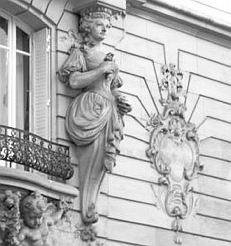 Poor Katinka. I don’t know her, but life’s not treating her well, absolutely not. And, even by comparison, I can tell you that Katinka is not doing anywhere near as well as Pauline, Sonia, and Jacqueline. It’s not fair, of course not, and not for want of trying or Katinka’s good nature, but that’s how it goes.

On a lovely building on a quiet intersection in the Sixth Arrondissement, Katinka has put up a sign. She doesn’t say if she lives there, which is a shame, because it’s a gorgeous babe of an apartment house and maybe I could get in touch with Katinka and see if the building is as stylish inside as it is out. And stylish it is. Constant Lemaire, the architect who designed it in 1905, placed two busty figureheads—worthy of a nineteenth-century whaler—on either side of the pretty window with the wavy glass au premier étage. True beaux-arts beauties, their faces are folded into deep simpers that suggest they are repressing a fart or have just been goosed and are trying to decide if they liked the experience. Possibly both or one each. Imagine how splendid the interior of Number Eighty-two could be.

Katinka isn’t telling if she lives in this building and will be at home to visitors at certain times on certain days because she has other things, sad things, on her mind. And she has expressed them clearly in the sign she has taped to the building.

On Wednesday evening, July 21, you cleaned out my apartment. I am not angry with you and I will not come after you. But the most precious thing for me is something that has no value for you, the video of our wedding. Please, I beg you, return it to me.

Here she has put her email address, otherwise I wouldn’t know she is Katinka. But she is not done, adding a postscript.

There is not enough room on the paper she has taped to the building, and covered with a plastic sheet to protect it from the wind and the weather, for the remaining and promised nine hundred ninety-six thanks, but the thought is clearly there. And so is the sadness—yet every time I have walked by the sign, for three weeks now, I sigh, then start giggling. And I am not alone. Many people stop, read the sign, look to the left and the right as if expecting the thief or Katinka at any moment, then smile, sometimes laugh out loud, and wander off.

Poor Katinka. She is so sweet, so polite, so strangely well-meaning, so detached, yet so earnest in her faith in sincere communication. Does she think that the thief, having made off with her earthly possessions and her possibly out-of-this-worldly wedding video, is cruising this particular street in Paris to see if he has foolishly taken something of no value to him but of immeasurable value to his victim and trying to find an internet address? Would he be moved?

Katinka really wants to reassure him. No, she’s not mad at him and promises not to come after him—not that he really needs to worry about either. Even supposing he had returned to the scene of his crime, can you imagine him sighing with relief at these words—and of course being moved to return the video, assuming he could remember which poubelle he threw it in as he sorted through his loot? It’s not that the thief is more unsentimental than anyone else. If someone has cleaned out your apartment, would the one thing—the irreplaceable thing—you’d want back be the wedding video? Not the old sepia picture of the great grandparents, the comfy chair, the beautiful mirror in the hallway, the teapot, or the warm and cuddly stack of euro notes in the sock drawer? The thief has—and had before—his own sentiments and acts on them. He and sweet Katinka are simply not on the same wavelength. Maybe, in all fairness, it never occurred to le cher voleur that the video could mean anything to anyone. Or of course he could have watched it and concluded that doing away with it would be a mercy and a way to protect Katinka, Monsieur Katinka, and their wedding guests from future blackmail.

I doubt the thief has a heart of stone. Katinka’s postscript, proposing that he get in touch with her from an internet café so that he may protect his anonymat, is moving and marvelously correct in this age of privacy protection and confidentiality. No, not a heart of stone. He has simply not seen the sign because the last neighborhood on earth he is going to take a stroll in is Katinka’s—or the other neighborhoods he’s ripped off recently. If he could see the sign, could be made to see the sign, no one would doubt that Katinka’s mildness, her distaste for threats or rancor, her gentle supplications, the many, many thanks, expressed or promised, and her concern for the dear thief’s privacy would move him—and no less would make the gargoyles on Notre Dame weep, melt the girders of the Eiffel Tower, and crack the dome of Sacré Cœur. But none of this will ever restore her wedding video.

The sign remains, often read, but clearly not getting the response Katinka desires and, I believe, deserves. Sad and unjust, especially when you realize that no more than a few centimetres away there are three little signs, with pull-off fringes on which are printed their cell phone numbers, from Sonia, Pauline—super panthère—and Jacqueline, all advertising massage. I can’t tell if their phones are ringing around the clock, but people have torn off the slips with the numbers, so some response is possible. There is hope for Sonia (whose note has a picture of her and a customer, both with terrific smiles), hope for Pauline, underscoring her panther-like qualities by explaining she is BLACK (evidently now a French word), and hope for Jacqueline who promises longer sessions for the same competitive price. Someone has paid attention, taken a phone number, and any minute now…

But as long as Katinka’s sign remains, the news is not good, no hope, not for her, not for us who pass it daily, read it, and sigh…