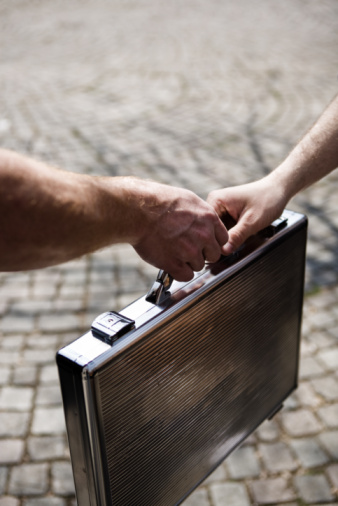 Is it just me or has someone else made the connection?

In 1870 the so-called Dépêche d’Ems had the French press in a tizzy as it discovered and published the current Prussian military assessment of its own strength relative to the might of the La Grande Muette (the French Army). The leaked dispatch was very disparaging, implying that the once-dreaded Vieille Garde which had taken Napoléon to the gates of Moscow could now be beaten, with one hand behind the back.

In France l’homme de la rue whipped himself up into a frenzy of indignation not unlike Monty Python’s Holy Grail French sentinel, farted in a generally easterly direction, while haughtily dismissing Bismarck as smelling of elderberries. And Napoléon III, self-proclaimed emperor of France took it very personally. Thus began the Franco-Prussian war of 1870. It was over almost as soon as it had begun except that after being soundly defeated as predicted, France was now somewhat smaller for the loss of Alsace and Lorraine to Prussia.

Napoleon III fled into exile and shame. France became a Republic and Paris went into a state of insurrection declaring a workers’ commune. The defeat was a festering sore which would go on weeping until the end of WWII. All that, some might say, the result of an organized leak.

Over the next thirty years, a somewhat chastened France smoldered with rage, humiliation, resentment and a burning desire for revenge. For centuries, France had seen la Perfide Albion (the English) as the hereditary enemy. After the crushing defeat of 1870, all the focus was on Prussia. After beating the French, the new Kaiser felt entitled to declare the First German Reich with himself as Emperor. Alsace became Elsaß. Lorraine became Lothringen. Imperial German battleships were named after the new states. German technology was showcased in Elsaß-Lothringen with a construction program of imposing public buildings and railroad stations in the most emphatic German gothic style.

It was in this climate of suspicion that the French Army High Command believed itself to be the victim of what today might be characterized as a leak. In 1894, a torn, hand-written Army HQ memo came to light. It appeared to reveal the existence of a traitor in its midst who was secretly feeding the German Military Attaché in Paris with secrets about the performance of a new French artillery piece.

After 24 years old German occupation of Alsace-Lorraine, the irrefutable syllogism of the day went thus: Many French Jews are of German origin, therefore by definition all Jews are potentially dangerous and possibly treacherous. Captain Alfred Dreyfus was Jewish and born in Alsace. He became the ideal culprit. Tried and convicted with childishly trumped-up “evidence”, Dreyfus was sentenced to spend the rest of his life in solitary on Devil’s Island. As is well known, the Dreyfus affair split public opinion. It took 12 years of campaigning, petitions and lawsuits as well as several changes of government to reverse the sentence and bring Dreyfus back to France.

So if it wasn’t Dreyfus, whose handwriting was on that infamous scrap of paper? As was well known by the Army counter-espionage service almost from the beginning, the real culprit was Count Walsin Esterhazy, another staff officer, whose motives were exclusively venal. When things got too hot and arrest seemed imminent, Esterhazy fled to London, where he lived out the remaining years of his life—ironically, not a few miles from the country house currently on loan to Julian Assange…

Leaks have always been used as casus belli. Of course we must always look at the action of the leaker but we also need to ask the question: “A qui profite le crime?” The Zimmerman telegram was a secret communication between the eponymous German Foreign Secretary (Secretary of State) and his Washington DC Ambassador in 1917, at a time when the USA was still neutral. The telegram advised of an increase in the U-Boat campaign to include the use of Mexican (also neutral) bases as friendly harbors. The telegram instructed the Ambassador to invite the Mexican government to join Germany as an ally. In exchange, Germany would ensure the return of Texas, Arizona and New Mexico to their original owner!

As an example of preposterous overpromising, the Zimmerman telegram has few if any equals in history. British code breakers could not believe their good luck.

When the Mexican president read the Zimmerman telegram and saw it for what it was, he immediately passed it on to his neighbor to the north, adding: we did not ask for this, we don’t want it nor do we support it. Quite naturally, when the US President Wilson read it on March 1st, 1917, he and the entire American people reading the Zimmerman telegram in their newspapers were hopping mad. Less than a month later, the USA came out of neutrality and the rest, as they say, is history. From the German point of view, its own action produced an uninterrupted series of unintended disastrous consequences.

Can we detect the unintended consequences of the Wikileaks dumps? Is Julian Assange a man who has changed history? Whatever he may think of his own role, it doesn’t seem likely that any indignant, offended nation, friend or foe is about to mobilize its army to redress some perceived slight when reading what some diplomat inside the State Department really, really thinks. As we are told all the juicy stuff about corrupt Karzai or incompetent British paras in Helmond or perfidious Pakistan, we are struck by the obvious physics of the way shit hits fans. Everyone gets splattered. It all cancels itself out.

Hillary Clinton relates an exchange with her Saudi counterpart. “Sorry you had to read that,” she said, or something similar. “You kidding, Hillary?” says the ambassador. “You should hear what we say about you.”

FAQ: The Hottest/Best Bistrot in Paris? After That, What?