Home Archives Burgundy in the Fall – Symbols of Solstice 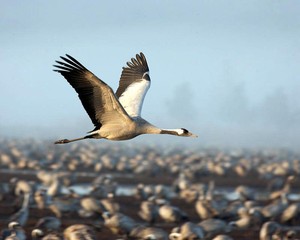 November.  The passage, overhead, of hundreds of thousands of ash gray cranes is as symbolic of the winter solstice, here in Burgundy, as are goats cheese, chestnuts and tangerines on the kitchen table.  Their cranes’ trumpeting call here can be heard long before they actually come into view.  Most of them will be returning north with the first signs of March, but one disturbing detail in the beauty of these yearly migrations, not all of the cranes will be leaving France. 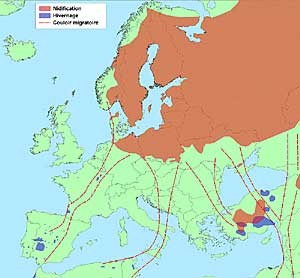 Most French people, even those of us who are lucky enough to live beneath the narrow 200 km wide corridor used by the cranes each year, know little about how or where they spend the rest of their time.  The majority will confuse the cranes with storks and tell you they spend the summer in “Alsace”.  In fact, the cranes’ two week Spring journey,much shorter than their Fall migration, takes them farther north to Scandinavia. There is still snow on the ground when the cranes arrive in Sweden from the end of February to the beginning of March. Once their nuptial dances finished and the mating accomplished, the couples will leave Hornborga and spread out to establish their nests for the most part in Sweden, Finland and Russia (in brown on the map)

The cranes’ large nests, made of dried grass and built at ground level, are made to receive one to two eggs. The eggs are watched over by both parents for four weeks, until the young hatch.  Able to follow the parents within days, the offspring take flight by mid-July, feasting on insects, shellfish and small vertebrates.  Once adult they will turn to eating mainly plants and berries.  The families stay united until the end of winter, but the young will only be mature enough to reproduce after 3 to 5 years.  Cranes remain faithful to one partner for the rest of their lives.

The Fall migration is much longer than that of the spring.  Half of the cranes migrate by waves of three or four days during October and November, the other half in December.  The current flights are taking them down to the blue areas, located  in southern Spain, North Africa and Turkey.  For their trip south, the majority of these “grues cendrées”, in French, have gathered once more in Sweden, this time on the island of Öland.

As they swing down to Spain, nearly 70% of all of the cranes stop at a half-way point in France, the Lac du Der-Chantecoq.  Located near Troyes, in the Champagne-ardenne region 200 km east of Paris, the Lake is easily accessible by the A-5 highway, direction Nancy for those who might wish to attend the bi-yearly event.  It’s free, but there are rules including a specified distance to be respected in order not to disturb the birds.  You’ll want to arrive before sunrise so croissants and a thermos of hot coffee, a warm jacket and binoculars are also advised. 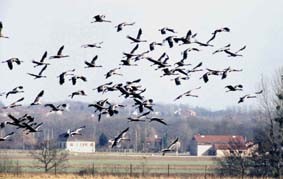 It isn’t unusual to observe up to 150,000 to 200,000 cranes during the season.  Some 206,582 were tallied officially on the Lake for just one day, November 11th of this year!  With an abundant supply of food leftover after the harvest such as corn in nearby fields, and a plentiful supply ofaquatic plants offered by the Lake’s 48 km² area, no wonder more than 20,000 cranes usually winter on Lac du Dar.  The Lake’s accomodations are also a growing attraction as more and more of both Spain and Scandanaivia’s forests and marshlands are disappearing to development. 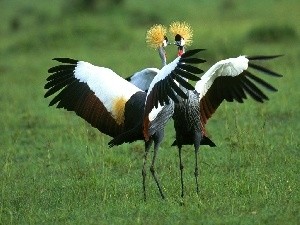 Cranes can live up to 30 or 40 years. Note that, though a protected species since 1967, the ash-gray crane still has enemies including hunters and increasing use of pesticides. Nonetheless, we find more and more of them nesting permanently here in Burgundy.

A few years back, the town of Cosne s/Loire, where I was teaching in the Nièvre, turned off a part of their street lamps to assure that a crane, which had opted to spend the night on a lamp post, ran no risk of electrocution. Actually, he (or she) had spent the afternoon perched on the roof of our middle school and the same crane spent the following night, of all places, on the roof of our house, four kms away! 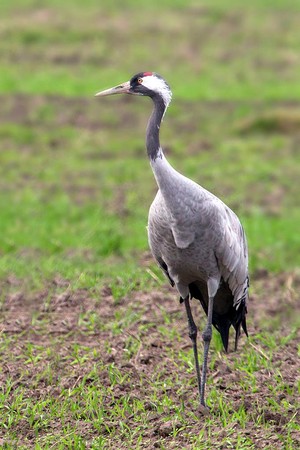 However flattering it may be that this new “immigrant” population should favour France, the fact that they apparently don’t feel the need to travel either north or south, does seem to confirm that global warming is not a thing of the future.

After the warmest October in 114 years, we are presently experiencing one of the warmest Novembers on record here and disasterous flooding is repeately taking its toll in lives and material in the south of France.  Scientists tell us that one day soon, Bordeaux wines will be a thing of the past and much of France will be as warm as North Africa is today.  The question, at long term, may well become:  Will we humans be wise enough to listen to what these “wise birds”, the cranes, have to say before we and they both find it necessary to begin “nesting” together in trees?

Map 1 of migrations and cranes in flight over field: http://champagneardenne.lpo.fr/grues/synthese_migration_grue_02_03.htm