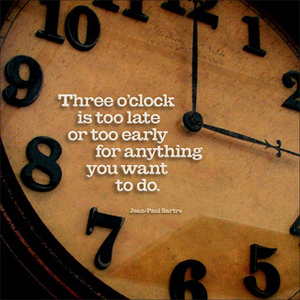 Trois heures, c’est toujours trop tard ou trop tôt pour tout ce qu’on veut faire. Un drôle de moment dans l’après-midi. This time, anyway, Sartre got it right—and perhaps that explains why this is the most famous pair of sentences he ever wrote. Most of the time, notwithstanding the elegant aphorisms sprinkled throughout his novels, he gets on my nerves. But, three o’clock in the afternoon is a strange moment, just too late or too early to undertake anything. I agree because today I am living proof. Merci, Jean-Paul.

It’s a few minutes past three. After a very late breakfast or a slightly early lunch with a friend in Saint-Germain and a walk over to a small museum where the exhibit, which I had imagined would take a good part of the afternoon, turned out to be worth forty-five minutes—and only that long because I had paid five euros for the doubtful pleasure—I am perched on a bench under a sycamore and wondering, appropriately for three o’clock in the afternoon, Now what? There’s another museum I’ve been promising myself to visit, but by the time I get there, and certainly there will be a wait to get in… no, that won’t do.

About fifteen minutes from my bench there’s a hotel with its own café that caters to American tourists and where I have, every once in a while, passed the time of day, at least, by charming (or you could call it hornswoggling) couples, though more often just single américaines, but considering my recent luck and encounters with women, this seems to be the worst idea I’ve had in months. When all else fails, I always take a walk, and that is what I do now, hoping for inspiration along the way if not something truly wonderful or weird.

And then it’s four o’clock. I have crossed the river… it took me two tries. The first time I started across on the Pont des Arts, and as soon as I saw the padlocks on the fence, the padlocks signifying undying, unbreakable love with the keys drowned in the Seine, I was so dispirited that I turned back, walked upstream and took the Pont Neuf. Safely across and then along the quais eastbound, a left turn into the Marais and finally with a slight right, toward the Eleventh Arrondissement. And all I have discovered is that four o’clock, or twelve past, is the new six past three. This is not going well, this isn’t going at all, and the best I can figure is to go home, get a book and then sit myself down in my café and with luck Dominique, the cadaverous waiter, will have something strange to tell me… provided business is slow and he didn’t get mugged again.

The street I take is not the most direct—it’s not as if I’m in a hurry—but a favorite at almost any time because it’s crooked, at least here and there, and so narrow that a bus stopping for passengers stops everything else, usually in both directions, which sometimes provides comic relief. Most of the shops and cafés and the occasional hotel (is there a block in Paris without one?) are a little down at the heel, and the street life reminds me of swarming bugs. Trust me, it’s not on any list of things to see in Paris which is a pity and a shame because, to my eyes, this looks more like Paris than most places visitors go. And, the bonus, if you follow it all the way to the end, you’ll pass the Smokers’ Museum, almost always closed, presumably for oxygen therapy, and wind up, fittingly enough, at Père Lachaise. You will also pass, along the way, an Italian restaurant that I like for its carbonara and the waiter, one of the two Arab brothers who own the joint, singing along with Sinatra on tape. And like you, I pass it now.

Saïd is standing in front of the restaurant with a fairly short man and both are looking at the ground between them. I am near enough to them to see they are talking, if not yet close enough to make out what they are saying, and they seem earnest, each with a hand cupping the chin, a sign of deep thought—or an effort to conjure up a deep thought or two. They are beginning to shake their heads as well. As I come up to them, Saïd sees me, sticks out his hand, asks how I am, then points at the ground and asks me what I think of … that. 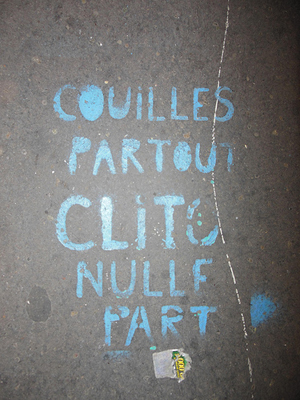 That is five words, spray-painted with a stencil in bright blue. I look, I shrug, I laugh—which may, historically, have been an improvement on I came, I saw I conquered—but the shrug and the laugh are not doing me any good in the smaller man’s books. Definitely a Parisian, he asks me if I understand, if I realize the full horror in blue paint at my feet. Yes, I say, I understand perfectly, it’s not that hard, and provide the polite words for the unmentionable ones in blue paint to prove the point. Here:

“It’s disgusting,” he says, reading the sign out loud word by slow word: “Balls. Everywhere. Clit. No. Where. Disgusting!” No, it’s just dumb, conneries féministes. “I find it shocking, really gross.” Well, at my age, I assure him, it’s pretty hard to shock me. “May I ask you how old you are?” Yes. “Well, how old?” I tell him. He frowns. And you, monsieur? He is seven years younger, and so has just lost his hammer, his presumed age advantage to lecture me on my youth and inexperience. And since I had already shown him that I understood the words, he is fresh out of tools to hit me with, though I’m wondering if I can make him fly off the handle.

You know, I tell him (Saïd is holding his peace), not only is it dumb, but it’s not even an original connerie. “What do you mean?” It’s based on something else. “On what? The bullshit radicalism of ’68?” No, radicalism of 1851. It’s what Victor Hugo said about Louis Napoléon’s government. Police partout, justice nulle part. So, if you want, you can call it unoriginal feminist crap. No doubt it is his peaceable nature and of course my advanced years, not to mention my knowledge of French history, rather than the ten centimetres I have on him, that keep him from taking a swing at me. He turns to Saïd, excitedly speaking of “some people” who understand nothing, have bad taste, and would, no doubt about it, laugh at their own mother’s funeral.

This is boring, and I figure I need an exit line… when a very imposing woman comes up to the three of us, looks at the blue stencil on the pavement, lets out a rather deep laugh, then starts saying in a voice that bounces off the buildings on both sides of the street, Génial! La classe! The little Frenchman, eyeing this Amazon, decides he’ll just sidle off and Saïd has to get the tables ready for the early diners who start arriving not much after five from the hotel fifty metres down the street, leaving me alone with the giant, who glares at me. “And you? Do you also disapprove of that?”

By this time I’m laughing hard enough to wet my cheeks and maybe my pants. Ouais, génial, mon frère, Right on, bro’! I’m all for it, pal. And what about you? You can’t have it both ways…monsieur. He stares, then asks how I knew he was un travelo. Because, I tell him, you were laughing. The women who painted that have no sense of humor. You had to be a guy in drag…which makes the joke better, you know. He bursts out laughing again. So do I and, as I go, I promise him I won’t tell a soul…

…except you. I’m feeling chipper because Sartre may have got it wrong after all, provided you’re willing to wait until after four to reclaim three o’clock in the afternoon, but he also did say that the most ordinary event becomes an adventure just by starting to tell the story. 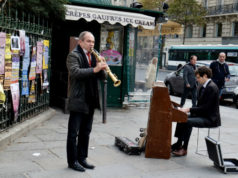 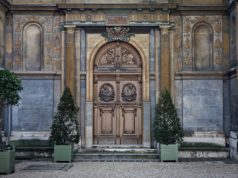 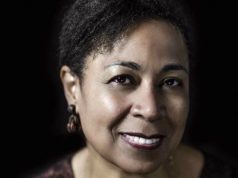 So You Want to be a Travel Writer in Paris?