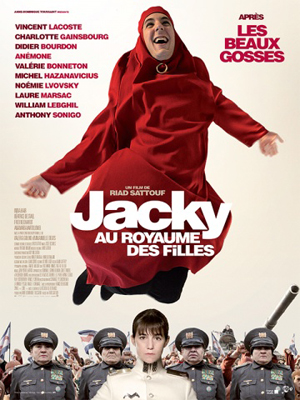 Riad Sattouf’s comic delirium literally translates as Jacky in the Kingdom of Girls, which indicates that it’s not quite the forward-minded spoof of gender attitudes that it seems. Jacky imagines a fantasy world where sex roles are reversed: women are macho brutes, the men snivelling harpies who wear chadors. This isn’t the first gender-reversal comedy—in the ‘70s, Norman Lear produced All That Glitters, a sitcom set against the backdrop of a multinational company, and the great comic novelist Thomas Berger wrote Regiment of Women [1] during the same period, when sex roles were first being upended. Nowadays the roles are being flipped even more: in the US, women are overtaking men in income and education, more children are being raised by single mothers (one notable example being Barack Obama). What does Jacky have to say about French attitudes about gender in the wake of François Hollande’s recent escapades? As is often the case in France, the answer is equivocal.

The film takes place in a strange desert land, where people are fed a disgusting soup pumped out of their faucets and vegetables are unheard of (when present they are precious commodities). The people worship Shetland ponies, the living versions of which are treated like sacred cows and oracles, and which are also the symbol of the governing regime. The film borrows liberally from 1984, with its grotesque Big Sister dictator (played by Anémone), grimly farcical executions, and telescreens featuring hilariously kitschy propaganda. 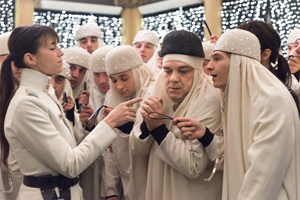 French comedies tend to succeed or fail on the basis of their actors, and Jacky is no exception. In the eponymous role, Vincent Lacoste brings androgynous feyness—and single-minded ferocity. After the death of his mother, Jacky becomes a servant to a family of louts led (when his wife isn’t looking) by Brunu (a comic foil wonderfully played by Didier Bourdon). Jacky’s out: a national mating ritual in which males compete to be the Grand Couillon (Great Imbecile) and marry the dictator’s heir apparent (Charlotte Gainsbourg, as a severe but magnetic straight-woman). Put-upon Jacky determines to win the competition in a role-reversed Cinderella. The plot isn’t all that inspired, but it works.

Complicating the Cinderella story is an anti-system subplot out of Orwell by way of Woody Allen’s Sleeper. Jacky’s friend Julin, a self-proclaimed “free man” who prostitutes himself, turns out to be leader of a rebellion. The two exploit each other in ways that are less than idealistic, but which give the film much-needed twists and turns. Julin (played by Michel Hazanavicius, better known as the director of The Artist), is also the most human (as opposed to man or woman) character in the film. 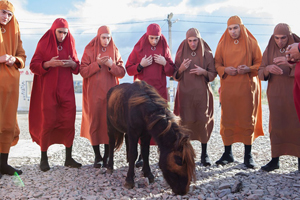 The director sometimes threatens to lurch into full-blown comic baroque, more overpowering than funny. But he keeps a fine balance between visionary surrealism and meat-and-potatoes farce. The more surreal moments are funny but oddly transcendent, as when a crowd of men in red chadors engage in a religious ritual that seems choreographed by Busby Berkley. Mr. Sattouf’s first vocation was as a comic strip artist. He draws a regular strip called “La Vie Secrete des Jeunes” (The Secret Life of Youth) for the satirical magazine Charlie Hebdo, about the travails of adolescents, and his first film, Les Beaux Gosses, was also about young people. It’s his empathy with the emotional lives of the young that keeps a real heart beating beneath all the farce in Jacky. 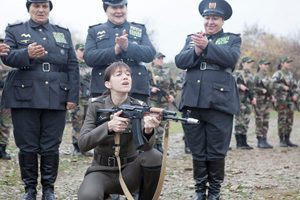 In addition to his atypical professional path, Mr. Sattouf has an interesting cultural background: he was raised in Algeria, Libya, and Syria before settling in Brittany. It’s probably the reason the fantasy dystopia of Jacky has a Middle Eastern tint, with its desert, chadors, autocrats and militarists, and parodies of religion. That may also be why his portrait of how gender roles deform the human spirit and personal relationships has a special force. But it also implies  that genderism is an exclusively Arab or Muslim problem. The rebel’s goal isn’t to overturn the system but to escape abroad, where things are presumably better. So we don’t really get any analysis of how gender is being upset in France—why there are all those demonstrations “pour tous.” But why think when you can laugh?