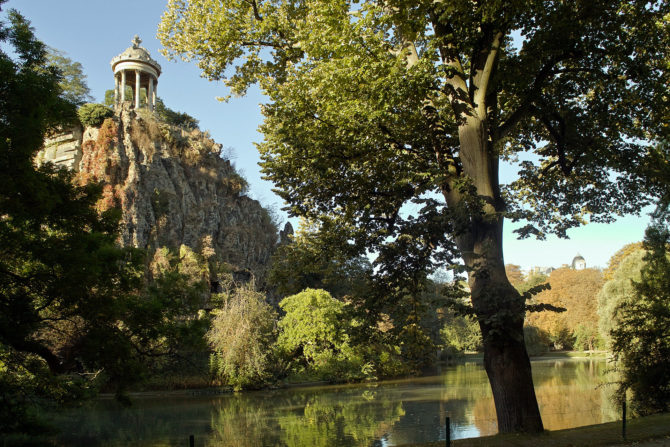 There are a whopping 470 parks and gardens in Paris. Here are a few favorites. Tip: Many of the larger parks offer free guided visits.

Inaugurated in 1867, the Butte Chaumont was by turns a gypsum mine, water treatment site and horse graveyard before becoming the hilly idyll for picnickers and joggers it is today. The park’s Japanese anglo-Chinese style breaks with the geometric tradition of French gardens, offering strollers a vigorous and varied experience. The park’s hard-to-miss centerpiece, the Temple de la Sibylle, inspired by the Temple of Vesta in Tivoli, rises 50 meters above the central lake, where a 32-meter waterfall adds a final flourish to this dramatic park. Show up before 11pm for a drink at the guingette-style café Rosa Bonheur.

While the Parc de Belleville is a relative newcomer– it was inaugurated in 1988– the hill on which is was built has a long history as a vineyard and 19th century Mardi Gras partying ground. Today the 45,000 square-meter park offers some of the best views over the city, a novel playground designed with the help of local residents and open-air theater performances. A 250 m2 plot of vines is a nod to the area’s winemaking past. 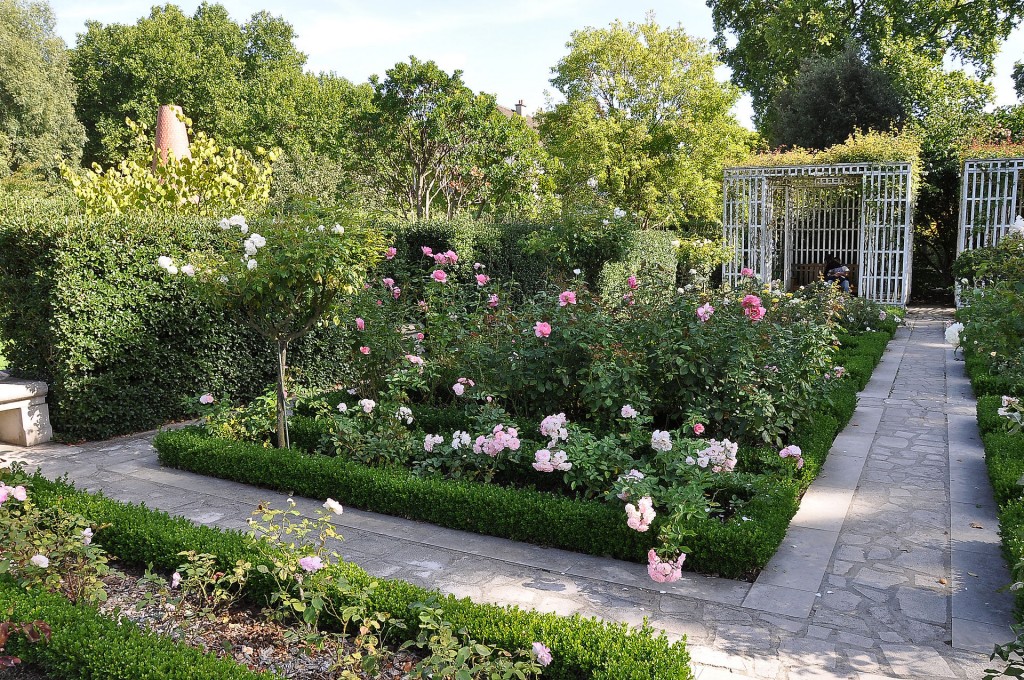 Built on the site of what was once Paris’ largest wine depot, Parc de Bercy is a delightfully varied park. Stretching from the Palais Omnisports de Paris to the Cour Saint Emilion, the park’s three sections each evoke a different set of themes (natural elements, seasons and colors). Pick your way through vegetable gardens and orchards in the Parterres; relax with a book or take a stroll in the Grande Prairie and admire Canyonaustrate, Gérard Singer’s cascading water sculpture; or find a quiet corner in the Jardin Romantique and watch the ducks dabble in the artificial marsh. A 400-plant vineyard pays tribute to the days when “joyeux Bercy” drew all of Paris to imbibe on cheap wine. The workshops and conferences offered by the Maison du Jardinage are an educational way to spend a Saturday, but fill up fast.

Built in 1852, la Petite Ceinture, a 22-kilometer-long belt of railway circling the city and one of the world’s first suburban transport systems, carried goods and passengers until 1934. Abandoned in 1993, the tracks were gradually overrun with wild grasses, and eventually became home to over 270 species of animals and plants. What to do with all that disused railway has been a topic of debate among city leaders: several sections have been transformed into biodiversity corridors open to public promenading; others have been adopted by local communities and turned into gardens, like the popular Jardins du Ruisseau in the 18th arrondissement. Abandoned train stations at Porte de Clignancourt and Saint Ouen have been renovated to house cafés and cultural centers. 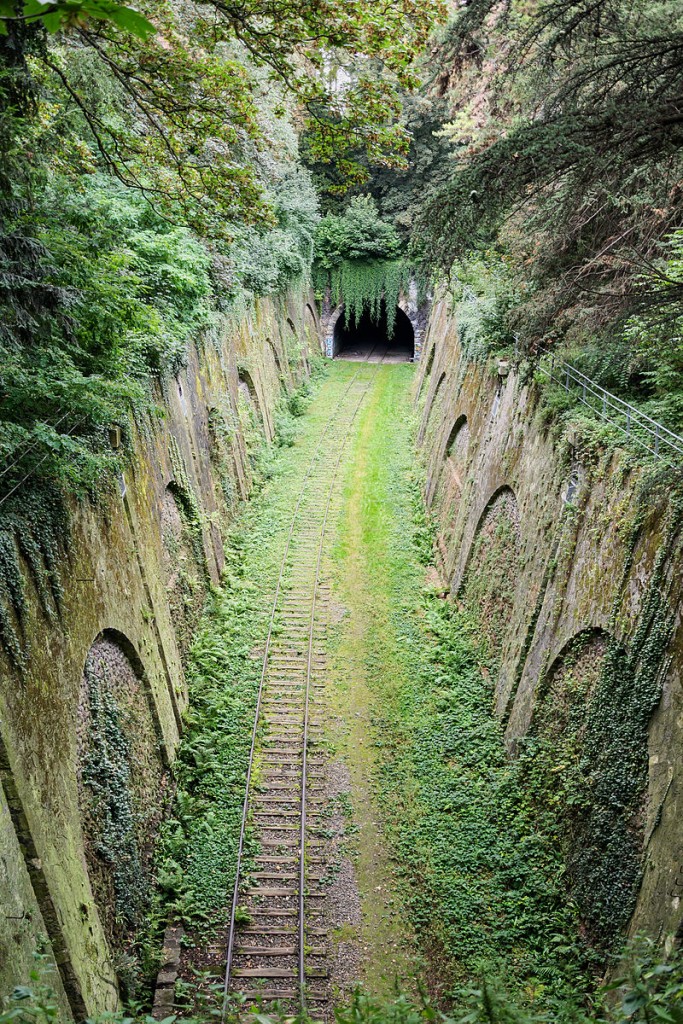 The Petite Ceinture where it traverses Montsouris by Myrabella/Wikimedia Commons

Stretching 5 km from Bastille to Vincennes, this elevated garden walkway was the inspiration for New York’s High Line. Built in 1986, la coulée verte, another name for the park, is an often overlooked gem, which keeps the crowds down. Bamboo forests, rose gardens and water features add variety to the straight-as-an-arrow path along the former train tracks, which is popular with joggers. The curious will have a hard time resisting a peek into the apartments that rise several stories alongside the promenade.

The Jardin Atlantique is an unlikely marine-inspired oasis perched atop the Gare Montparnasse. Built in 1994—despite the enormous technical difficulties of creating a 3.4 hectare garden above a parking garage—the Jardin Atlantique marries the geometric precision of French gardens with the lush vegetation of their English counterparts. The garden celebrates the historic connection between the Gare Montparnasse and Brittany: white, mauve and blue perennials imitate the colors of the ocean, while the 12 pillars that support the garden call to mind the skeleton of a ship. Kids will love the marine-themed playground, while the Ile des Hesperides sculpture fountain with its thermometer, rain gauge and weather-vane will amuse adults.

This former royal garden is actually many gardens in one–as well as home to the Museum of Natural History, several greenhouses and a small zoo. In 1635, the Jardin des Plantes appeared in its first incarnation as the Royal Garden of Medicinal Plants before becoming the Museum of Natural History in 1793. The 4,500 plants in the central flowerbeds are presented by family and species or arranged according to their economic or medicinal importance–all labelled, of course. A favorite is the Alpine Garden, filled with 2000 mountain plants hailing from as close as the Pyrenees and as far away as the Himalayas. But there’s more to do than petal-gaze: get lost in the labyrinth or take a ride on the Dodo Manège, a carrousel of extinct and endangered animals including the dodo, the Barbary lion and the horned turtle. 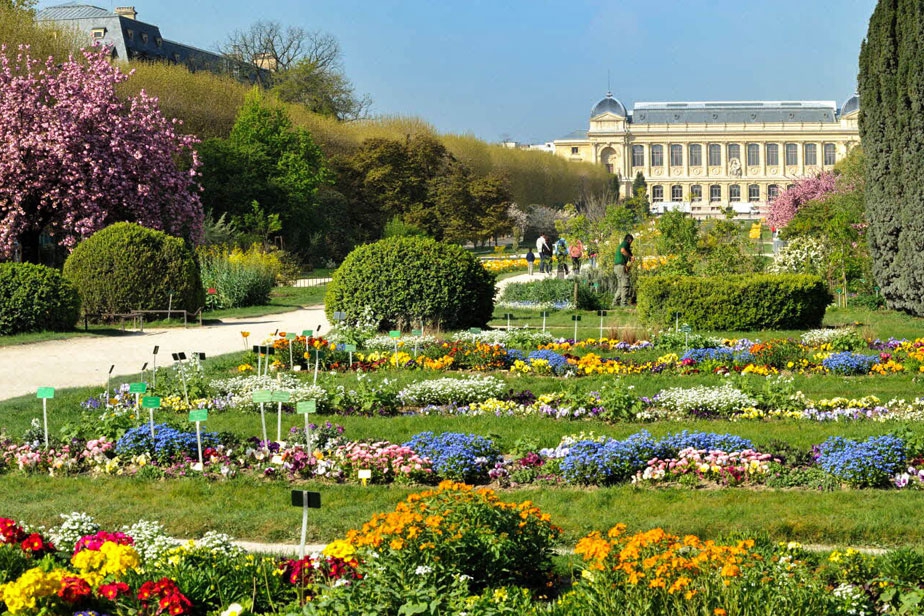 What happens when you let 2000 square meters of land go to seed in Montmartre? The Jardin Sauvage Saint-Vincent. This bit of abandoned land is now home to native trees and shrubs, a pond and a diverse population of wild critters. The city’s gardeners look after this biodiversity hotspot, but it’s largely left alone.

Created in 1995, this garden throbbing with life shares a boundary wall with Père Lachaise cemetery. The park is composed entirely of plants indigenous to Paris and is maintained by city gardeners without pesticides and with little physical intervention. Behind the gated brick entrance, amblers will find shady forests and wildflower strewn meadows–a bit of untamed wilderness in the clamoring city. Check the kiosk for open-air exhibits.

While not technically a park, the Seine riverbank nonetheless becomes the city’s biggest playground come spring. The riverbanks have evolved along with Paris since the first quays appeared in the 16th century. A main artery for transportation and trade, the Seine was a hub of activity, lined with taverns and public bathing houses. Today, two kilometers of riverside (starting at the foot of the Musée d’Orsay) offer gardens, skate parks, cafés, athletic spaces, art installations, cultural pop-ups and more, providing visitors of all ages with a waterfront playground easily accessible by bike or on foot. Floating gardens, hammocks and deck chairs offer plenty of opportunities for waterside loafing. Check out the fountain serving up eau petillante!

Located in the Bois de Vincennes, La ferme de Paris is a working farm complete with sheep, cows, vegetable gardens and a pond. During the week, learn about sustainable agriculture in conferences and workshops held by the farm’s master gardeners, and come back on the weekend to put permaculture techniques into practice on one of the many working projects open to the public, like the spiral herb garden. The city of Paris follows a strict organic gardening chart that precludes the use of pesticides and herbicides– La Ferme de Paris is, happily, no exception. 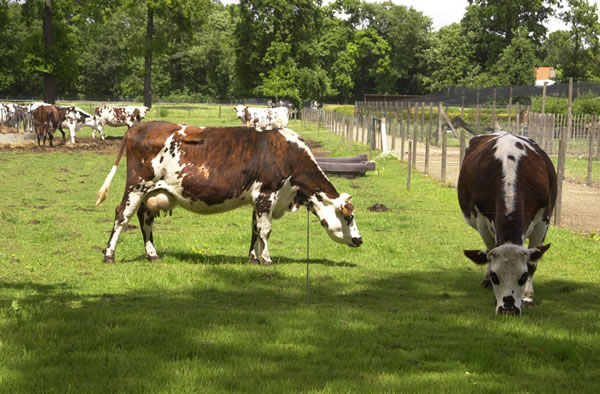