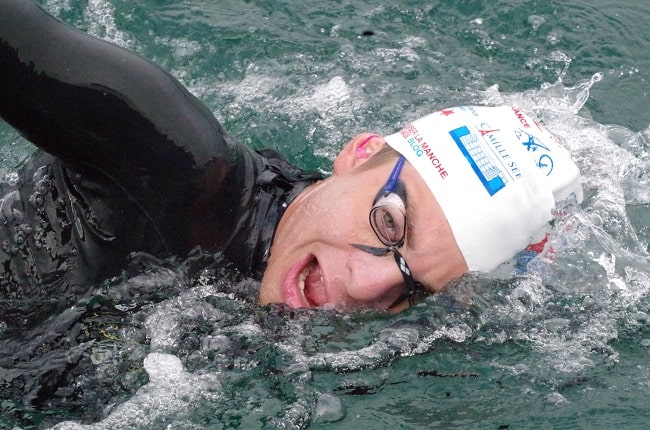 He’s been a dedicated swimmer since he was three-years-old. “In 2018, I took part in several open-water races in France, finishing second cadet in the 25km of the French Championships and that same year I became the youngest Frenchman to swim the English Channel,” he says.

After his bold swimming experiences in the polluted waters of Dakar and the Seine, Germain became passionate about sharing his respect for water and nature with the world at large.

“At the beginning of 2020, I set myself a new challenge, the culmination of years testing my resistance in extreme conditions. For the last eight months I’ve been studying nature, learning how to survive in forests, preparing myself physically and mentally. I’ve taken several three-day kayak outings along the Seine- one trip was on the coldest day of the year. It was -7 ° on the outskirts of Troyes,” he recalls.

Impressive! So, how does a confirmed vegetarian, who weighs 62 kilos, train for this extreme marathon? By swimming 10km twice daily in the eco-friendly Piscine Elizabeth, situated at Porte d’Orléans in the 14th. “I’ll be pulling a kayak, containing my equipment, including my survival kit, making it more difficult to swim, so I’m testing it in the pool.”

“I lose too much weight and am gluten intolerant,” he admits. However, with advice from naturopath Marie Sicot, Germain’s diet is based around red and white beans, lentils, rice, cereals and seasonal fruits. “I always eat fruit at the beginning of a meal, it’s better for the digestion,” he says. In Paris he recommends SOYA Cantine Bio, a chic urban space in the 11th arrondissement.

Germain will swim the crawl, as, for him it’s the least tiring stroke. “The difficulties will be both athletic and mental. I hope to cover 15 to 20 km daily for 52 days from June 6th- July 28th.” He’s inspired by the likes of Philippe Croizon, the French athlete and first quadruple amputee to swim the English Channel, and ace adventurer Mike Horn.

The weather conditions will make Germain’s challenge super tough. For the first 70km the water might be below 16 degrees. He’ll swim five to six hours daily, without assistance, dragging the survival kit of hammock, tarpaulin to sleep under, plus a tiny stove to heat his food. He calls it total immersion. There’s no music. “Never swim with music,” he says, “listen to the music of the water, think, get into a rhythm.”

The Seine meanders through four major cities, and there are power plants and other industrial sites along its course, but there’s also biodiversity and nature. “My goal during this adventure is to illustrate the beauty of the river. The immersion that the 52 days of solo swimming brings will be supplemented by the scientific background, acquired during my volunteer time with Tara Foundation. This journey will help me understand how biodiversity works and the impact of pollution in the Seine. As a keen photographer I’ll take advantage of the trip to film, not only the beauty but also the pollution,” says Germain.

“And, because the Seine is horribly polluted, and I could get infections, I’ll follow the sanitary protocol of the Paris Civil Protection River Brigade. Doctor Raphaël Petit, who monitored me on the Channel swim, will check up on me regularly.”

Arthur will use crowdfunding platforms to finance the swim, which he thinks will cost in the region of €20,000-€50,000. “I’m determined to be positive. I don’t want to demonize industrialists or base my message on a policy of guilt. On the contrary, I want to show that the Seine deserves to be preserved for its richness, that we can only benefit from the diversity it offers by respecting it.”

The Seine offers varied landscapes, sometimes rural, sometimes urban, interspersed with natural parks and industrial sites. “800 tons of visible garbage will be thrown into the river during the 52 days of my challenge – this horror is really what inspired my swim. My role will be to share these different aspects, leading to a better understanding. Let’s get cleaned up before the world comes to Paris for the Olympic Games 2024, when open-water events are set to take place on the Seine, and let’s get people bathing safely in the Seine.”

Germain’s swim will be the equivalent of 31,200 pool lengths (in a 50m pool). It will take him beneath 321 bridges, the first 5m long (Seine- Source Bridge), the last 2141m (Normandy Bridge). And it will cross 360 municipalities – including Le Havre, Troyes, Rouen and Paris.

Raising public awareness of the protection of the Seine means first of all showing the life that goes on around it, the journey will be punctuated by convivial meetings along the way. “I’m hoping to contact schools who will follow me throughout the swim. I’ll transmit my discoveries and share my love for water and nature with them.”

For the future Germain intends to set up an association dedicated to exciting eco-experiences dans la nature. “We’ll take off, swim, sleep, discuss ideas, listen to the birds, be at one with nature.”

When thinking ahead to this summer’s epic feat, he says, “I know I’ll have to face the cold, loneliness, lack of sleep, and physical pain to reach Le Havre from the source of the Seine – I’m almost ready. My parents have confidence in me and my partner Denise is a tremendous source of inspiration. I couldn’t continue without them.”

Bravo Arthur! See you on the river. Follow his adventure here!

Previous Article Letter from Paris: March 10, 2021 News Digest
Next Article Should the Zinc Rooftops of Paris Get UNESCO Recognition?