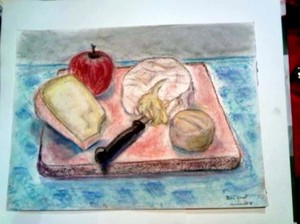 A few years back, I prepared a newspaper article on California’s Lamancha goats.  In case you don’t know Lamachas are an earless breed of goat reputed to be “typically American”.  I was told that even if goats’ ears, like their hooves, were used to perspire, Lamanchas were great milk producers.   I always thought these strange animals were just another West Coast whim, until I learned that  “earless goats” actually originated in Cordoba Spain. They were first exhibited at the 1904 Paris World’s Fair and the breed goes all the way back to the 15th-century when Spanish missionaries first introduced them to California!

So why this interest in goats?  It’s true that I do have a foible for goat cheese especially in green salad with walnuts, olive oil, balsamic vinegar, and hot Dijon mustard vinaigrette dressing.  Then again, autumn wouldn’t be a season without a ripe crottin de Chavignol alongside a juicy autumn pear and nothing beats bits of goat cheese in place of cream to top off a bowl of piping hot, homemade nettle soup.  Hard to choose when it comes to French cheese. 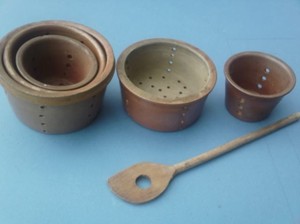 I’ve actually gone through the process, in the past, of making my own goat cheese from neighbours’ milk.  All it took was rennet, called “présure” in France, available in most pharmacies.  Curing cheese demands just the right bacteria to give it its distinctive flavour.  Such bacterial molds are usually found only in places like deep stone cellars, old rock walled mountain barns or wherever the cheeses have been cured up until then.  It’s just such processes that account for the diversity in both taste and texture of France’s nearly 400 varieties of cheese. In this case, it was simply a three day process of bringing the still warm milk to a creamy curd similar to yogurt, then straining it from the buckets into clay containers and serving it fresh with chives, chopped onion, salt and pepper.

Not to confuse oil lamps and manure

Sancerre and Chavignol are located about 25 miles south from St Fargeau.  That’s not far, but on one side of the river, the St Fargeau side, you’re in Burgundy.  On the other side of the river it’s the Berry, a sort of border so to speak, between two foreign lands.   Times were when Bourguignons and Berrchons didn’t marry.  There’s a saying in French, “Il ne faut pas mélanger les torchons et les serviettes.”  You mustn’t confuse dish towels and linen napkins.  Something like mixing apples and oranges, except the Berry is often referred to as “Deep France”, La France profonde.  Dish towel realm so to speak, as compared to bourgeois Burgundy.  When I moved to the Berry region shortly after meeting my future husband, you might say it was “love at first sight”, with the man and with his region.  Both were inseparable.  All I had to do was open my mouth and my American accent gave me away.  Then again when my spouse said “Ca va ?” you could just as easily  guess his central France origins.  Bona fide locals all sit down on their circumflexes, as in “châaaateau”, and wait for the goats to go by.

“Oh, please, don’t let him ask me any questions!” I heard myself praying as I sat perched across the kitchen table from my future father-in-law for the first time.  Grasping the local dialect was anything but simple.  Still, certain words come easily when you hear them over and over again.  One of these words was “crot”.  Pronounced [crow] is what most French today would call a “marre”, a pond where runoff water gathers.  In local dialect the word means “a hole”, a place along the river or stream where women washed their laundry, instead of in wash houses.  The clay from the sides of the crot was used to make the molds that strained and shaped the goat cheese, but the peasants also used the clay to make the small oil lamps drawn on to light their barn when milking time rolled round.  “Crottin” in French happens to mean manure, but in this case it was the name given to these small oil lamps. The lamps, in turn, gave their name to the goat cheese.   By the way, if you’ve never tried milking a goat, let me assure you, the goat also knows it’s your first time.  Success comes with practice…I guess. 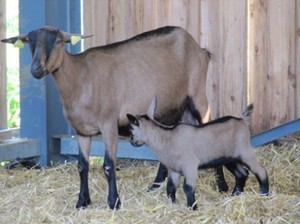 Another common expression only found in the region is “moder les chèvres”.  I also guess you could translate it something like, “I take my knitting and my little stool and I follow my herd of goats along all of the back paths in the nearby woods for about three hours every afternoon while they chew on brambles, fresh grass, dandelion leaves and whatever fits their fancy, so that when we come home their milk has developed the taste of the local soil that fits in so beautifully with sauvignon wine.” Chavignol cheese and a glass of Sancerre wine go hand-in-hand.

As is often the case in the most renown vineyards of France, the area was once a prehistoric sea, and the clay and limestone  soil is packed with millions of oyster fossils.  The village of Chavignol is located in a glacial cut just behind the hill that houses the Sauvignon capital of the world, the historical village of Sancerre. If you are in the area, the auberge Le P’tit Goûter, in Chavignol, is a great spot to visit.  Their trays of local delicatessen and of goat cheese at all degrees of maturation are to die for. 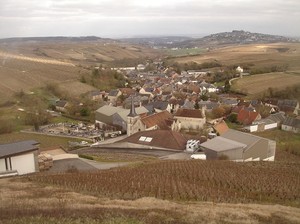 Chavignol in winter, with Sancerre and the Loire River in the background

All is fair in love and Belote

Winter can be long in the country and one common activity in the Berry is card game competitions.  Few people play poker, outside of casinos.  The most common card game in France is called belote.  Played with tricks, it is a simplified form of bridge that keeps village men around tables up to closing time in local cafés.  Like bingo or pétanque, belote competitions are also common money making source for schools and local associations on weekends.   One memorable evening, my husband and I took part in a local belote competition.

The first prize was a leg of cured pork, the second a cured pork shoulder, then the rest of the animal, which included our winnings.  When it finally came down to the consolation prize the organizers rubbed their hands with glee as two women showed up to claim their due.  The “master of ceremonies” disappeared for a moment, then came back leading an old billy goat on a rope.  My husband swore that the poor animal would wind up in a field with a herd of delighted she-goats somewhere on the women’s way home.  May my many vegan friends forgive me when I admit I’ve eaten “cabrito” for Christmas in Portugal and  I’ve also eaten just plain “goat” in my time.  Whether goat tastes like cheese or cheese like goat I’ll leave for other non-vegan friends to debate.  I still prefer imagining an astonished husband arriving home that evening and discovering a goat in his bathtub.

An American friend’s son lamented recently, “Before my mom left California and went to France on vacation, we used to talk about all sorts of interesting things, books, history, science….  Now all she wants to talk about is white wine and goats’ cheese.”  Whatever the goat, ears or no ears, all I can say is, “Go for it, Girl!”

Five handfuls of fresh nettles.  (It’s ok to use gloves.)

Run them under boiling water to take the sting out of the leaves.

Heat three tablespoons of olive oil in a stewing pan.

Remove the stem and add the nettle leaves.

Cover with water.  Salt and pepper to taste.

Bring to a boil and cook until done.

Pass the mixture in a blender.

Serve hot with a dash of fresh cream or goat cheese. 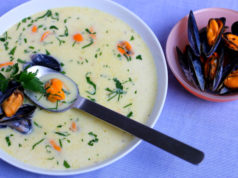 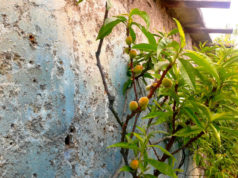