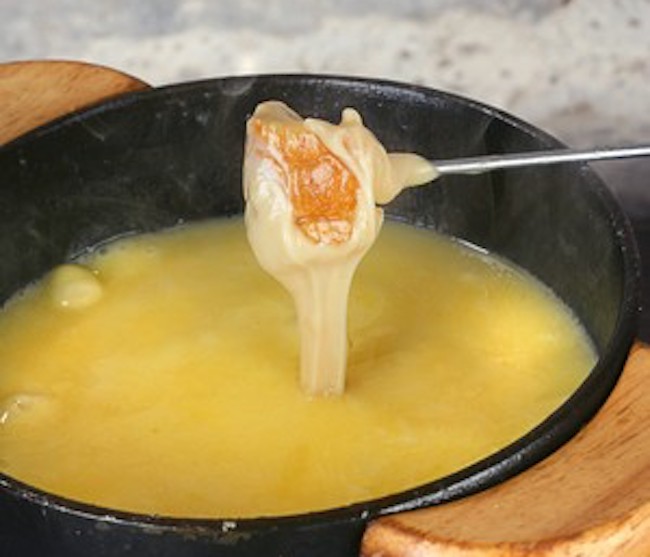 I must admit, I have been guilty of such a memory lapse myself. While I enjoyed fondue now and then in New York, in an inexpensive Midtown restaurant near my office in the 1980s, I completely forgot its pleasures until a few years ago, when I re-encountered the dish in France. This time, the fondue was made with Comté the French version of Gruyère.

I first discovered Comté in the summer of 2003. I was vacationing in the South of France, when that historical heat wave struck. My husband and I thought we might escape the infernal South-of-France furnace if we buzzed up north to Alsace for a week. On our way up there, we stopped a few nights in Arbois, in the French department of the Jura, on the border near Switzerland.

Everywhere we went, we were served Comté, sometimes as a little appetizer with glasses of Vin Jaune, the local wine; other times as an ingredient in a local dish.

I was smitten. Although Comté is basically a Gruyère-style cheese, it tasted so much more deep, wild, intense, and flavorful than the Gruyères I’s encountered stateside.

A couple years later, as a guest of the Comté Cheese Association, I got the chance to taste a Comté Fondue from La Petite Echelle, a restaurant and inn located in the Jura Mountains of France. The cheese brought irresistible nutty, fruity, toffee-like flavors to the dish.

Ever since that trip, I’ve made my fondue with Comté. And now, I never forget what a great thing a proper fondue truly is.

This recipe comes from La Petite Echelle, a restaurant and inn located in the Jura Mountains of France. Dairy cows are also raised on the property for the production of Comté cheese. The restaurant serves traditional local dishes, and fondue is the highlight of the menu.

1. Combine the grated Comté, wine and garlic in a fondue pot and cook over low heat, stirring often, until the cheese melts.

2. In a small bowl, mix together the cornstarch and Kirsch.

3. Once the cheese is melted, add the mushrooms for flavor (if using), along with a few leaves of fresh Asperula Odorata or herbs (if using). Stir in most of the cornstarch mixture and bring to a simmer. The fondue should be thick enough to richly coat the back of a spoon. If it’s too thin, add more of the cornstarch mixture until you reach the desired consistency. Season the fondue with freshly ground black pepper and/or a pinch of ground cumin, if desired.

4. Serve the hot fondue with cubes of French bread for dipping.

Photo by the Comté Cheese Association/CIGC

Wini Moranville is the author of The Bonne Femme Cookbook: Simple, Splendid Food That French Women Cook Every Day, and the co-author of The Braiser Cookbook. Follow Wini on Facebook at Chez Bonne Femme.

Previous Article Photo of the Week – January 18, 2013
Next Article Driving in France