Frank Van Riper is an American photographer whose work has been published internationally, and is found in the permanent collection of the National Portrait Gallery in Washington, D.C. His 1998 book of photography and essays, Down East Maine/A World Apart, was nominated for a Pulitzer Prize. He is a widely read photography columnist at TalkingPhotography.com and for many years was the photography columnist of The Washington Post. Before that he served as White House correspondent, national political correspondent and Washington Bureau news editor for the New York Daily News. A former Nieman Fellow at Harvard, in 2007 he was awarded the Distinguished Achievement Award from the University of Maine at Machias for his outstanding career in journalism and photography, and in 2011 he  was inducted into the City College of New York Communications Alumni Hall of Fame.

Van Riper is also a popular teacher and lecturer. He and his wife Judith Goodman jointly teach photography workshops in Maine and in Umbria, Italy, and they are the coauthors of the best-selling book of photography and essays, Serenissima: Venice in Winter. They are currently working on their next book, with the working title, The Green Heart of Italy: Umbria and its Ancient Neighbors. “This will be the first of my books to be all in color—the images that we made over the course of more than ten years of workshop teaching all over Umbria are sumptuous,” he says. Van Riper recently took the time to answer Janet Hulstrand’s questions about his most recent book, Recovered Memory: New York & Paris 1960-1980. 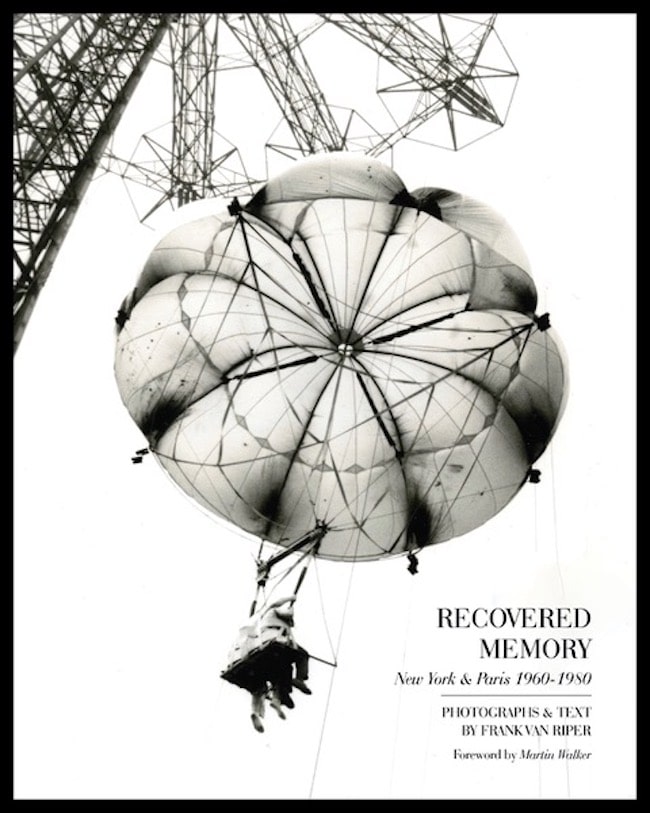 Janet Hulstrand: When is the first time you were in Paris? And what do you love most about it?

Frank Van Riper: The first trip was in the late ‘70s, with my first wife, visiting our friends, Neil and Carol Offen, who had moved to Paris as freelance writers. The quality of the morning  light was the first thing I loved about the city—it seemed to bathe everything in a golden wash. Then there was the elegant symmetry, and stunning architecture. The food and wine weren’t bad, either.

Janet: You were born and bred in New York: what do you love most about it?

Frank: I think any New Yorker would ultimately say the city’s energy is its greatest calling card. There is an air of possibility in the Apple that seems to say you can do whatever the hell you want, if you work hard enough. Part of it simply may be that one is not limited by one’s location—you can get damn near everywhere on the subway—and at any time. The NYC subway remains for me one of the world’s modern miracles. Finally, the mix of cultures and races in the city adds to its vibrance. This is not to say things are ideal—Covid-19 has thrown a tragic light on society’s inequities—but I am proud of the way NY has battled the disease and, with the help of its ballsy governor, has seemed to battle this &^%$! virus at least to a temporary standstill. This stands in stark contrast to the criminal incompetence of the Trump administration—not to mention the monumentally stupid actions of the mostly southern states who, following Trump’s dictates, have reopened way too soon.

Janet: I found it interesting that you respectfully differ from the great E. B. White in saying that in fact New York IS like Paris. How so?

Frank: It may be a stretch, I admit, but I do find, especially at the high end, that NY and Paris share a sense of style, brashness and flair. And let’s not forget the subway, which I think is very important. The Paris Metro binds the city’s parts together—just as the NYC system does in the Apple.

Janet: But these two cities are also (obviously) quite different in many ways. Can you comment on the most striking, or important, differences between Paris and New York as you perceive them?

Frank: Flanerie, for one. No one really strolls in New York, but in the Paris of my fond memory this was possible every day—and there were myriad cafes in which one could interrupt one’s wandering for an espresso or a ballon rouge. Also, in terms of aesthetics, Paris seems more at one with the water around it, as opposed to New York, where the Hudson, etc., is a presence only at the edges. Paris’s bridges are a marvel—and lovely to see at night. 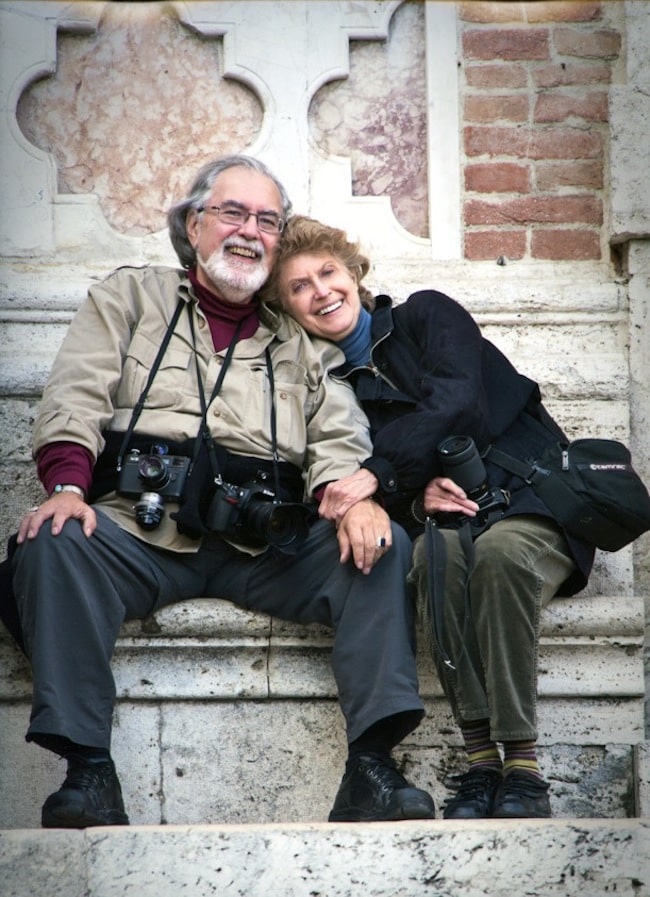 Janet: How did you come up with the idea for this book? And why did you choose the years 1960-1980 as the period you would focus on?

Frank: The timing of the book simply reflects the timing of my life. I knew I had a good archive of images from the NY of my youth. (Believe it or not one of the oldest photos in the book, “Ferry Bench,” was made when I was in high school, cutting classes with a friend to once again go out shooting.) My Paris archive started with that first trip with my first wife Chris, after our friends decamped there. The city mesmerized me, and I made a conscious point to return and shoot more: once on my own after my divorce, and then with Judy, before we were married. That trip was our first together overseas and we both were a little anxious about how it would work. No need to have worried, and Paris helped.

Janet: This is primarily a book of photographs, but it also graced with your beautiful– and often witty– prose. What do you think some of the significant differences are (if there are any) between seeing the world through the eyes of a writer, and of a photographer?

Frank: Not really much of a difference, just in terms of the tools used. Writers and photographers both are storytellers. The literal meaning of photography is ‘writing with light.’ In each case, the person must be bound by the notion that everything is material, and let nothing get in the way of creating the written narrative or the photograph. There is another practical side to this: I love being both the writer and the photographer. Practicing one skill sharpens the other, I feel, and the final product, done right, creates a synergy that is more than the sum of its parts.

Janet: I’d like to say a word also about the excellent quality of this book as an object. You very kindly sent me a copy, explaining that it wasn’t really possible to appreciate its beauty by looking at a digital version, and you were so right! There are many subtleties, probably, in the quality of the reproduction of the photographs that my (writer’s) eye is not really able to discern. But the very weight of the book, and the beautiful quality of the paper that it is printed on, is impossible not to notice. Do you want to say anything about this aspect of the book? Who are the unsung heroes behind creating a work of such unusually high quality?

Frank: I’m delighted you like the look of the book as much as I do. I am a bear about the quality of my books— so far I have been very lucky; they all have been beautiful. Doing illustrated books is increasingly expensive, but I feel it simply is not worth doing if the product is going to look shoddy. Happily, this time I had a wonderful designer in New York, Ursula Damm, who created, I think, a stunning book. We hit it off on our first teleconference (we have yet to meet in person) when we started chatting about favorite typefaces—one of mine is Bodoni Bold. I knew then we’d be fine. I suggested two different paper stocks, one for the photos and one for the text, and Ursula came up with the glossy bright white for the photos, and an elegant, heavy, textured cream stock for the text.

Also, I struck gold in getting bestselling author Martin Walker of the famed Bruno, Chief of Police novels to do the foreword. As I note in the book, I did not know him at all, but a mutual friend and fellow journalist Bob Cullen did. Bob did the email introductions, and Martin came through with his eloquent reminiscence of both cities that was the perfect introduction for my own words and photographs. As it happened, Martin was in town when I had my book launch at Politics & Prose in Washington, D.C., and he showed up for it. I was delighted to be able to gratefully acknowledge him in the packed audience.

Janet: What do you most look forward to doing the next time you’re able to be in Paris? And in New York?

Frank: For Paris, I simply look forward to wandering the city with a camera and notebook early on a sunny Sunday morning, then having a lovely bistro lunch. I will have to ride the metro again—it has been way too long. I would like to channel Atget a bit, photographing the scenes and architecture of this magical place—while also paying homage to Cartier-Bresson, Doisneau and, now, Peter Turnley, by recording the people I see.

For New York, post-pandemic, my very first thought is to take Judy on a whirlwind of going to the theater, something we have sorely missed of late—and which New York does better than anyone.