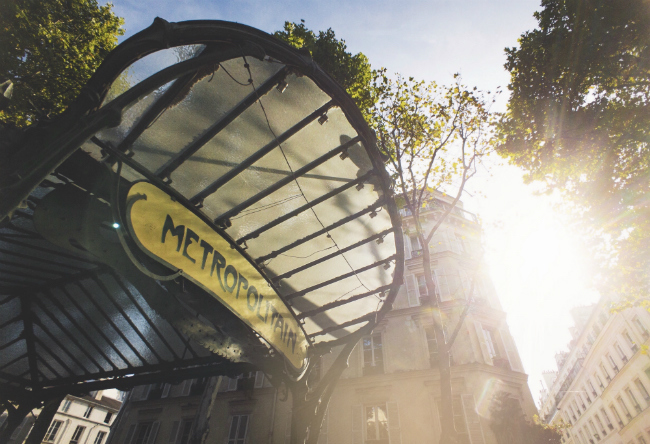 Corey Frye, also known as “A French Frye in Paris,” spends much of his days pounding the cobblestones in Paris as he leads tours around the city. Along the way, he spots wonderful panoramas, cafés, historic sites, and more. These “Paris Moments” he shares with Bonjour Paris readers in a column featuring the Photo of the Month. (View past editions here.) Enjoy!

Oh the horror! It looks like wet spaghetti…the green is too German…it’s much too sensual — in fact don’t bring young women too close or they’ll get certain ideas…

At the Abbesses metro station in Montmartre you’ll find the answer to why Paris outshines most cities. The only remaining “Model A” entrance, conceived by Art Nouveau phenom Hector Guimard, reminds us of that Parisian paradox that while today it feels frozen in time, the city once made its name by flinging itself into modernity at every turn.

As only the second city in the world to build an underground train system (London was first), Paris decided to trumpet its new feat of engineering loud and clear via these “dragonfly entrances”, as they were colloquially called. Not only did they serve to encourage uneasy Parisians to descend into the city’s bowels for the first time, but they were a message, like the locomotive stations and grand department stores before them, that Paris was on the cutting edge.

The Art Nouveau entrances were inspired by vines and flowers and the female form. Even cats, some say. They seemed to burst right up out of the ground, undulating and twisting their way skyward. This style had its detractors for sure (see above), but in the end the metro entrances represent exactly what makes Paris Paris. It’s a city that always aimed for the aesthetic, choosing to enhance the landscape rather than settle for the quotidian or the practical.

Sadly many of these entrances disappeared as Art Nouveau fell out of fashion. While certain modern copies have been made, only two authentic “dragon fly” models remain: the one in this photo (transferred here from Hôtel de Ville), and a “Model B” entrance at Porte Dauphine.