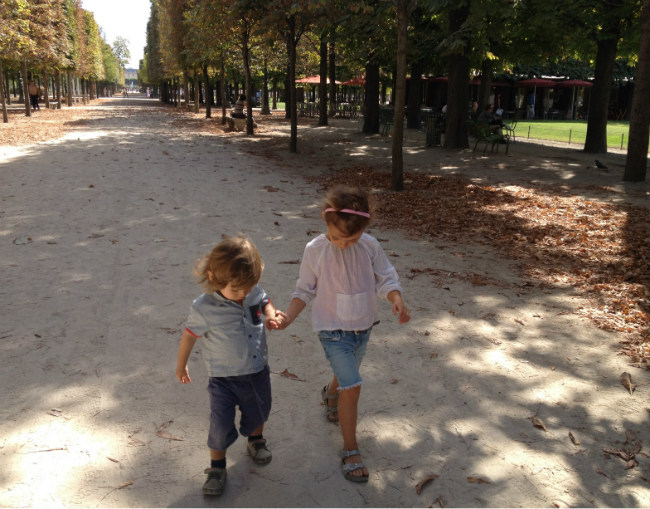 In the Jardin des Tuileries/ photo by Daisy de Plume

With many of Paris’s parks dating to the 17th Century, the history of each one is worthy of tomes. One thing they all have in common is seasonal entry hours (generally dawn to dusk), which are posted at entrances. All are packed with history, art and practical playground delights. Here’s a list of Hidden Kid Treasure as well as garden “Spillover” for the whole family to enjoy.

The Royal Garden Jardin des Plantes was designed by Louis XIII’s doctor, Guy de la Brosse, in 1635. After it was opened to the public, it fell to disrepair until Colbert was named administrator and had the medicinal plants and allées rejuvenated by leading botanists of the day (including Jussieu, whose name graces the nearest metro station).

HIDDEN KID TREASURE: A special treat for Parisian tots is a labyrinth where they can climb in the hallowed-out bushes and secretly make their way up to the next level while parents toddle up the spiraling dirt path. The conical maze is hidden behind the Art Deco Winter Garden (serre in French; the hot house is also worth dipping into). With terraced levels being crowned by a looking-point gazebo, the labyrinth looks a bit like a massive green ziggurat. It’s a delightful treat for kids, but perhaps agree to a special whistle prior to letting your kids run free, as it’s easy for them to get lost in the maze! Or agree ahead of time that they’ll find you at the apex, sitting in the gazebo, so they know to climb up. (Can you tell my 5-year old has scared himself getting lost there aplenty?) 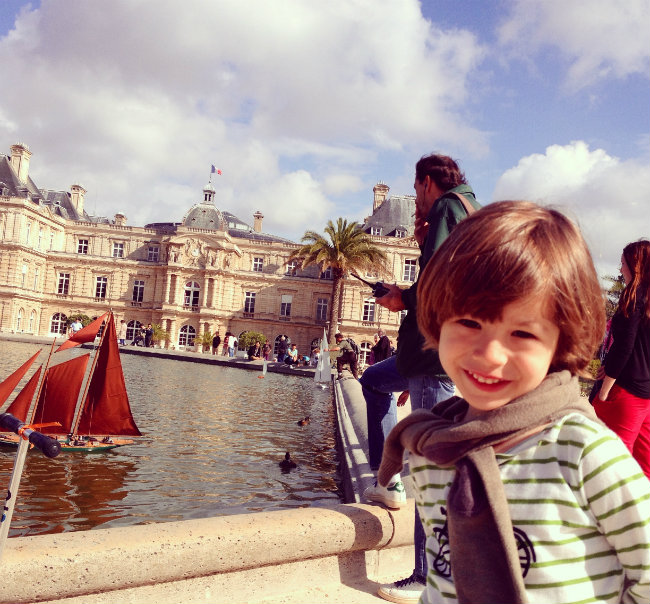 The terraced gardens of the Left Bank’s Jardin du Luxembourg are a playground for both kids and adults. (You’ll find city-run tennis courts and a canopied area for chess players, as well as the 19th century Rucher du Luxembourg where adults can learn about how to care for bees and harvest honey from the garden’s hives.) The gardens were originally laid out to accompany Marie de Medici’s Palais du Luxembourg, which now houses the Senate. The 1620s palace was meant to replicate the Dragon Lady Queen of France’s childhood home, Florence’s Pitti Palace, and the gardens were inspired by Florence’s Boboli Gardens. The gardens have so many delights for kids (Napoleon dedicated the 25-hectares to the “Children of Paris”), that it’s a challenge to highlight one.

HIDDEN KID TREASURE: Since the delicate and discreet Merry-Go-Round is the oldest in Paris, I nominate this for our hidden treasure list. Designed by Charles Garnier, of Opéra fame, this 1879 weather-beaten carousel has the added attraction of having a “Jeu de Bagues”, where kids try to spike iron rings onto their sticks. No easy feat for those older kids on the peripheral circle of horses (and mesmerizing for waiting parents: the attendant re-loads the rings with hands as fast & graceful as a gazelle!). Unlike many of the city’s other carousels, Garnier’s animals swing from above.

SPILLOVER: Too many to name! The 25 hectares host a delightful pony trail, 1920s boats you can stick around the boat basin, a Punch & Judy-like puppet show and one of the city’s best playgrounds, tailored to all ages. (Paid entry, with a guarded gate.) For artsy families you can go statue-stalking as there are 106 sculptures to track, or for photo buffs there’s always a photography show exhibited on the garden’s fences, or of course you can check out the temporary exhibitions at the Musée du Luxembourg at 19, rue de Vaugirard (12€/adults). 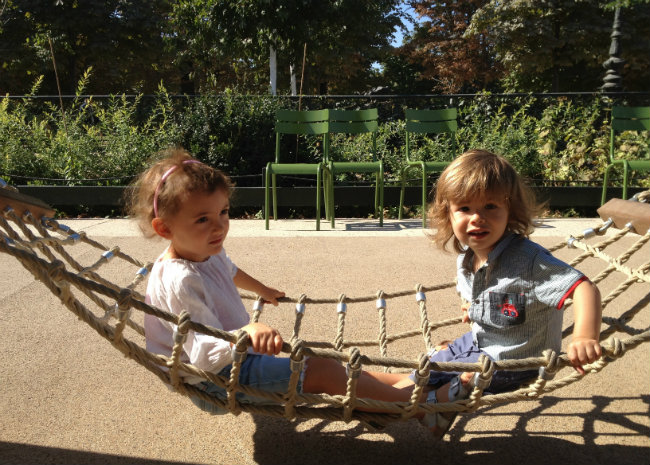 The Florentine de Medici family also left its mark on the other major Paris park, the Jardin des Tuileries. After Queen Catherine de Medici, Marie’s elder, was widowed by Henri II, she had the Tuileries gardens built for her Palais des Tuileries (1564); both the gardens and palace got their name from the tile factories which they replaced (tuile means tile in French). The 23-hectare gardens we know today — which connect the Louvre, where the kings lived, to Place de la Concorde, where French monarchy came to an abrupt (and bloody!) end — date to 1664 at the hand of André le Nôtre, Louis XIV’s Versailles gardener. (By no coincidence, le Nôtre’s grandfather had been a Tuileries gardener when it was Catherine’s stomping grounds.) From a kid point of view the Tuileries has plenty to offer, from a wonderful playground with a behemoth jungle gym, popular hammock and roundabout, to two lovely boat ponds for feeding the ducks or pushing the 1920s boats with sticks, not to mention a carousel.

HIDDEN KID TREASURE: It’s easy to miss the sunken trampolines that are off the Tuileries central allée. They’re at about the level of the WH Smith bookstore, between the carousel and Place de la Concorde, yet plenty of Parisian parents don’t know about them. Separated from each other with padded edges, these trampolines cost €2.50 for 5 minutes a pop. They’re available for kids from 2 to 12. (Although my son, Storsh, was too young at 2 to understand what to do other than watch the older kids bouncing like a basketball.) It’s a great way to get their energy out after a morning au Louvre!

SPILLOVER: For the artsy families you can go sculpture scouting for the likes of Maillols, Rodin, Giacometti, or more modern Dubuffet and Roy Lichtenstein. More formally, two museums overlook the Place de la Concorde side: view Monet’s waterlilies at the Musée de l’Orangerie or stop off at the Jeu de Paume, which often has excellent photography exhibits. 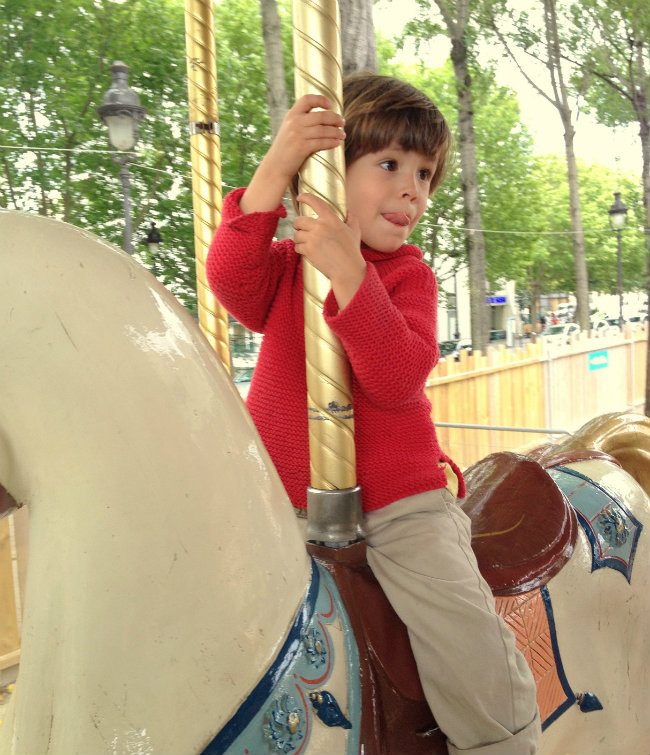 a merry-go-round in Paris/ photo by Daisy de Plume

Previous Article Serendipitous Discoveries in Paris: A Magic Moment in the 8th
Next Article Take the Cheese: A Guide to Bringing French Fromage Across U.S. Borders