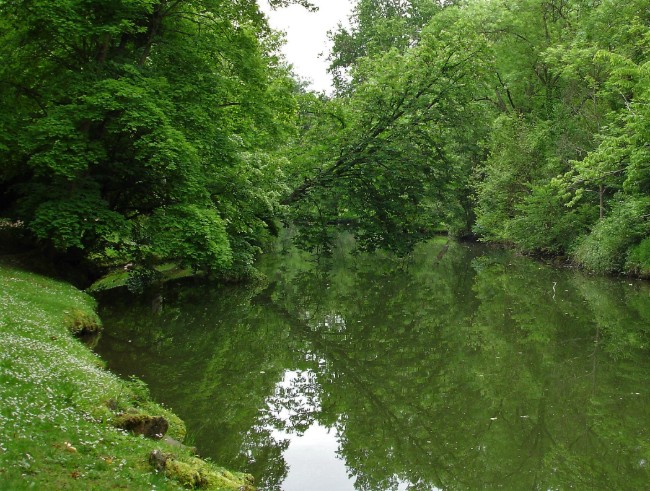 Yerres, France bills itself as “L’Autre Capitale de l’Impressionnisme” – The Other Capital of Impressionism – and an exhibition of the work of native son Gustave Caillebotte, who spent a good part of his youth there, helps explain why. The exhibition, “Caillebotte À Yerres – au temps de l’impressionism” (Caillebotte in Yerres – Time of Impressionism), which runs through July 20, is at Propriété Caillebotte, the eleven-hectare estate Caillebotte’s father bought in 1860, when Caillebotte was twelve years old. From 1875 to 1879, a period of barely five years, Caillebotte painted some of his most important paintings at Yerres, and the exhibition explores the influence on his art of those bucolic surroundings.

Located twenty minutes southeast of Paris along the Yerres River, the property includes the Ferme Ornée, site of the exhibition; the main house, called Le Cassin; a potager, or kitchen garden; an orangerie; a chalet; and a large park. With his parents, two younger brothers, and servants, Caillebotte seems to have lived a privileged, happy life. 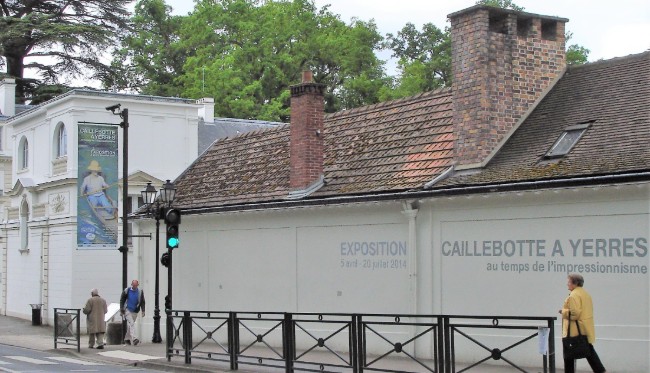 Caillebotte’s name may not be as well-known as those of other impressionist painters, but he is every bit as good an artist. After completing his legal studies, Caillebotte, at age twenty-five, enrolled in the École Nationale des Beaux Arts de Paris. In 1876, at age twenty-eight, he participated in the Second Impressionism Exhibition with seventeen other artists including Degas, Monet, Pissarro, and Renoir, who became his friends and whom he helped financially by buying their paintings, paying their rent, and regularly lending them money.

Caillebotte’s boyhood home and the surrounding park, the river, and nature inspired him and were to play an important role in his work, as demonstrated by the forty-three paintings brought together for the first time in the exhibition.

Water, particularly the Yerres River, is the subject of the first room. Among the paintings is a most harmonious and luminous triptych – “Pêche à la ligne” (Fishing), “Beigneurs, bords de l’Yerres” (Bathers, Edge of the Yerres), and “Périssoires” (Canoers), all painted in 1878. Caillebotte presented the triptych as decorative panels at the Fourth Impressionist Exhibition in Paris in 1879, and they embody all the elements of Impressionism: use of pure color, colored shadows, broken brushstrokes, impasto, the depiction of ordinary subjects, and perhaps most important, the depiction of light and its ever changing qualities. The warmth and evanescence of the light in these three paintings – both in the shimmering water and in the light playing on the leaves of the trees, heavy with foliage – are such that the viewer feels as if they are outside looking at the scenes in real time. 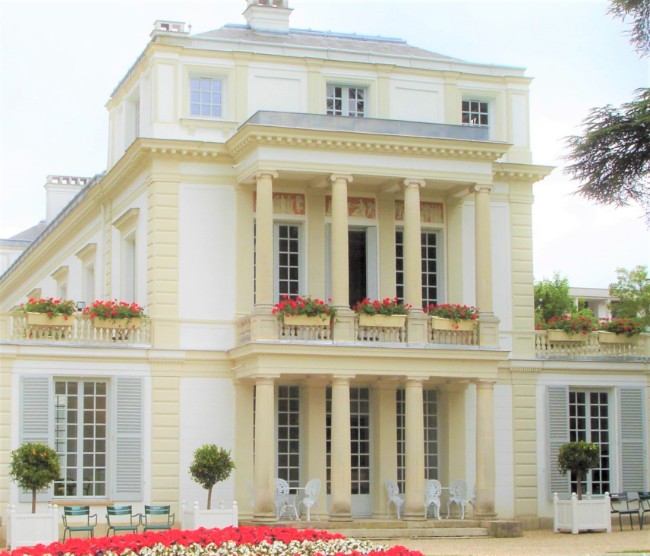 Those familiar with Caillebotte’s work will recognize “Partie de beateau,” sometimes called “Boater in Top Hat,” painted in 1877–78, which depicts a man dressed in city clothes, including a tie and top hat, rowing a boat while gazing off in the distance. The composition of the painting is one for which Caillebotte was to become well-known – an approaching foreground, in which the rower looms large, and a plunging background, a technique perhaps most dramatically executed in the recently restored “Rue de Paris, temps de pluie” (Paris Street, Rainy Day), painted in 1877 (but not included in this exhibition).

The paintings in the second part of the exhibition, which continues on the next floor, portray changing nature, including the movement of water, the shadow cast by leaves, the wind, and the infinite variety of colors of the sky. “L’Yerres, effet de pluie” (Yerres, Effect of Rain), painted in 1875, shows the play of light on, and trees reflected in, the ripples of water. It is raining, but it is not a somber painting. Rather, it is idyllic. The diagonal line of the lower riverbank in the foreground contrasts with the vertical line of the trees across the river. Caillebotte was noted for integrating these contrasts in his work, and this painting was considered particularly original for its time.

There are earlier paintings by Caillebotte in this second part of the exhibition, such as “Bruoy, le port de Soulins” (Bruoy, the Port of Soulins) and “Yerres, dans le Ferme” (Yerres, the Farm), both started in1872, which show the artist before he had perfected his technique and talent. While not the quality of his later work, they are instructive in terms of his evolution as a painter.

Paintings of scenes from the estate, which include “Le mur du jardin poteger, Yerres” (Wall of the Poteger Garden, Yerres), “Vue du jardin de l’artiste et de la vallée de l’Yerres” (View from the Artist’s Garden and from the Valley of Yerres), and “Le Parc d’Yerres” (The Park of Yerres), all painted in 1877, present idyllic, pastoral scenes.

Caillebotte’s “Le Boulevard vu d’en haut” (Boulevard Seen from Above) is also presented here. Painted in 1880, it shows what was then a totally new perspective, looking down from a Haussmannian building above. The light and the effects show Caillebotte’s knowledge of Japanese paintings.

The exhibition ends with a slide show of black and white photos showing the property through the different seasons.

Two movies related to the exhibition – one on Caillebotte and one on Impressionism – are shown in the main house, Le Cassin. Each is nearly an hour long, so if you don’t want to spend two hours watching movies, see the one on Caillebotte, titled “Gustave Caillebotte ou Les Aventur de Regard,” which explores Caillebotte’s work in detail. It also explains the great complexity of some of his work by deconstructing two of his paintings and illustrating the angles and placement of the elements depicted.

The Propriété Caillebotte was sold in 1879, after the death of the painter’s mother, ending the Yerroise period of his work. In 1881, Caillebotte acquired a property at Petit-Gennevilliers, on the banks of the Seine near Argenteuil, and in 1886, ten of his painting were included in the First Impressionist Exposition in New York. Caillebotte moved to Petit-Gennevilliers permanently in 1888, and he died there in 1894 at age forty-six while working in his garden. He is buried in the Père Lachaise Cemetery in Paris.

Exhibition narratives about Caillebotte’s work are in both French and English, although the English translations could have used the editing of a native English speaker. They are nonetheless informative, and you’ll get the gist. A catalogue is available.

There are two restaurants on the property – the informal Espace “restauration rapide” à l’Orangerie, where light fare and drinks are available, and Le Chalet du Parc, a more formal, and pricey, French restaurant.

The grounds and restaurants are open to the public, and the Propriété Caillebotte is well visited. In the town of Yerres, which purchased the property in 1973, there are many places to buy food for a picnic, which can be eaten on the grounds. Through August, boats and canoes can be rented for use on the Yerres River.

Visiting Yerres is an opportunity to view a fine exhibition of one of the greatest Impressionists and to get a flavor of a small city in France. It makes for a most pleasant and aesthetically pleasing daytrip.