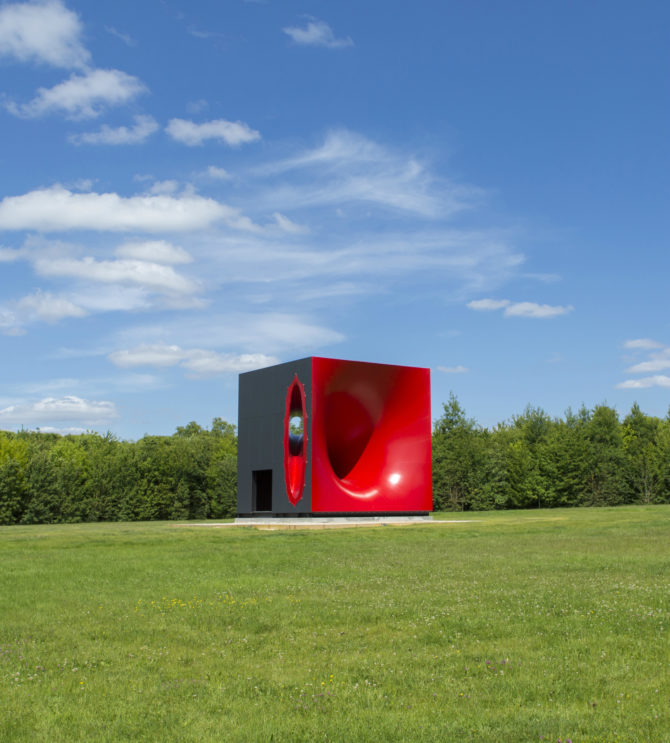 For the annual Summer Exhibition, British artist and sculptor Anish Kapoor is invited to display works in the gardens at the Château de Versailles. He’s inspired, but not intimidated, by the magnificence and the history of the location.

“Versailles giant vagina causes stir in France”, reads a headline in The Local newspaper. For many, the Palace of Versailles and its spectacular gardens, designed by André Le Nôtre, represent architectural excellence, perfect taste, and classic French style elegance. Since 2008, Versailles has boldly introduced controversial contemporary art exhibitions to attract new visitors in an attempt to confirm that these works can be successfully shown in the middle of grand historic settings.

The Bombay-born, Britain-based artist was selected by Versailles’ Palace President for the Summer Exhibition 2015. Anish Kapoor says, “Just placing objects here is no use, I decided to upset the balance, create chaos and have a modern day dialogue with André Le Nôtre who was born on the same day as me.” 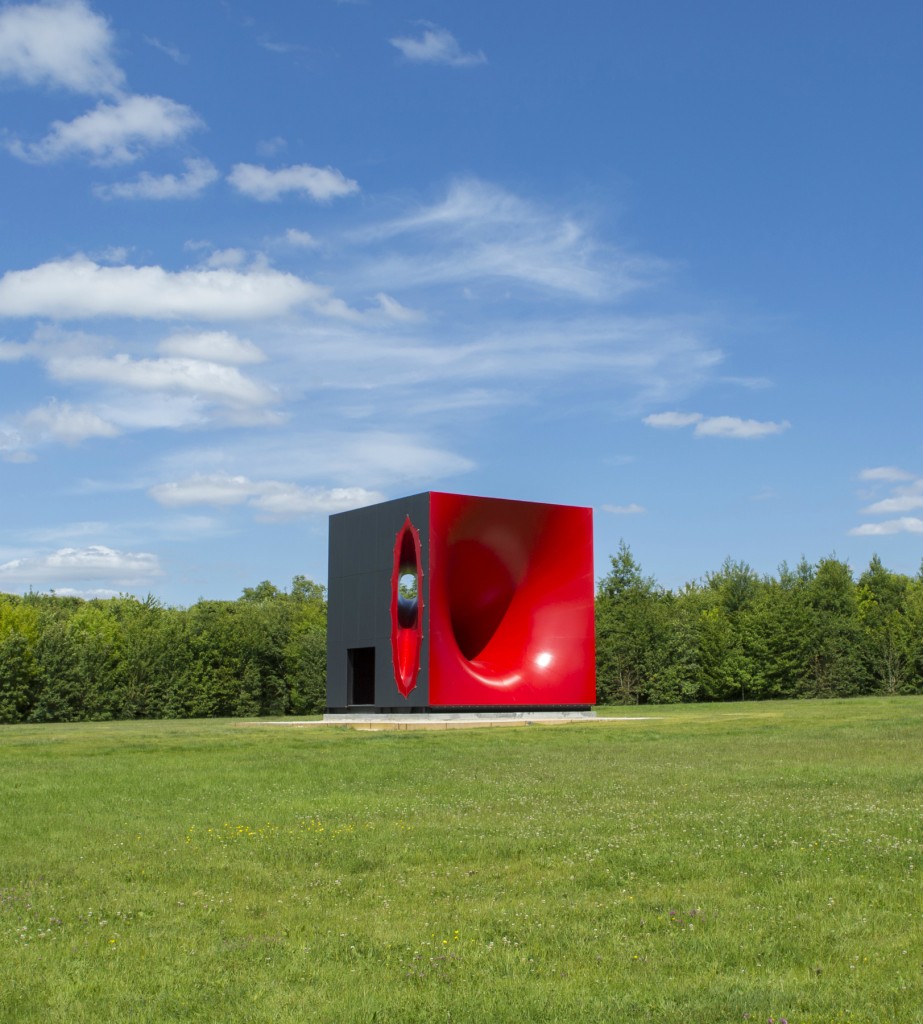 Arriving on the Château steps is the fun play with mirror,s C-Curve, and in front of the Parterre d’Eau, Sky Mirror, “completing the infinity of astral light, in the presence of the now”. So far so good, nothing controversial here.

This small grey-haired genius is turned on by gargantuan projects but what will the visitor to Versailles make of Dirty Corner? Described by the artist as “the vagina of the Queen who took power?” Which Queen? Nobody is sure, not even Kapoor! A steel V-shaped tunnel is poised on Le Nôtre’s clipped green grass, facing the castle, surrounded by a pile of dirty pebbles, concrete and earth. The sculpture alone used 500 tons of stone from Belgium and 1,000 tons of soil from agricultural production; each giant stone weighs 25 tons. It took cranes and heavy-duty machinery to install them, some elements of the sculpture were painted on the spot. The surrounding statues look on: puzzled? 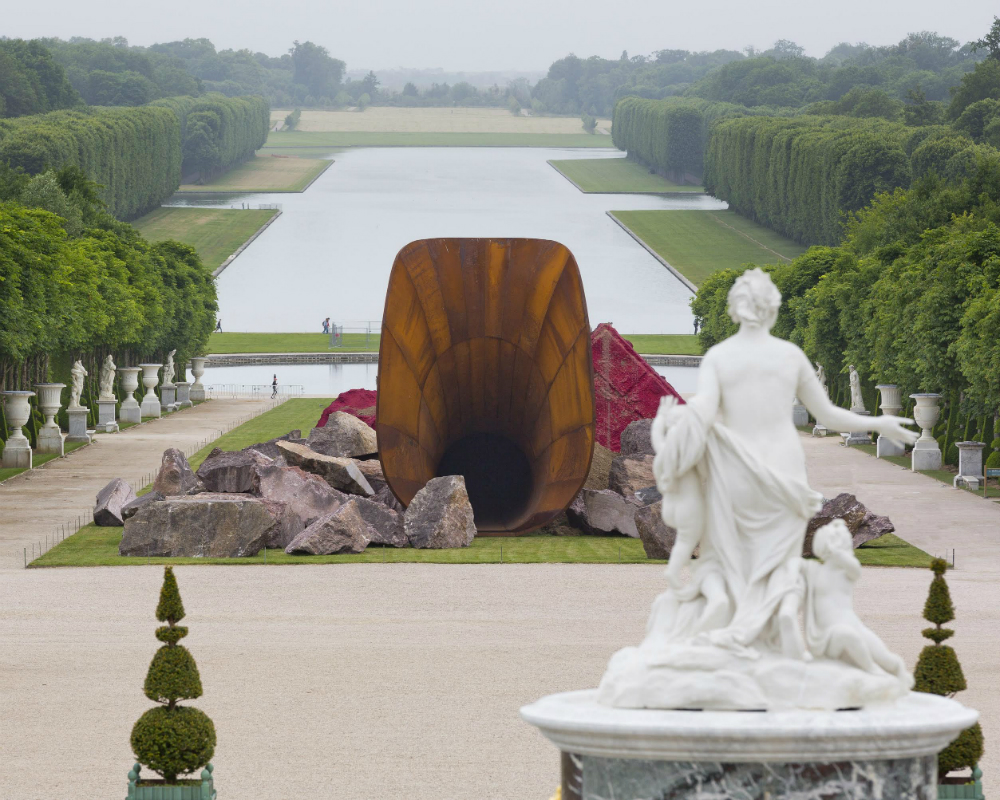 Further on the vortex of Descension is a dramatic 9- square meter noisy whirlpool, which required very deep excavation. “It goes to the centre of the earth, a dark spinning pit, a female object, if anyone tells you otherwise, they’re wrong”, insists Kapoor. And, in the Bosquet de L’Etoile (Star Grove), the massive red sculpture, Sectional Body Preparing for Monadic Singularity, “pushes the unresolved, the untidy, and emerges out of the imposed order of Le Nôtre’s grand scheme for the garden”, explains Kapoor. A few deck chairs to relax and enjoy the sculpture would be a great idea!

Opposite the Château, in the Salle du Jeu de Paume (Royal Tennis Court) is Shooting the Corner. “This is the place where liberté, égalité, fraternité, originated”, thinks Kapoor who has installed a canon where color is ejected violently everywhere, shooting 5-kilo balls of wax against a wall– evoking boiled bodies in a triangular corner of the room, “reminiscent of Jackson Pollock, it could be blood”, suggests Kapoor.

“The Anish Kapoor project is, by far, the most complex we have worked on,” says Catherine Pégard. No kidding! 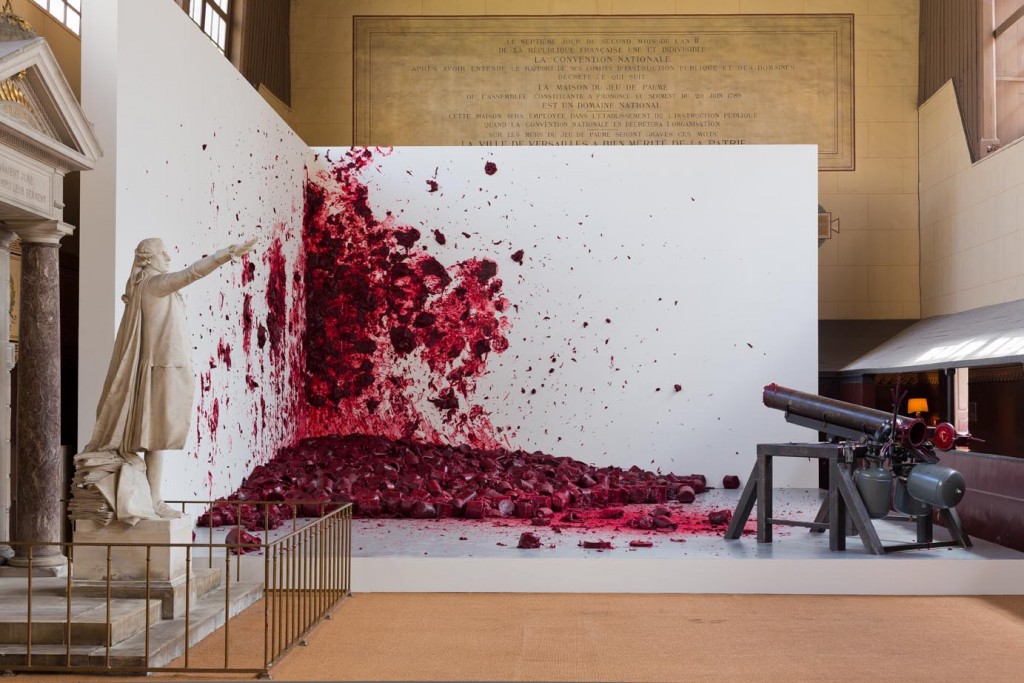 In Paris they still talk of Kapoor’s Leviathan, a giant inflated “cathedral”, which in 2011, invaded the nave of the Grand Palais and attracted 300,000 visitors. Undoubtedly, one of the most remarkable artists of his generation, and one of the most loved and respected but, has he gone too far this time with his frequent references to sexuality and vaginas? Whatever, he says, “it’s all about the dialogue and it’s courageous of Versailles to let me exhibit here”. 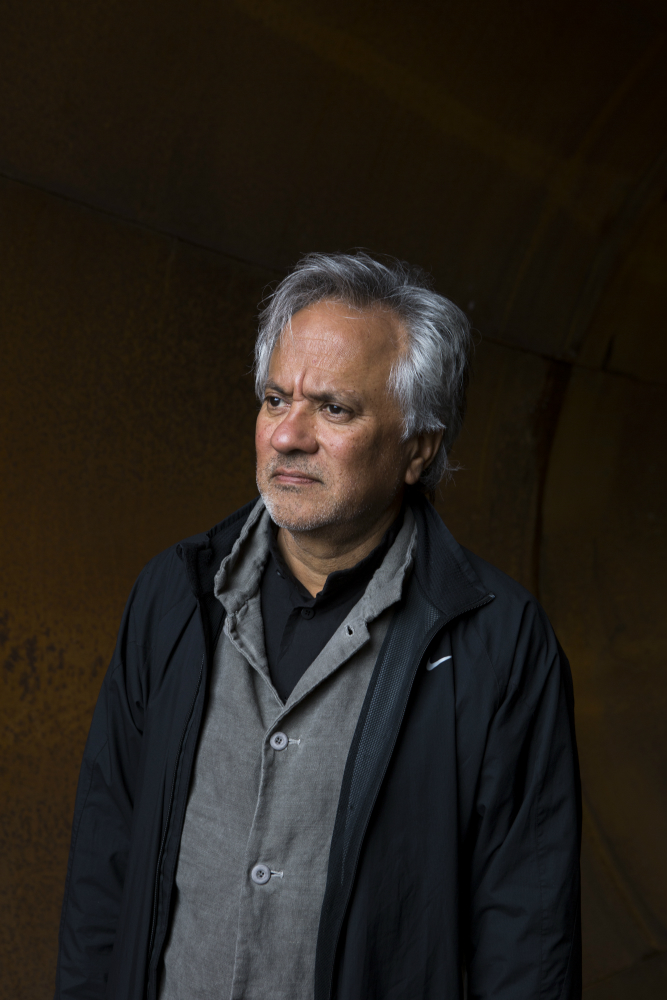