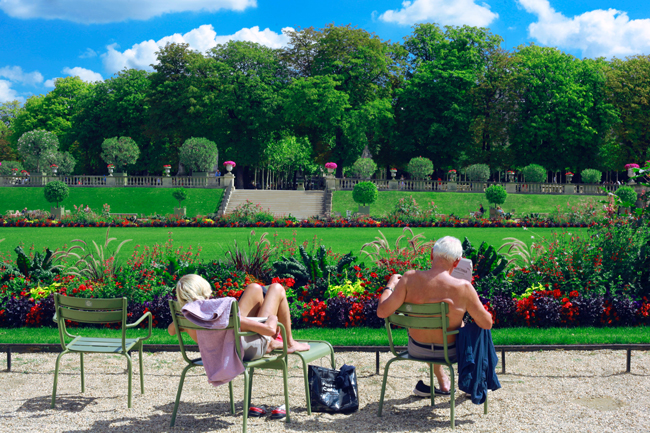 An unprecedented canicule (heat wave) arrived in Paris this past week with sky-high temperatures reaching 40C (104F), driving people to air-conditioned shops, cinemas, and grocery stores. Some took refuge at Paris Plages, the annual “beach” set up on the banks of the Seine and Bassin de la Villette. Check out the video below showing the swimming pools that have been set up in the Bassin de la Villette in the 19th arrondissement. Meanwhile forest fires are raging across Europe— including southwest France- with more than a thousand firefighters in the Gironde region fighting to control forest blazes. Hundreds have been evacuated from their homes.

ICYMI: Parisians beat the heat as ‘Paris Plages’, an annual installation of pools filled with water from the Bassin de la Villette artificial lake, opened up for public pic.twitter.com/qn7pohTIXY

Have you heard about France’s great Dijon mustard crisis? There’s a shortage of the favorite condiment, the market shelves empty of the beloved jars, and people are worried. The problem stems from climate change, the war in Ukraine, and Covid supply problems. Most mustard seeds are cultivated in Canada, and a heat wave over Alberta and Saskatchewan has decimated production. A recent (fascinating) article in the New York Times delves into the issue. To quote Roger Cohen: “Mustard runs deep in French culture. “My blood is boiling” is rendered in French by the expression “la moutarde me monte au nez,” or “the mustard is rising into my nose” — and as Bastille Day testifies, when that happens in France, the effect can be devastating.”

The weakened euro means that American tourists are taking advantage of les soldes (semi-annual sales) in a big way. The dollar has reached parity with the euro for the first time in decades, making for steep discounts for lucky travelers. Cheaper prices, coupled with the tax-free shopping (VAT refunds), makes it easy to splurge on designer goods, not to mention hotel rooms.

Last week’s Bastille Day festivities weren’t just about the spectacular fireworks display over the Eiffel Tower. A highlight is always the Patrouille de France’s fighter jet squadron painting the blue, white and red colors of the French flag in the sky. And this year, in a first for a president, Emmanuel Macron flew with the Patrouille de France on a practice run. Check out his video above. The traditional military parade on the Champs-Élysées paid homage to Ukraine and eastern European allies. As reported by France24, “Macron’s increased military commitment to eastern Europe is happening at the same time as a France reduces troops in Africa’s Sahel region. Paris will keep no more than 2,300 troops there by the end of the summer, down from more than 5,000 a year ago. In the light of the Ukraine conflict and inflationary pressures, Macron has announced an increased defense budget for the coming years “to match the means to the threats.”

France held ceremonies this past Sunday to commemorate the 80th anniversary of a mass roundup of Jews in Paris under the Nazi occupation. As reported by the Associated Press, Macron “vigorously vow[ed] to stamp out Holocaust denial as he paid homage Sunday to thousands of French children sent to death camps 80 years ago” during the notorious Vel d’Hiv police roundup. Over the course of two days on July 16-17, 1942, police forced 13,152 people — including 4,115 children — into the Winter Velodrome of Paris, aka the Vel d’Hiv. Macron denounced former French leaders for their roles in the raids. “We will continue to teach against ignorance. We will continue to cry out against indifference… And we will fight, I promise you, at every dawn, because France’s story is written by a combat of resistance and justice that will never be extinguished.”

Last but not least: The Guardian recently highlighted a wonderful social experiment happening in the 14th arrondissement called the “Republic of Super Neighbors.” To quote journalist Peter Yeung: “It was a distinctly un-Parisian revolution although it began on an inner city street. No barricades were assembled to block the nearby boulevards and no radical students hurled cobblestones ripped from the pavement. Not a single monarch had their head chopped off. Instead, a 215-meter-long banquet table, lined with 648 chairs and laden with a home cooked produce, was set up along the Rue de l’Aude and those in attendance were urged to openly utter the most subversive of words: bonjour.”

Get Your Purchases Tax-Free in France!