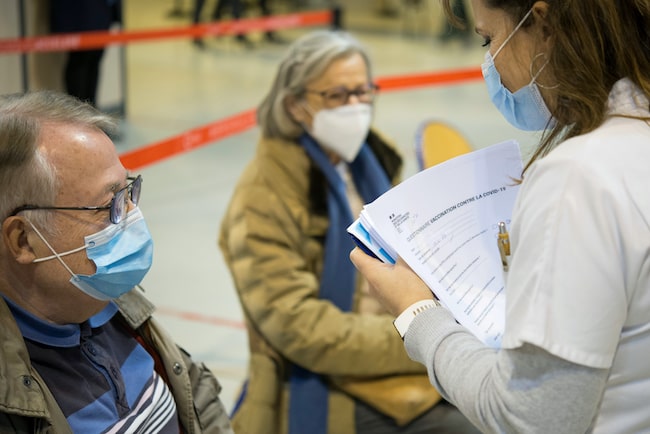 Dreaming of visiting France this summer? That rêve may soon be a reality for vaccinated travelers. In an exclusive, much buzzed-about interview on the CBS News show “Face the Nation,” President Emmanuel Macron announced he’s finalizing plans to allow vaccinated Europeans and Americans to visit France this summer. “We’re vaccinating more and more people,” the president explained, “with mid-May as the objective for 20 million, 30 million by mid-June, and by the end of the summer, all adults will be offered a vaccine.”

Starting in May, France will progressively lift restrictions, easing the third lockdown that went into effect before the Easter holiday weekend. Currently all schools and non-essential businesses are closed, and a nationwide curfew keeps citizens indoors from 7 pm to 6 am.

Though Americans have not been allowed to enter the European Union for nonessential reasons since March 2020, there’s now a light at the end of the tunnel. Macron explained that the government is working on a plan to welcome inoculated European and American citizens. He said, “we are working hard to propose a very concrete solution, especially for U.S. citizens who are vaccinated, so with a special pass, I would say.”

Even as President Macron expressed optimism in the interview, France was imposing tough new entry restrictions on travelers from countries where the pandemic is raging (Argentina, Chile, South Africa and Brazil), in order to stop the spread of contagious new variants.

Meanwhile, the French health ministry on Monday said that 5,970 people were in intensive care units with COVID-19,” reports Reuters, “up from 5,893 a day earlier, a sign that the hospital system remains under pressure.”

The French government is also addressing the mental health challenges brought on by the pandemic, announcing a program of prepaid psychological sessions for children affected by the COVID crisis. (With a prescription, kids are offered 10 appointments with a psychologist.)

Speaking of travel, vaccinated Americans keen to snap up airline tickets before the prices soar will be pleased to know that Air France will be launching a new nonstop flight from Paris CDG to Denver starting in July. As reported by CBS Denver, these “will be the first flights ever in or out of DIA for Air France, although the service’s launch is “contingent on changes to travel bans currently in effect…”

And if you’re looking to discover some new French music, consider Eddy de Pretto’s recently released second album, “À Tous Les Bâtards” (“To All the Bastards”). The New York Times describes him as “the proud sound of a new France,” his albums drawing “as much from ’60s chanson as contemporary hip-hop.” Pssst. He used to croon on the sightseeing cruises on the Seine!

Oh and have you heard about how Facebook pulled the page for Bitche, France? As recounted in an article in The Verge: “A city in France has had a real rollercoaster of a week, after its Facebook page was accidentally deleted for violating the terms and conditions of the site. Of course, the city of Bitche, France (in the Moselle department in northeastern France) hadn’t done anything in particular to violate any of Facebook’s rules — it just sounded a whole lot like it did.” Obviously confused over “profanity” and its own censorship policy, Facebook has since restored the city’s page. Read the full article here.

As we look ahead to a Parisian summer (hopefully) full of tourists, we’ll share a lovely look at one of the city’s most beloved landmarks. Last week we remembered the tragic day, two years ago, when Notre-Dame de Paris went up in flames. The reconstruction has been a Herculean effort. A superb video takes us behind the scenes of the project, with stunning images showing off the artisans’ work. Check it out below.

Previous Article A Walk of Discovery in Parc Saint Cloud, 10km from Paris
Next Article The Wonders of the Basilique Saint-Denis