You Wear What You Are: Palais Galliera Launches a New Fashion Exhibition 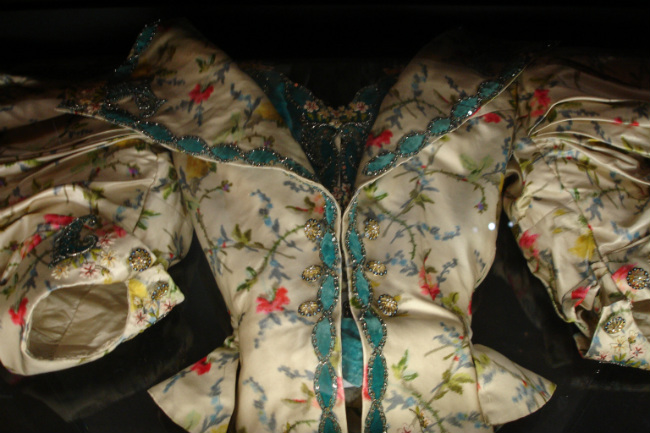 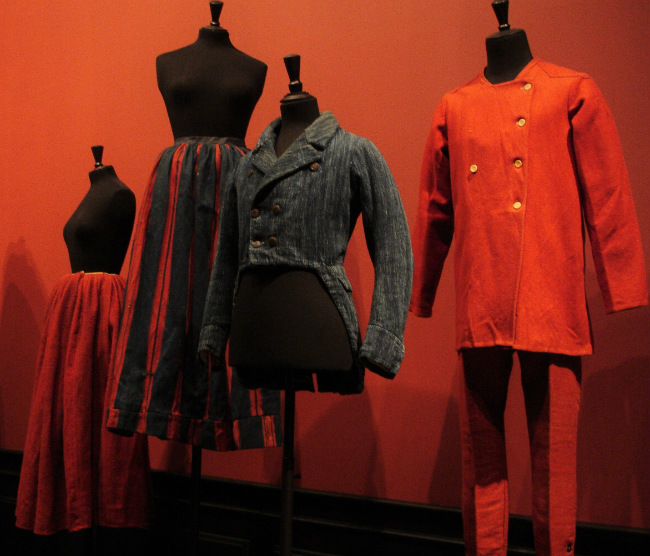 It is often said that you are what you wear – that your clothes tell the world heaps about your social status, confidence, and state of mind. And you probably get treated accordingly. But the just launched exhibition, Anatomie d’une Collection, which runs through October 23 at Paris’s fashion museum, Palais Galliera, and which explores the question, Who wears what?, could just as appropriately have been called “You Wear What You Are.” For it is no more likely that the plain red wool twill uniform on display worn by an anonymous convict would have been worn by, say, Napoleon I, than that the convict would have worn Napoleon’s black silk velvet jacket embroidered in silver, also on display. 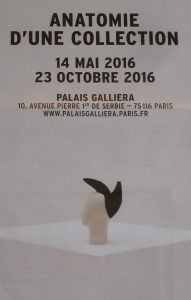 Poster for exhibition / by Diane Stamm

The exhibition – a hundred articles of clothing and accessories from the 18th century to today, worn by both the famous and the anonymous – are displayed along five themes – Relics of the Past, Stage Actresses and Female Personalities, Charismatic Clients and the Totally Anonymous, Closest to the Couturier, and Fashion Prototypes or Real Clothes. They tell the world about the wearer’s social status, the way they lived, and the way they were probably treated.

The opening section, Relics of the Past, reflects on the unique aspect of clothes in absorbing the essence of the person to whom they belonged. Anyone who has ever thrust their face into a well-worn article of clothing worn by a deceased loved one to try to recapture their essence, if just for a moment, will understand this. And it is due, of course, to the proximity of the item to the wearer. It is this aspect that turns clothing into “relics.” Indeed, in Catholic theology, an object that has touched the body of a saint is recognized as a “real relic” or “contact relic.” 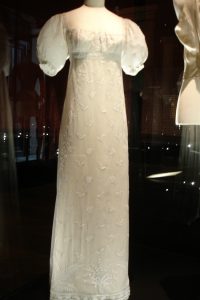 Among the articles of clothing in the Relics section is a corset worn by Queen Marie-Antoinette around 1785. It was kept by Madame Éloffe, the Queen’s milliner and marchande de modes – a fashion designer who specialized in decorating clothes with lace, artificial flowers, and other whimsical flourishes. There is also a dress worn by Empress Josephine, wife of Napoleon I. It is made of white cotton muslin, a fabric forbidden by Napoleon because it was imported from India by England, France’s enemy. Josephine often flouted her husband’s decrees.

Also included are two dresses worn by Blanche Castets, wife of Dr. Paul Gachet, who treated Van Gogh near the end of his life and whose portrait Van Gogh famously painted. The dresses, made with yards of fabric, are nearly identical, except for the color. One, her wedding dress, is of ivory silk faille; the other, in grey violet silk faille, is her robe de lendemain de noce – her “day-after wedding dress.” In the 19th century, brides would wear such a dress on their obligatory visits to friends and family in the two weeks after their wedding. In the same display is a silk taffeta dress decorated with a wheat and cornflower motif worn in the 1850s by the French novelist and memoirist, Amantine-Lucile-Aurore Dupin, whose nom de plume was George Sand. 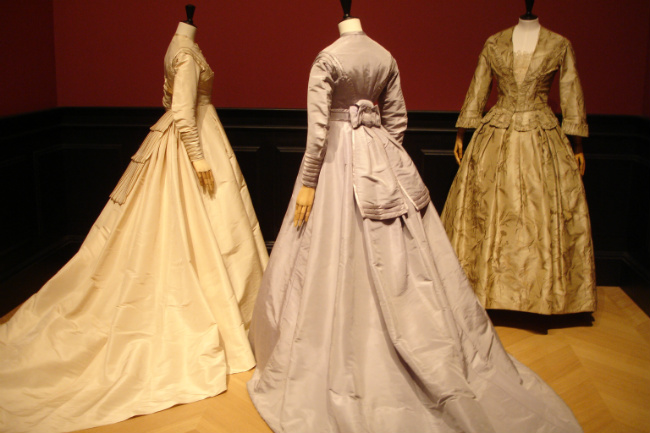 The first haute couture house in Paris was established in 1858 by English couturier Charles Frederick Worth. He coined the term “fashion designer” and created luxury fashion for upper-class women. The term “haute couture” was first used in 1908. The Stage Actresses and Trendsetters section presents garments made by haute couturiers especially for stage, theatre, and opera performers, whose clothing both on and off stage was closely chronicled in the press. They became walking advertisements for the couturiers, and trendsetters. 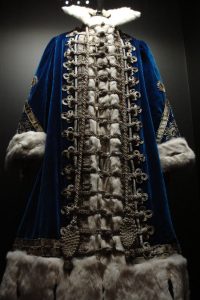 Items on display in this section include a floor-length coat worn onstage by Opéra-Comique singer Marthe Davelli in the early 20th century. Made of royal blue silk velour trimmed in rabbit fur made to imitate ermine, and miles of metallic silver braid trimming, it is sumptuous. And there is a blouse that is the very embodiment of femininity worn by Belle-Époque dancer Cléo de Mérode. Made of floral-decorated fabric and richly trimmed with blue fabric insets and metallic thread, its leg-of-mutton sleeves and tight bodice emphasize the dancer’s famous eighteen-inch waist.

The Charismatic Clients and the Totally Anonymous section does include several items of clothing worn by laborers, but by far the more interesting pieces are the dresses and accessories worn by such people as Audrey Hepburn; Catherine Deneuve; the Duchess of Windsor; and Daisy Fellowes, fashion icon, Paris editor of Harper’s Bazaar, and daughter of Isabelle-Blanche Singer, heiress to the sewing-machine fortune. 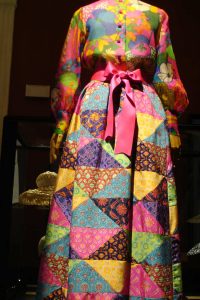 One spirit-lifting ensemble, created by Yves Saint Laurent for the Duchess of Windsor, is composed of a vibrant floral print blouse, multicolor patchwork silk organza skirt, and wide hot pink satin belt bowed at the waist. It absolutely screams 1969. But in a good way.

Among the many other items in this section is a collection of hats worn by Princess Murat, great-granddaughter of Marshal Ney, a French soldier and military commander during the French Revolutionary Wars and the Napoleonic Wars, and wife of the great-great-grandson of Joachim Murat, Marshal of France. The princess was an accomplished equestrian and hunter, but she was near-sighted, so she had a monocle sewn into each of her hats level with her left eye. 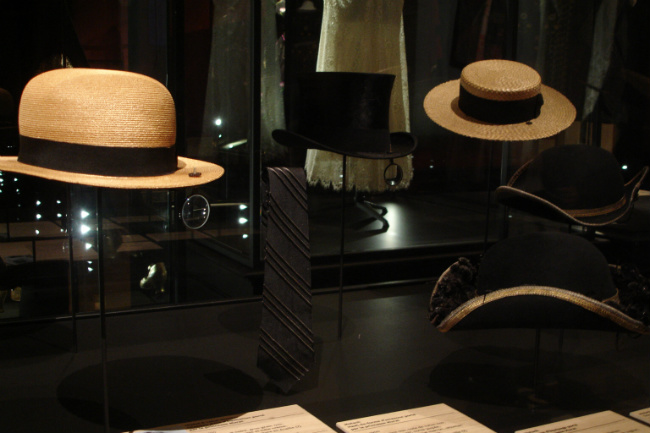 Hats with monocle worn by Princess Murat / by Diane Stamm

Closest to the Couturier explores the role of wives and other muses in the creation of haute couture. Often fashion was inspired by and designed for their particular bodies. Such was Dauphine de Jerphanion, who became the exclusive model for designer Thierry Mugler. 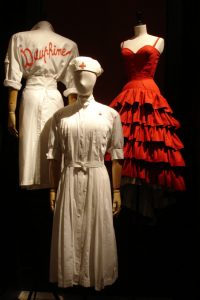 How often have you heard people ask about runway clothes: But who would ever wear that? The answer, provided in the narrative accompanying Fashion Prototypes or Real Clothes, is this: No one. As is explained, most runway cloths are prototypes – the physical expression of an idea or fantasy. They are not meant to be worn in the real world.

And perhaps you have looked at the faces of runway models and wondered what it was about that face, which seems so unexceptional except perhaps for its moroseness or scowl, that the designer thought merited a walk down the runway. The narrative answers that question, as well, and it is this: What is important on the runway is not the face. It is how the clothes hang on the model’s body. It is how the body supports the clothes that matters.

Among the pieces displayed in the Fashion Prototypes or Real Clothes section is Jean-Paul Gaultier’s iconic 1984 orange velvet cone dress, and dresses designed by Jean-Charles de Castelbajac and Comme des Garçons. Some are dramatic, and some are intriguing, but none pops like Gaultier’s paradigm-smashing creation. In the real clothes area, included is a pajama suit Tilda Swinton wore at Cannes. 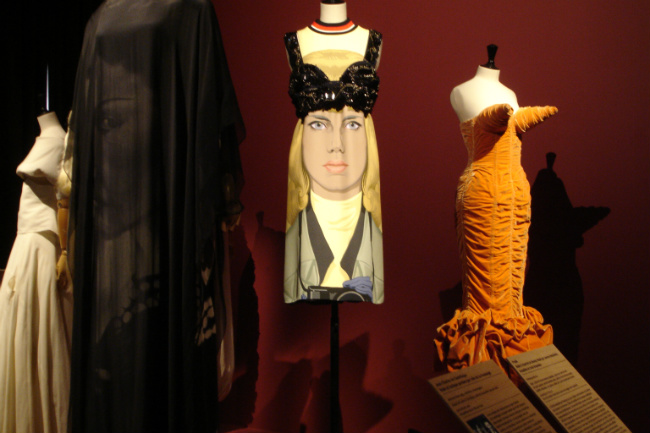 This exhibition is accompanied by a catalogue, in French, available for 39.90 euros, that contains excellent essays. For example, the essay “Fashion Museums, the Absence of the Body,” by Laurent Cotta, reflects on why we buy clothes, their meaning, their ability to evoke memories, their assumption of the status of a memento mori, and their “evidence of the ephemeral nature of a fashion that has ended up as a symbol of passing time.” 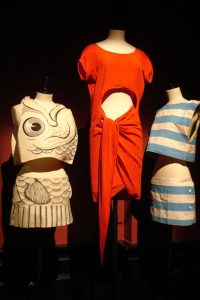 Concept clothes on display at the exhibition / by Diane Stamm

Alexandra Bosc’s essay, “Clothes as Contact Relics,” considers how clothes become imbued with a person’s essence, and she delves into the sentimentality of clothes. For example, Napoleon’s stepdaughter lovingly preserved his “’little hat’ – basically, nothing but common-or-garden ‘old clothes.’” The Comtesse de Castiglione in her will designated that she wanted to be buried in the “Compiègne 1857 shirt, cambric and lace,” a souvenir of her love affair with Napoleon III. And Flaubert wrote that he preserved the “large, multi-coloured shawl” his recently deceased sister had worn.

Clearly, clothes can be so much more than just the fabric of which they are made.

Some of the fabrics, especially those from the 18th century, are elaborately and exquisitely embellished with multicolored flowers and other designs. They are delicious. Included in the exhibition are a variety of shoes, including a pair of French actor and singer Mistinguett’s T-bar shoes; a pair of violet nubuck gloves embellished with gold thread made for Pope Pius XI; and a wide selection of hats, including Gala Dali’s iconic shoe-hat that appears on the exhibition poster. While the vast majority of the Palais Galliera’s holdings were actually worn by their owners, since the 1970s, several fashion houses have been donating their prototypes to the museum. 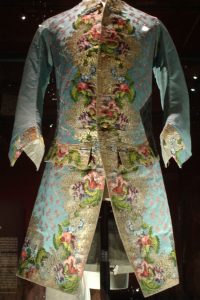 The Palais Galliera has planned a number of educational and fun activities for visitors of all ages. There are workshops that give participants the opportunity to decorate fans (there are a couple of them in the exhibition), to create clothing and jewelry, and to be a “fashion journalist” and write an article about a garment or accessory. There are also guided tours. There are sign language tours for the hearing-impaired, “image describers” for the visually impaired, and workshops for people with mental handicaps. There are also exhibition visits for people with little access to cultural events.

For those who love fashion, history, and clothes, this exhibition will not disappoint.