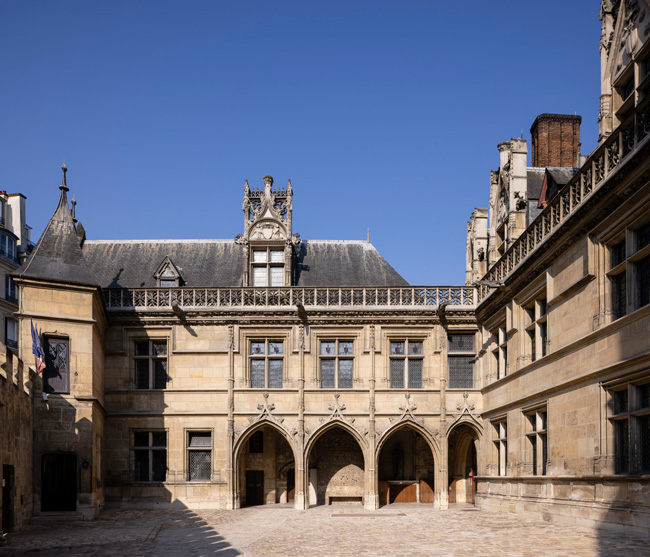 Have you heard the news? One of our favorite Paris museums, the Musée de Cluny in the Latin Quarter, has recently unveiled the fruits of an ambitious restoration and modernization project that took seven years. This is the only national museum dedicated to the Middle Ages in France, and it’s chock full of priceless medieval art. It’s also one of the oldest museums in Paris— in existence for nearly two centuries. Here are five reasons to book your tickets tout de suite.

Inside a 15th-century private mansion, the museum occupies extraordinary real estate in the Latin Quarter. The lower level houses ancient Roman thermal baths, and there’s even a Gothic chapel on site. Tip: If you need a caffeine fix before or after your visit, the Institut Finlandais (Finnish Cultural Institute) facing the museum offers delicious coffee, traditional cinnamon rolls and other baked goods at the design-centric Café Maa.

Fans of the museum recall its previous incarnation: it was dark and cramped and hard to maneuver. The renovation has added a new contemporary extension, while restoring the centuries-old building: windows that had been sealed shut now see the light again. Most importantly, the museum is now wheelchair accessible.

The new visitor circuit follows a chronological order through 21 rooms. Entirely restored, a selection of 1600 works from the collection shows off the glories of medieval art and its evolution and diversity across northern and southern Europe. From paintings to gold objects, architectural elements to tokens from everyday life, it’s a fascinating immersion in the Moyen Âge. Today the prestigious collection include a mind-boggling 24,000 works, and it continues to grow each year; for example, in 2021 the museum acquired 10 new works.

The Lady and the Unicorn

The star of the Cluny is not one but six tapestries known as “The Lady and the Unicorn.” This series is considered one of the great masterpieces of Western art. To quote the museum’s official website: “Touch, taste, smell, hearing and sight… These six tapestries, woven in around 1500, represent the five senses against a detailed red background. The remaining sixth sense, explained only by the inscription “À mon seul désir” (To my only desire), has inspired countless theories. Without excluding a possible meaning in the register of courtly love, it could be a reference to free will: the woman with her decorative headdress and refined clothing, renouncing temporal pleasures.”

The museum gift shop has long been a destination for locals looking to pick up unique cadeaux (you can stop by and browse without buying a museum ticket), and now there’s another spot sure to delight: a museum café to enjoy lunch or a snack break in medieval surroundings. And when the weather’s nice, tables are set up in the atmospheric courtyard.

More in medieval art, Musée de Cluny, Museum of the Middle Ages, The Lady and the Unicorn