Must-See Mucha Exhibit at the Musée du Luxembourg in Paris

Czech artist Alphonse Mucha moved to Paris in 1888, but it was a matter of being in the right place at the right time in 1894 that would change his life. The great French stage actor Sarah Bernhardt wanted a new poster for her hit play Gismonda. On the night of 26 December, St. Stephen’s Day, she made a call to her publisher Lemercier and asked for a new poster to be created and ready by 1 January. Mucha happened to be in the office that day and was familiar with the actor, as he had illustrated her when she performed as Cleopatra. He created a poster that was more than life size, towering to over 6.5 feet tall, in muted pastel colors and depicting her as a Byzantine noblewoman, with a headdress of orchids and an arch halo behind her to highlight her face. The curves and use of flowers was reminiscent of the Art Nouveau movement taking root at the time– and is what Mucha will be remembered for to this day. The poster was so popular it was being cut down and stolen at night; Bernhardt was so impressed she signed him to a five-year exclusive contract.

Mucha would go on to produce posters for her plays depicting Bernhardt as Hamlet, Lorenzo de Medici and her staring roll in Alexandre Dumas’ La Dame aux Camelias, among many others– all in the Art Nouveau theme. Their continued partnership would make him just as famous as the greatest French stage actress of the time.

With his newfound fame, Mucha began creating a series of decorative panels focusing on the heavy themes of Art Nouveau, his two or four panels always focused on one central image of a woman: The Arts in 1898, depicting Dance, Painting, Poetry and Music; The Flowers in 1898, Rose, Carnation, Iris and Lily; The Times of the Day in 1899, Morning Awakening, Brightness of the Day, Evening Contemplation and Night’s Rest; The Precious Stones in 1900, Topaz, Ruby, Amethyst and Emerald. And the amazing collection of The Seasons created in 1896; Spring with her innocence and blossoms, sultry Summer dangling her feet in the water, Autumn surrounded by the grapes of harvest and frosty Winter hiding behind the snow covered branches. 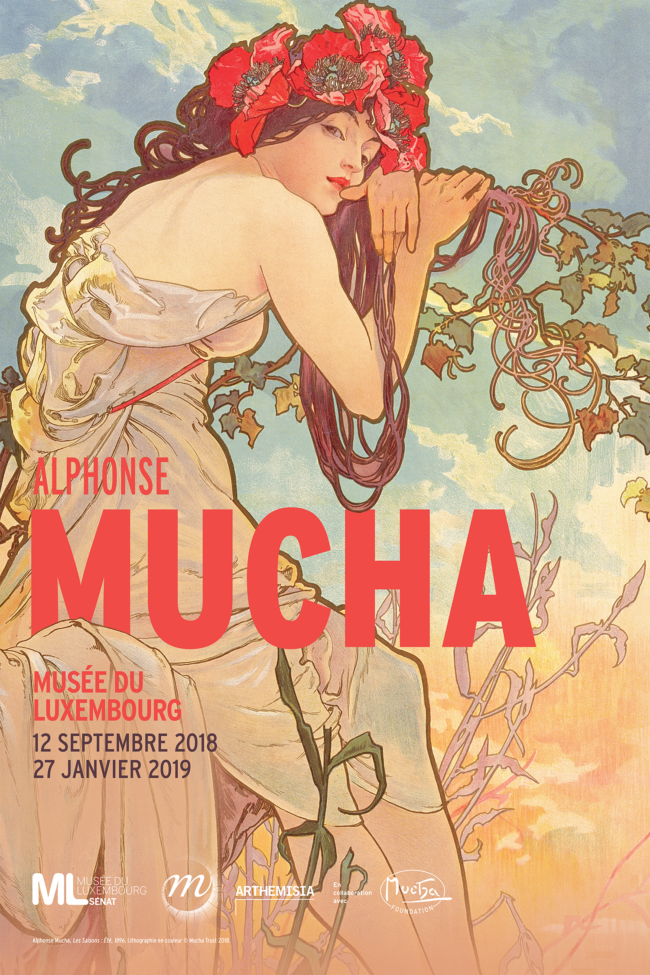 In 1896 he began creating posters for commercial purposes for well-known brands such as Job cigarette papers, Savon Notre Dame, Champagne Ruinart, and Moet et Chandon. His partnership with Moet et Chandon would result in many pieces ranging from menus to postcards.

Mucha’s use of jewelry in his posters caught the eye of the son of the French jeweler Alphonse Fouquet. Georges Fouquet was looking to make his mark under the shadow of his father. Fouquet and Mucha collaborated for the 1900 Paris International Exhibition with pieces inspired by his art. The decorated chain with pendants made with pearls, semi-precious stones, gold, enamel and mother-of-pearl are heavily influenced by his Moet et Chandon Grand Crémant Imperial poster. Through their partnership, Mucha was asked to design Fouquet’s new boutique, both the interior and exterior. His goal was to create a space that was just as much a piece of art as the pieces Fouquet was selling. In 1923, Fouquet remodeled his store, but he had Mucha’s monumental works carefully removed and stored in a warehouse, until the 1980s when it was installed in the museum of Paris, the Musée Carnavalet. (Currently closed for renovation and set to open in late 2019, beginning of 2020).

In 1910 Mucha returned to his homeland with the intention of expressing the ideals of his fellow Czech people. A new theme emerged: one of iconography, folklore and even at times political. Under the Austro-Hungarian Empire, the Czechs were forbidden to organize and had to come up with other outlets to get out their message. Sokol is the Czech word for falcon, and used as the emblem to hold national sporting events for gymnastics. In truth, it was to unite the youth of the country. The 6th Sokol Festival poster is heavy with symbols, the red cloak being a Sokol color and epitome of Prague, her staff holds the emblem of Prague and her crown the ramparts. In 1925 the 8th Sokol Festival poster– created after the republic of Czechoslovakia was formed– depicts celebration and exudes an outright national pride. Mucha would die in 1939 in Prague, having never returned to Paris.

The Mucha exhibit at the Musée du Luxembourg is amazing, and there is much more than I even mentioned here. It’s running until 27 January, 2019 and open every day of the week from 10:30am – 7pm. Make sure to grab your tickets online before you go to beat the line. Since it’s a smaller museum, the staff controls closely how many people are in at one time, which makes it nice for you as a museum-goer. You can also download the audioguide before you go, which I highly recommend and it’s only a few dollars on Apple or Google play, less expensive than the audio guide and exactly the same– available in French, English, Spanish and Dutch.