Home Museums Love in the Louvre

When you walk inside the Musée du Louvre you can’t miss the many paintings and statues dedicated to love. Just the art depicting Venus could fill a small museum on their own. However, it is her rival that captivates those who stroll through the Louvre: Psyche, a young mortal girl born of great beauty and praised by many that had turned away their attention from the goddess of love and beauty. Venus was deeply offended and sent her son Cupid to seek revenge. He was to shoot her with one of his arrows so she would fall madly in love with a hideous creature and her devotees would turn on her. Cupid instead scratched himself with the his own dart accidentally, and when he laid his eyes on the beautiful Psyche, he couldn’t help but fall deeply in love with the stunning girl.

François Gérard’s painting Cupid and Psyche was exhibited in the Salon of 1798. The French artist that studied under Jacques-Louis David was known more for his portraits of Emperor Napoleon and his family and was even later named a Baron by the Emperor. In 1797 he painted Psyche et l’Amour in all its Neoclassical goodness, depicting the first moment that Psyche and Cupid meet. He gently places his hand on her shoulder and gives her a tender kiss on the forehead. Psyche can be seen sitting within the landscape while draped with transparent fabric over her legs, leaving her breasts bare. Above her head flies a butterfly that symbolizes the incarnation of the soul of which she will later become the goddess. The painting has an ethereal feel as we look into the tender, poetic and sensual moment as the love blooms between the two. This painting can be found in the Sully wing on the 2nd floor in the Salle la peinture d’histoire à la fin du 18e siècle, room 934.

Another Neoclassical French artist that studied under David was François-Edouard Picot who would also depict the two lovers in L’Amour et Psyche, or “Psyche abandoned by Cupid.” The scene is set within a room that’s background is filled with ionic columns and in the foreground, a bed draped in red fabric. Psyche is seen still peacefully asleep as Cupid rises from the bed and looks back at her. The sheets draped over her legs, much like in the previous painting while her arm is outstretched in the empty place he just was. As he rises and reaches for his bag of arrows, she is left in a dreamland state while his glance is one of goodbye. Is it telling us that love is fleeting even in the mythical world, or maybe he just is running out for some croissants? The painting can be found in the Denon wing on the 1st floor in the Salle Daru, room 702.

Antonio Canova’s statue, Psyché ranimée par le baiser de l’Amour created in 1777, is one of those breathtaking pieces that further elaborates on the tale of the two lovers. It tells the story of when the young Psyche falls under the power of Cupid’s mother Venus and is given four tasks. The final task was to bring back a vial from the underworld that would return Venus to her younger more vibrant self. After retrieving the vial, curiosity got the best of Psyche and she opened and breathed in the fumes and fell into a deep sleep. Cupid found her and rushed to her side, took her into his arms and revived her with a kiss. Based on the Metamorphoses of Apuleius, the story ends with the marriage of Cupid and Psyche, as she became the goddess of the Soul. With elaborate details, this sculpture is amazing up close; be sure to move all around it. From the vial to Cupid’s sack of arrows, this sculpture depicts what love should be. It’s located in the Denon wing 0 level, in the Galerie Michel-Ange, Room 403.

A painting that is sure to always catch the visitor’s eye is the presumed portrait of Gabrielle d’Estrées and her sister the Duchess of Villars. There is still a lot that is unknown of this painting, including that of the subject and the artist. Attributed to the Fontainebleau School in 1594, it is believed to be Gabrielle d’Estrées, the favorite mistress of King Henri IV. Her sister, the Duchess of Villars, is holding her nipple between her fingers, which was a gesture symbolizing pregnancy. Gabrielle would have been pregnant with the future Duke of Vendome, Henri IV’s illegitimate son, that was to arrive any day. In Gabrielle’s left hand, she holds a ring between her fingers, which is thought to be the coronation ring of Henri– a token of his love and loyalty. In the background sits a woman sewing, could it be baby clothes? Henri IV was deeply in love with Gabrielle, even though he was married to Margaret de Valois. They did not hide their affection for each other and she would travel with him on his many campaigns. In March 1599, he visited Pope Clement VIII to ask for an annulment so he could remarry, and promised Gabrielle they would be together by giving her his coronation ring. By April, pregnant with his child, she suffered eclampsia and before he could reach her, she died. The king was hard to console at her loss and gave her a funeral set for a queen at the Saint-Germain-l’Auxerrois Church next to the Louvre. You can find this painting by following the snickering adults in the Richelieu wing on the 2nd floor in the salle Seconde École de Fontainebleau, room 824.

The great French composer Claude Debussy would spend many hours strolling through the Louvre and would always find his way to a painting by Jean-Antoine Watteau. The Voyage to Cythera was painted in 1717 and depicts a fête galante, a celebration by the royals of France following the death of the Sun King. Cupids are fluttering above while a statue of Venus peers down on the gathering aristocrats. Couples are embarrassed below the watchful eye of the goddess of love while others are venturing down the hill to board the boat to Cythera, the Greek island that was said to be the birthplace of Venus. Debussy was so inspired by the painting that he wrote “L’Isle Joyeuse” in 1904. Play the song while looking at the painting and you can hear exactly where his inspiration came from. After this experience, it will be hard to look or listen to either one separately again; they are truly made for each other. Venture into the Sully wing, 2nd floor, in the room dedicated to Watteau, salle 917.

Countless other statues and paintings tell the tale of love within the walls of the Louvre. Many are in the eye of the beholder, and taking the time to find them is the best part. The Louvre holds more than 35,000 works of art in 403 rooms, a daunting task to see it all, but while some people may tell you to skip it, the Louvre is a must for any art lover. If you are going and have a special theme or painting you want to see, reach out and I would be happy to guide you to the best route and time to visit. 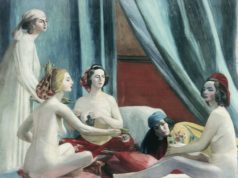 The Marvelous Madame Marval: A Woman Artist Among the Fauves

You can Row Inside the Palais de Tokyo in Paris. For...