Home Museums Lost in Paris, I Found the Musée Rodin

As anyone who has ever visited Paris knows, it is a walking city.  Even the monumentality of its arrondisements does not overshadow its human scale and accessibility for pedestrians.  Keeping in mind that every building of any note is usually within walking distance of the Seine, I decided to forgo a map and wander, à la flâneur, the elegant curve of the streets of the river’s Left Bank, Quartier Latin, one mild June morning.

My hotel was off the rue de la Harpe, just around the corner from place St. Michel, surrounded by bustling cafés and restaurants.  I crossed the boulevard St. Michel, known to Parisians as the “boul Mich” and followed what appeared to be a bipedal cello, then tucked myself into the narrow slice of rue Ste. André des Arts, a winding sliver of boutiques, galleries, book stores, more cafés and small restaurants.  One café in particular, La Procope, is reputed to be the first to serve coffee, in 1686. Subsequently, it served the likes of Robespierre, Voltaire, Rousseau, Marat, and even America’s Benjamin Franklin.  Historical associations are everywhere and one could spend days walking in the footsteps of famous people, but I continued strolling the lively, atmospheric corridor, knowing I would return for either a late afternoon coffee or an after dinner drink.

Further on, rue Ste. André des Arts become rue de Buci, which teemed with an amazing morning market. I avoided the lively crowd by heading toward the boulevard St. Germain. I turned right and walked past the St. Germain des Prés metro station, and stopped at the intersection of three of the most celebrated establishments in 20th century Parisian history: Les Deux Maggots, Café de Flore and the Brasserie Lipp.  Here, writers, musicians, philosophers, artists and intellectuals comprised the hub of the bohemian zeitgist: Camus, Picasso, Sartre, de Beauvoir, Hemingway and Breton among them. For my first grande crème of the day, I singled out the Café de Flore for its art deco interior, and chose a seat facing the street where I enjoyed watching a delicious slice of Parisian society pass by.

After drinking my rather expensive coffee (more than double the price for the same coffee in the small village where I live), I meandered up boulevard St.Germain for no other reason than I liked the way the light was filtering through the trees, calling me forth. And really, does one need a better reason? At rue de Bac I turned left.  I’d never come this way before, at least on foot, and everything looked different.  The shops gave way to handsome 18th century houses, some with hidden courtyards, most decorated with fanciful pots of flowers in varying degrees of bloom.  I had a vague memory of the Musée Maillol (brimming with nudes) being in this area, and when I crossed the rue de Grenelle, I was not surprised to see it just around the corner. Disappointingly, it was closed. 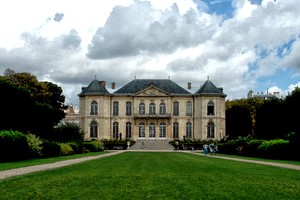 I continued along rue de Bac, passing one aristocratic house after another, then turned right on rue de Varenne, my attention drawn to a cluster of black town cars at the end of the street.  I had no idea the Prime Minister’s house, Hôtel Matignon, was on this street.  I crossed to the other side for a better perspective, but kept moving so as not to draw any undue attention by lingering a bit too long.  I soon realized I had absolutely no idea where I was. It’s true: I was lost. I couldn’t see any familiar landmarks above the rooftops which now all looked the same.  I knew I hadn’t strayed too far from the river, but nonetheless couldn’t adjust my internal compass, so I continued in the direction I was already headed until I saw what appeared to be a grand mansion encircled by a walled garden on the other side of the street.  Inadvertently, I had found the Musée Rodin, and it was open.

Upon entering the museum grounds I came face to face with his most famous sculpture, The Thinker, which overlooks the gardens.  The house itself, the Hôtel Biron, is a 17th century chateau once owned by the Duc de Biron. It had many uses until the state took it over in 1905 and turned its grounds into a park and its dilapidated chateau into artists’ studios. Jean Cocteau, Matisse, Isadora Duncan, as well as Clara Westhoff (a sculptor and the wife of the poet, Rainer Maria Rilke) worked and resided there. Rilke, Rodin’s secretary at the time, encouraged the master to move into the chateau. He wrote, “My dearest friend, you should see this beautiful building and the room I have just moved into today.  Its three wings have a wonderful view onto an overgrown garden where occasionally you can see rabbits jumping gaily through the fences just like on old tapestries.” 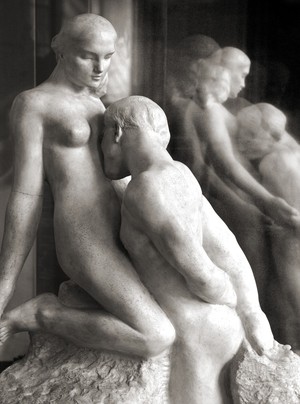 Rodin moved into the building at the age of 68 and purchased it within a year. He used the Biron as his workshop until his death in 1917.  Before dying he bequeathed it to the state on the condition it be turned into a museum dedicated to his work. I recalled from an art history text that Rodin had been accused many times of taking casts of live models. Now that I was confronted by his incredible body of work, I could plainly see why so many critics questioned his skill.  Besides his most notable pieces like The Kiss and The Gates of Hell, the Biron holds over 6,000 works in terra cotta, plaster, glass, bronze, marble, stoneware and wax and more than 7,000 paintings and sketches. Currently displayed are paintings by Monet, Renoir and Van Gogh from Rodin’s personal collection. A separate room is dedicated to the works of Camille Claudel, his student and lover.

I spent more than two hours at the museum, wandering inside and out trying to imagine what it must have been like to have lived there. Rodin’s mastery of light, shadow and form were mesmerizing. Lost in Paris, I found the Rodin Museum. And I’m glad I did.