Diamonds, Rubies and a Dragon: All that Dazzles at the Louvre

Collecting precious stones seems to have always been part of the job description for any self-respecting king. In France, it started with François 1er and carried on with all French monarchs and, later, emperors.

Louis XIV, in particular, had a real passion for diamonds. Knowing the power of a good entrance, he had them stitched upon his clothes, because clearly those that adorned his many jewels were not enough.

His collection included the several stunning pieces he had inherited from Cardinal Mazarin. He then purchased some more from Jean Baptiste Tavernier, the gem merchant turned explorer who traveled to Persia and India and brought back, amongst other marvels, the heart-shaped French Blue diamond the king fell in love with.

By the time Louis XIV died, his collection of diamonds included more than 6000 stones and was evaluated at 12 million livres (around 700 million US dollars today). But the Sun King collected so much more, and it will only take you a trip to the Louvre to find out.

In fact, thanks to the generosity of a sponsor, high jewelry house Cartier, the Galerie d’Apollon (which served as inspiration for Versailles Hall of Mirrors) has been totally refurbished and the French crown jewels and gem collection are now displayed in all their glory. 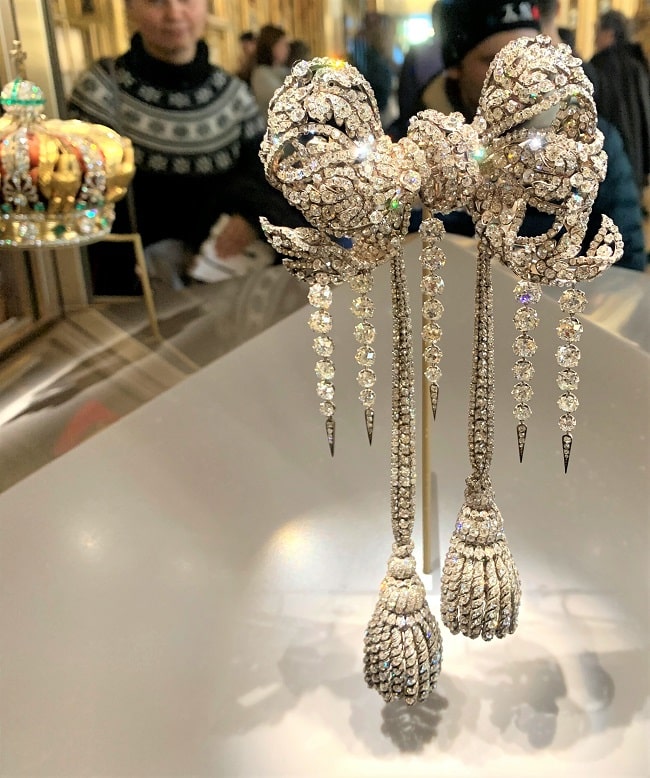 It is virtually impossible not to be taken aback upon entering this opulently Baroque state room, decorated with intricate golden mouldings and frescoes, especially if the sun is shining through the windows overlooking the Seine, because the rooms dazzles with a thousand fires.

While the French Blue is gone forever (nowadays displayed at the Smithsonian under its new name, the Hope diamond, after it was stolen at the peak of the Revolution, smuggled to the United Kingdom, recut to a less conspicuous shape and sold off), we can still swoon over the Régent, the Sancy and the pink-hued Hortense. We can also admire the only gem still surviving from François Ier’s initial collection, the ruby-red spinel that Louis XV had re-cut in a dragon shape and had mounted, together with the French Blue, on his Order of the Golden Fleece insignia.

In the next display, we discover what is left of the proper high jewelry that French queens and empresses wore.

The collection is vast, much bigger than I expected, considering that in 1792 the collection, under less than zealous surveillance by the National Guard, had been pillaged by robbers. What the robbers had missed was sold by the Third Republic in a firesale in 1887. Thankfully, in recent years the Louvre, with substantial help from its patrons, has done a phenomenal job in purchasing back the crown jewels coming up for sale. 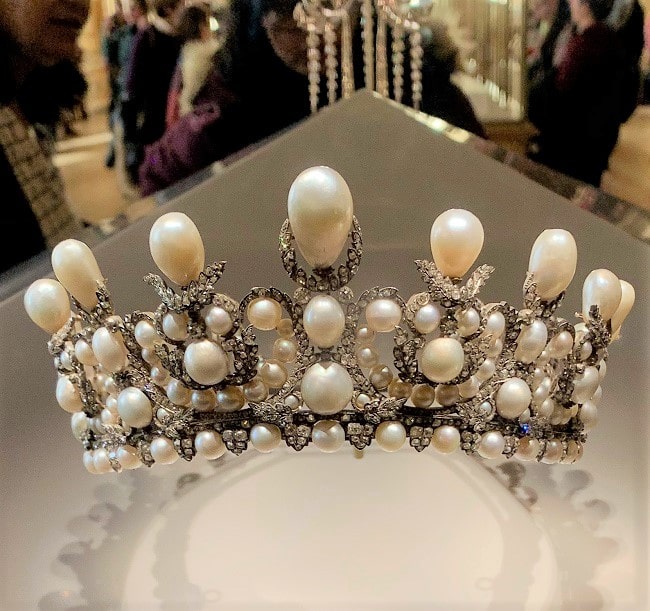 Unsurprisingly, most of the mounts date back to the 19th century, as it was customary to re-use the precious stones into new designs. Napoleon III’s wife, style icon Empress Eugenie, in particular, left us many remarkable sparklers, including a stomacher (a drooping brooch that would be worn in the middle of the torso) set with many of Mazarin’s trophy diamonds.

While I was duly wowed by the jewelry, it was at the very end of the room that I found the piece I’d really want to posses if I were a queen. It’s not a tiara and it’s not a diamond, but a Byzantine sardonyx ewer with a gold mount shaped like a dragon. It is part of Louis XIV’s collection of royal gems, an eclectic mix of cups, vessels and other decorative objects, carved in the Renaissance from semi-precious stones and later embellished in the 17th century with silver and gold mounts crafted by the best Italian and French goldsmiths. If you observe “my” decanter closely, you will see that the dragon’s tongue sticks out and wiggles as the floor vibrates with the steps of visitors.

The Galerie d’Apollon is situated in the Denon wing at the Louvre. 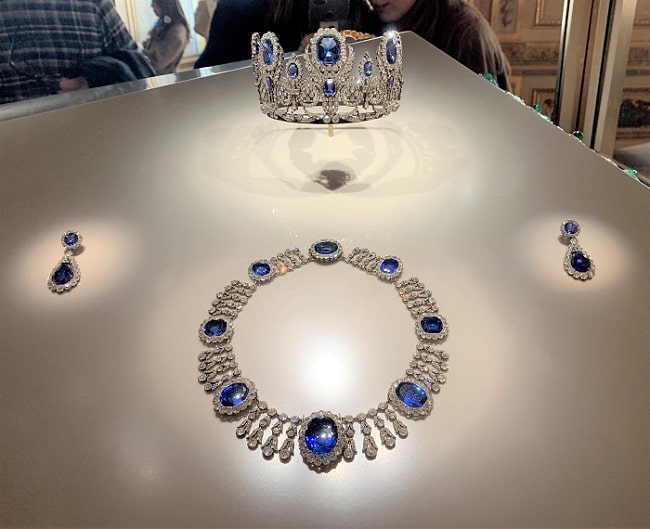