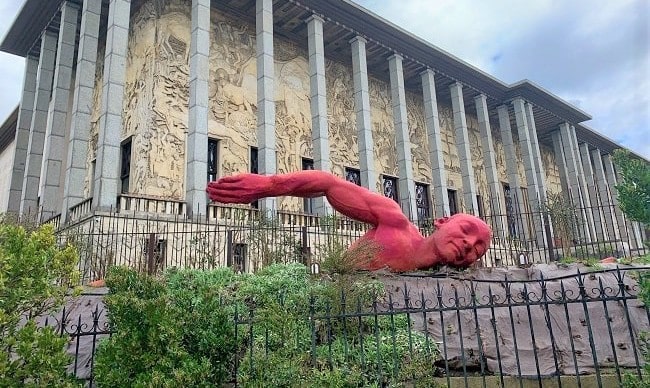 [Editor’s note: This terrific exhibit has been extended until January 3, 2021.]

Paris is on lock-down. Social distancing is not an option, but a necessity right now.

Thankfully, over the past month I had gone on a museum bender, stockpiling on art and culture at all the exhibitions that had just opened. Amongst those, the retrospective that Palais de la Porte Dorée dedicates to shoe maestro Christian Louboutin, because I am no Carrie Bradshaw but I do love a good pair of heels. 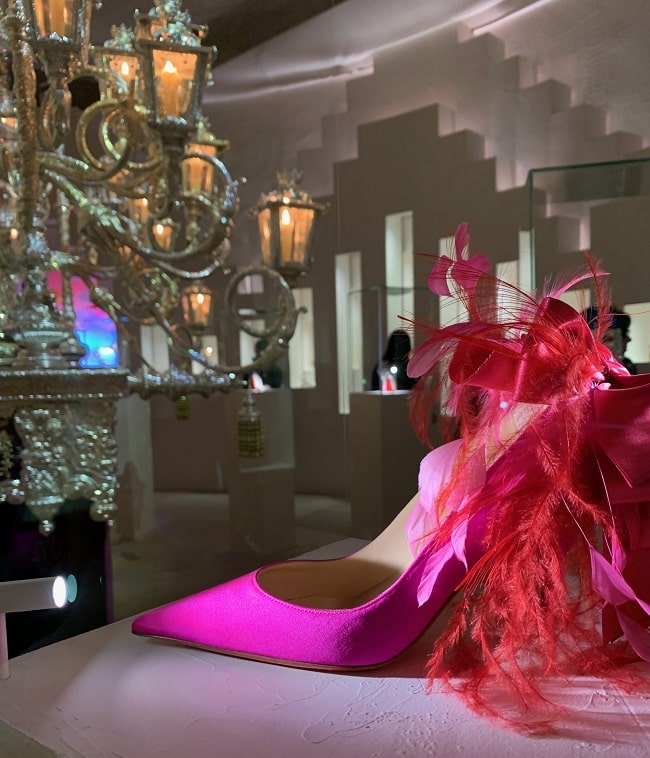 I feel a bit sheepish admitting that I had never been to the Palais de la Porte Dorée before; in fact, I had never heard of it. Shame on me really, because it’s one of the prettiest Art Deco buildings in the city. Erected for the Exposition Internationale in 1931, its vocation was to promote the arts and culture of the French colonies, inviting the visitor to “go around the world in a day” by exploring the pavilions dedicated to the far flung overseas territories. Today it houses the Musée de l’Immigration alongside a small aquarium.

Christian Louboutin was a regular in the 1980s. He lived nearby and would frequent it with his family, enchanted by the tropical aquarium but also savoring the beauty of this building itself and the period rooms decorated by celebrated decorator Jacques-Émile Ruhlmann. It was in the course of a visit with his mother that he saw a sign forbidding the use of high-heeled shoes inside the museum, because the beautiful mosaic tiles decorating its floors were too fragile. 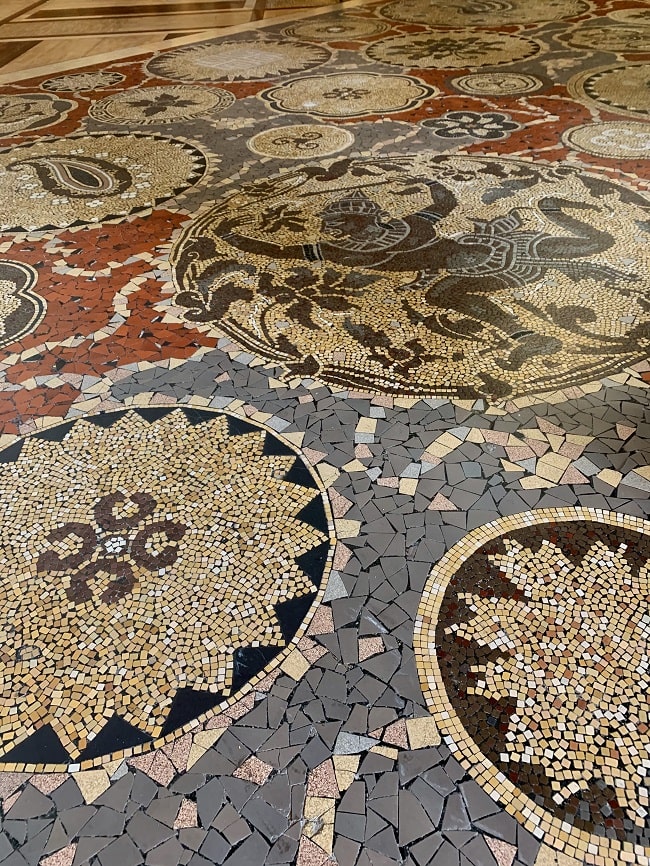 The black stiletto silhouette, barred with a fire hydrant red cross, was a revelation: he would design shoes.

From stained-glass windows depicting Louboutin’s iconic creations, to an altar-like construction celebrating Cinderella’s glass slipper (a palanquin built in Spain and embroidered in India), the exhibition is a no-expenses spared, over-the-top affair.

Shoes come in every shape and color, their signature pillar-box red soles ubiquitous, as is their sexiness (clearly, comfort is not a top design priority here). The woman choosing to wear some of the most daring models must be a bit of an exhibitionist, and maybe the title of the show, Christian Louboutin: L’Exhibition[niste], aims to describe her more than the designer himself. 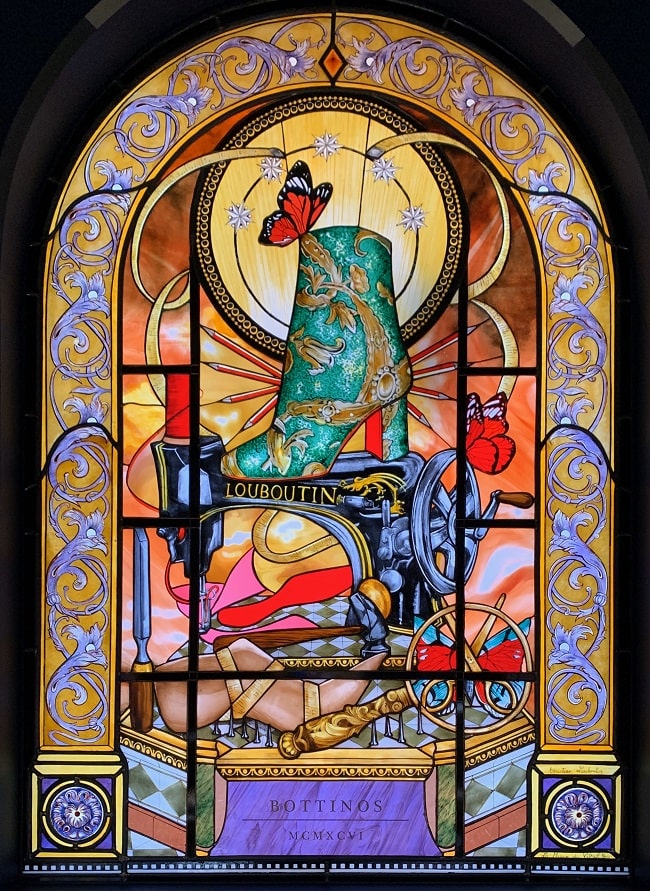 In a series of short, rather funny videos detailing the production process, Louboutin pays tribute to the artisan cobblers putting together his shoes by hand. A virtual show featuring a hologram of one of his closest friends and patrons, burlesque diva Dita von Teese, is staged in a theatre decorated by Buthanese master carvers. A mirrored gallery celebrates the popular image of the celebrity cobbler: Aretha Franklin was buried in her Louboutins, Barbie and Miss Piggy have their own made-to-measure versions and, obviously, the pink ruffled pair Carrie Bradshaw wore have pride of place.

The second part of the exhibition is dedicated to the celebrity cobbler’s sources of inspiration. They range from the Renaissance to contemporary art, span all continents and media and offer us a glimpse into Louboutin’s creative process. His extensive travels in particular seem to offer him endless stimulation. 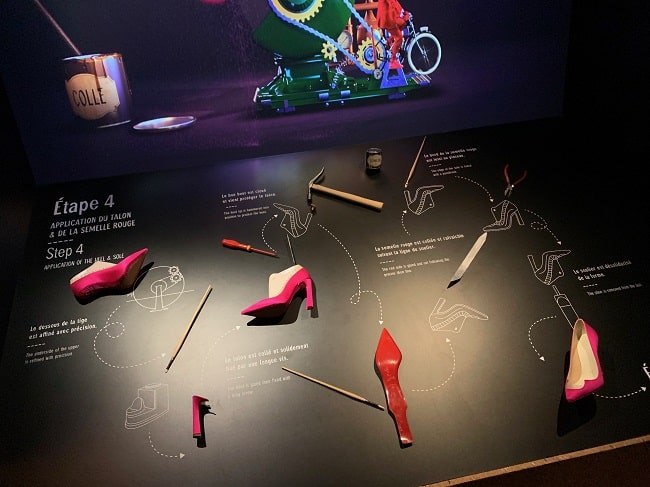 The graphic quality of the displays, where the shadows projected by the various objects are almost as important as the artifacts themselves, resonates with the sketches of shoes scattered around, as do the silhouettes of the unwearable shoes produced by Louboutin in 2007 for a photography collaboration with director David Lynch, exhibited in a sombre PG-rated section of the show.

As soon as I leave the exhibition rooms and find myself back in the luminous hall of the museum, a burden seems to lift. As I reflect on what I have just seen, I tell myself that while I admire Louboutin’s boundless creativity and the splendid staging of the show, I wonder about how he really feels about women. True, the show celebrates his female friends and muses, but let’s be honest, some of his creations, decorated with spikes or perched atop 15 centimeters of pinhead heels, look more like torture implements than shoes made to be worn in everyday life. Or have I just been wearing trainers too often recently because of the transport strikes and lockdown?

The exhibition at the Palais de la Porte Dorée (12th arrondissement) will run until January 3, 2021. 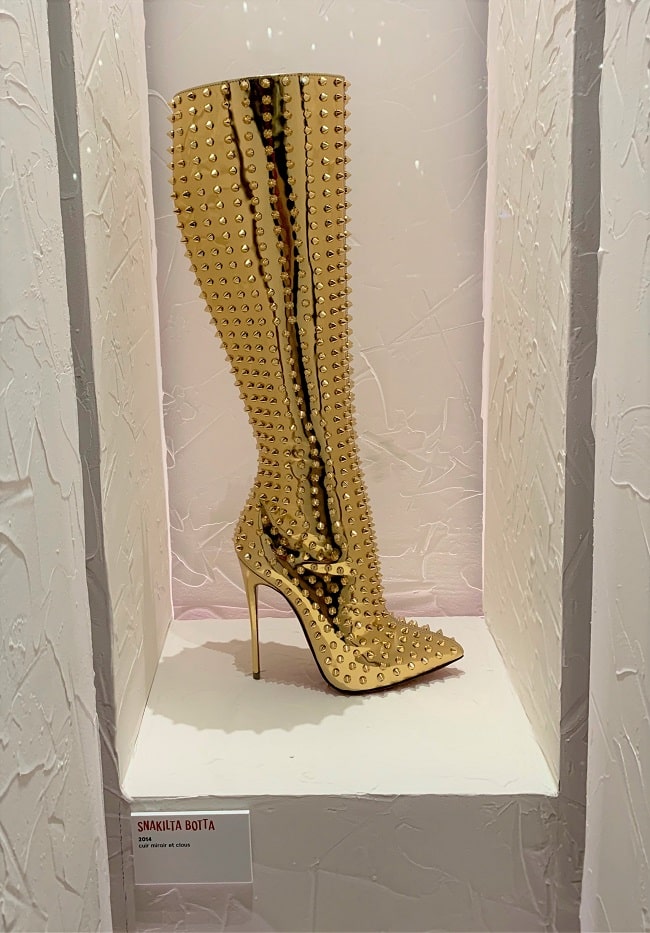 Previous Article Quartier Postcards: What Paris Looks Like under Lockdown
Next Article 50 Things I Miss About Paris: Part V