Paris has entered the fifth week of lockdown because of the coronavirus pandemic. On Monday evening, President Emmanuel Macron announced that France would remain in strict quarantine until May 11. It’s a stressful and anxiety-ridden time, and Parisians are doing their best under the terms of le confinement— but it’s not easy. Gorgeous spring weather would usually lure urbanites to the city’s sidewalk terrasses and for picnics on the Seine. Instead, we are allowed out for an hour a day. Here some of our Bonjour Paris contributors share “quartier postcards” of what the city looks like empty of its residents.

“Pictured above, the clip clop of the Republican Guard horses echoes eerily on a silent Ile Saint-Louis.”

“A fluttering “barrier” to the Seine says it all.” 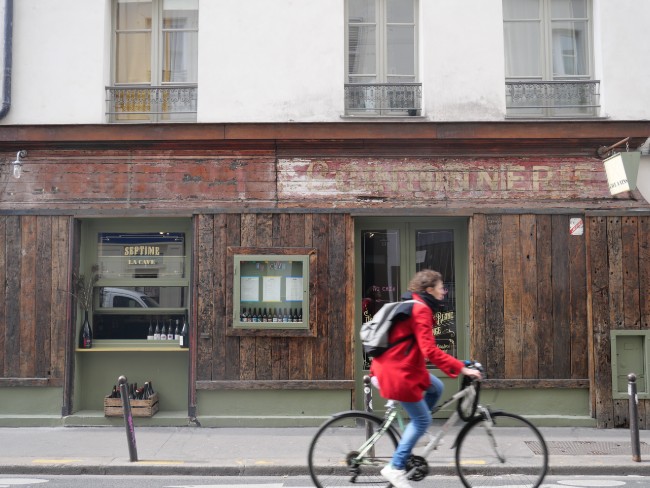 “Although the streets of Paris feel so strangely quiet at the moment, particularly in the 11eme where I live, which is packed with bistros and bars, it’s been uplifting to see such support for the small businesses who have worked out ways to keep going, not only to keep their livelihood going, but also to keep us going. Thanks to the fromageries that have stayed open, and bakeries who have made the effort to deliver, we’ve still been able to enjoy the small but “essential” pleasures in France such as fresh bread, artisan cheese, and in the case of Septime La Cave, who have thankfully set up a pick-up service through an open window, bottles of excellent French wine, the ultimate lockdown essential!”

— Nicola Leigh Stewart is a food and travel writer based in Paris. 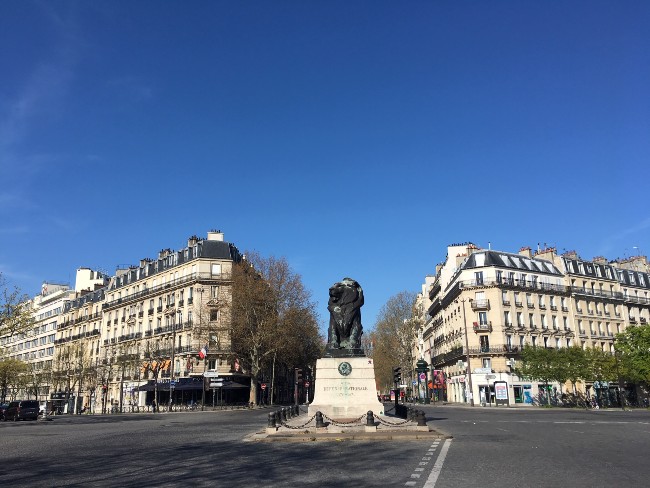 “The Place Denfert-Rochereau is usually one of the busiest places on the Left Bank, clogged with traffic circling the Lion de Belfort, a magnificent sculpture by Auguste Bartholdi, famous for creating the Statue of Liberty. I’ve never seen it empty of cars. During the lockdown, under gorgeous blue skies, it’s a sight to behold. The entrance to the Catacombs is also found here, with a line usually snaking around the block. Now the facade appears a bit lonely without the eager tourists waiting to head underground…”

— Mary Winston Nicklin is the editor of Bonjour Paris 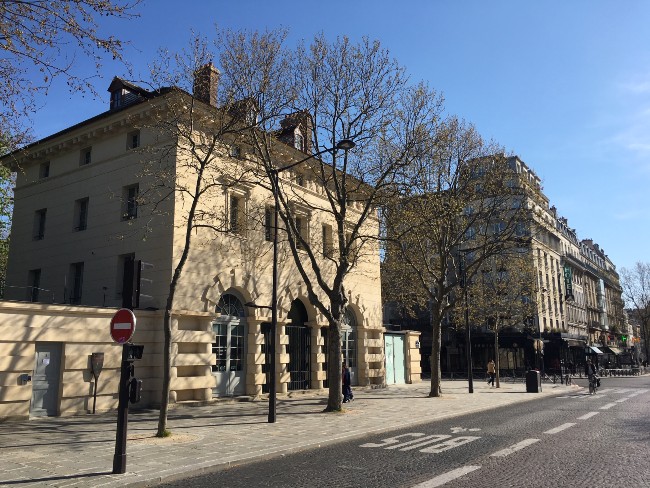 No line outside the Catacombs

“The usual bustling Haut Marais is now quieter than a Sunday in August while we all remain shuttered inside.”

— Kasia Dietz is a handbag designer and freelance writer from New York, with a passion for art, fashion and travel, who followed her heart to Paris. 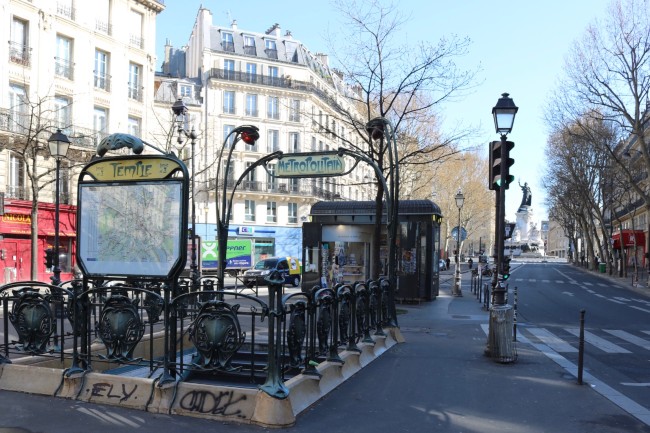 The Haut Marais neighborhood during the quarantine. Photo: Kasia Dietz 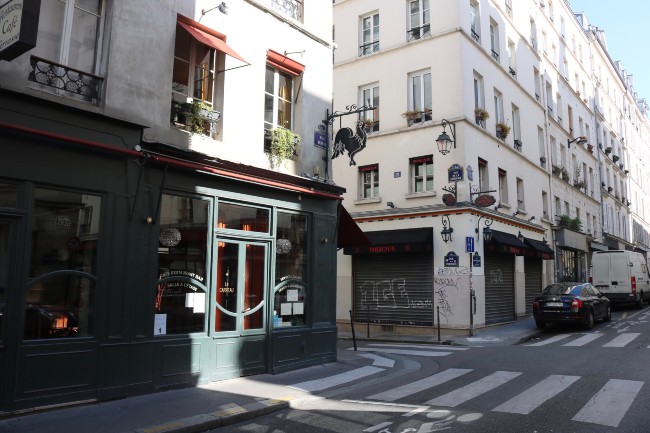 The Haut Marais neighborhood during the quarantine. Photo: Kasia Dietz

Notre Dame and the Riverside Quays

“The photo (below) shows Notre Dame Cathedral reflected in the window of the most excellent A. Lacroix Pâtissier at 11 Quai de Montebello in the 5th, which is owned by my dear friends Arnaud Lacroix, a master chocolatier and boulanger, and his wife, Jackie Gibson. It was my go-to carry-out and I dearly miss it. Arnaud’s creations are a cut above, and the atmosphere warm and welcoming.

The second photo (below) shows a driver, also near Notre Dame, wearing a face mask, as many people do now.

The third photo (below) depicts the empty sidewalks and closed bouquiniste stalls along the river near Notre Dame. To the left is a group of police patrolling the streets.

— Diane Stamm is a long-time contributor to Bonjour Paris. 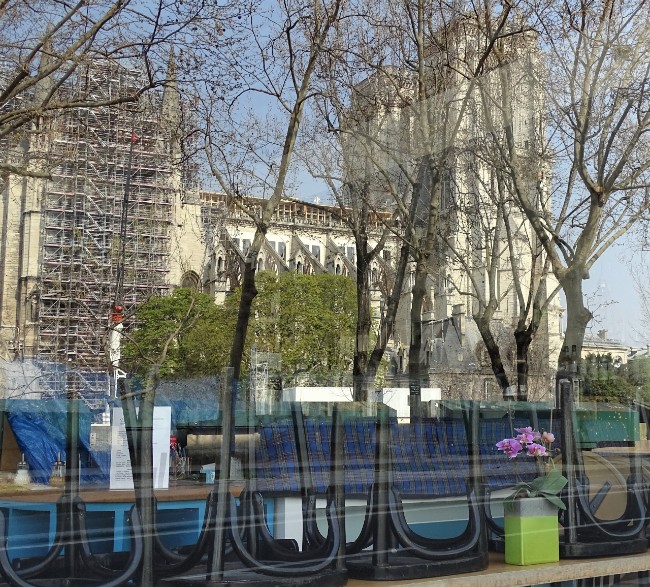 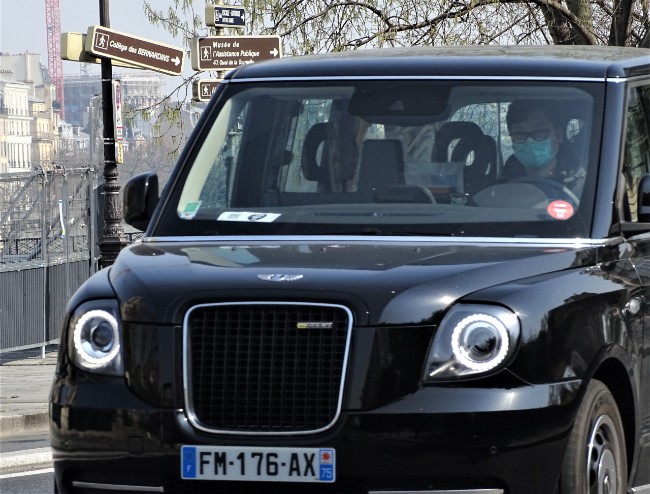 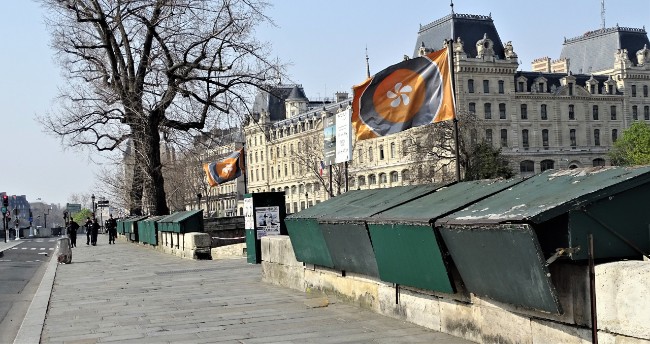 “The picture below was taken on Boulevard Flandrin in the 16th arrondissement, not far from Porte Dauphine. It’s bizarre to see the empty playground in Square Jan Doornik.”

— Sarah Bartesaghi Truong is the founder of VeniVidiParis, a company that curates itineraries in the French capital for travelers wishing to discover the city’s vibrant art scene. 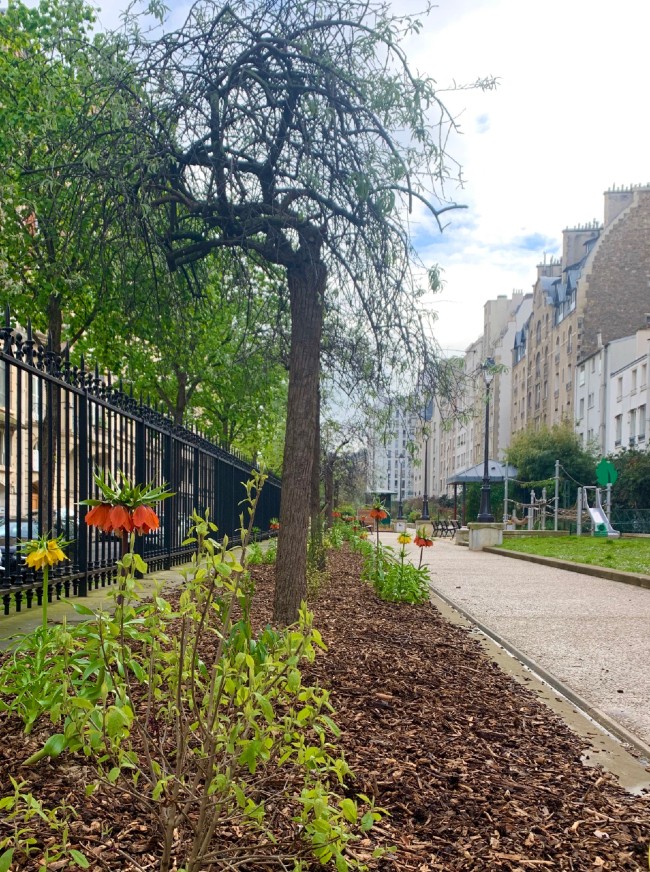