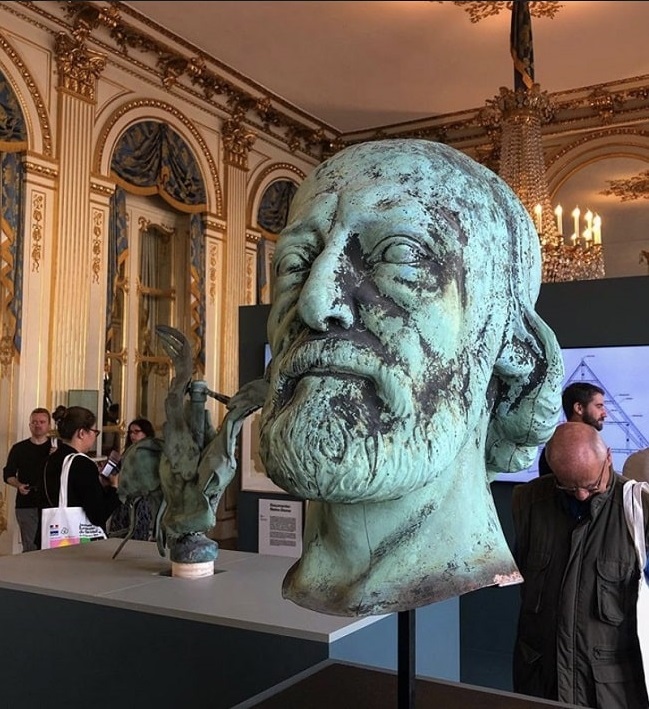 [Editor’s Note: During the season of Lent in Paris, the Holy Crown of Thorns is usually presented to the public at Notre-Dame de Paris each Friday at 3 pm until Easter (and all day on Good Friday). Because of the reconstruction work at Notre-Dame, the viewing will take place this year at the Saint-Germain-l’Auxerrois church.]

When the fire spread through Notre-Dame de Paris last year on April 15, all of our worst fears came to light. The beautiful church that has stood for over 850 years and lived through the Revolution, Occupation and multiple restorations was now on the brink of total loss. Because of the brave work of the many pompiers, she was saved and still stands today– a little beat up but she’s still there.

I have been in love with Notre-Dame de Paris long before I ever saw her. My grandfather took countless photos of the church facade and high atop the towers and even brought back a gargoyle that matches the same one his aunt purchased at the church in 1904. With a need to know everything about the many statues and details, I enrolled in an online class through Yale University. It was a dream and the next time I saw the cathedral, she came to life before my eyes. I would spend hours upon hours, notebook and camera in hand, documenting every single thing inside the chapels and on the walls. Today I am so very happy I have those records and can relive every square inch.

Since that fateful day, good news comes out all the time. While the roof was destroyed and the ceiling fell into the crossing, within the rubble they were able to find the rooster that sat at the top of the spire. Inside the church as the burning embers came down around the 14th century Virgin Mary, she survived without a scratch. Everything in the Treasury that sits off the main building survived and was removed that night by quick thinking officials. And while the water poured in to put out the fire, the many paintings– some of which were painted by Charles Le Brun and Laurent de La Hyre– all survived. Today we are very lucky that many of these things are being exhibited across Paris so we can see even just a small part of Notre Dame before the long restoration is finally finished. 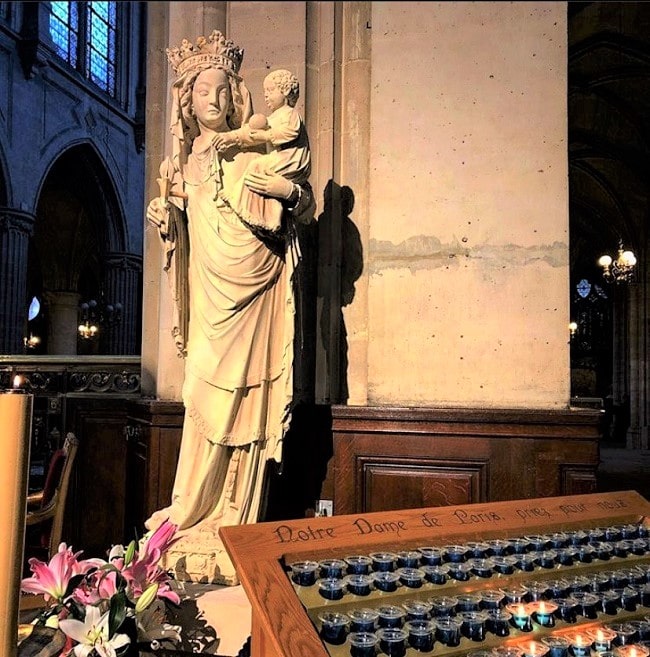 Just to the right of the altar in Notre-Dame de Paris stood the Virgin Mary, or Virgin of the Pillar statue, dating back to the start of the 14th century. One of the oldest things inside all of Notre Dame, it was in the clear path of destruction. Originally this beauty was in the Chapel Saint-Aignan that once called the Ile de la Cité home. Built in the 12th century, Saint-Aignan would see the ancient lovers Heloise and Abélard as devotees. When it was partially destroyed in 1791, the Virgin Mary was removed and, under the restoration of Viollet-le-Duc, it was placed near the edge of the south transept in 1855. The gothic statue represents the virgin with a crown reminding us of her royalty while she holds the baby Jesus who is playing with a buckle on her gown. Holding a lily in her right hand and in his hand he holds an orb representing the world, and in part telling us that he is Salvator Mundi, the savior of the world.

Earlier this year, she would reappear quietly, cleaned up and looking better than ever. She can now be found in the same right corner of the altar, now in Saint Germain l’Auxerrois. Once the former church for the royalty living in the Palais du Louvre, this beautiful and quiet church is worth at least an hour to explore. Along with the Virgin Mary, the large candle holders have also been moved here. Be sure to walk around and see the stunning stained glass windows, carved wood and Flemish altarpiece. Light a candle to Notre Dame before you leave, and a wish for her speedy return.

With a giant stroke of luck, just a few days before the fire, the 16 verdigris copper statues by Adolphe Geoffroy-Dechaume were removed for restoration. They consist of four symbols– an ox for Luke, a lion for Mark, an eagle for John and an angel for Matthew– alongside the 12 apostles, with one looking a bit different from the others. Eleven of the apostles face away from the spire, looking out across from Paris, however on the southeast side at the top, one was looking up at the spire. Adolphe used the face of Viollet-le-Duc on Saint Thomas, the saint who only believed what he physically could see. In the end Viollet-le-Duc was able to look at his creation up until its last days. 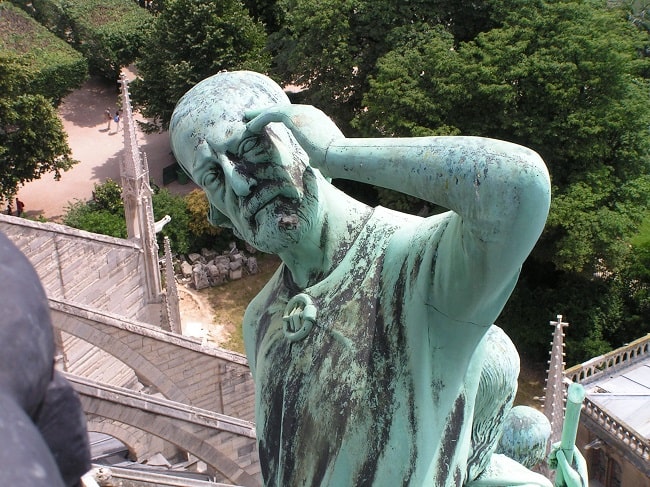 In the wonderful Cité de l’Architecture et Patrimoine situated just across from the Eiffel Tower, until July 3, you will have a once in a lifetime chance to come face to face with some truly stunning pieces of Notre Dame. Inside this wonderful museum– a must for any history or architecture fans– are four pieces that were once out of reach. The eagle of Saint John and the angel of Saint Matthew are so close you can almost touch them. The head of the man behind the largest restoration, Monsieur Viollet-le-Duc looks on while the most amazing piece still awaits you. Atop the spire since 1935 was a copper rooster placed there by Cardinal Verdier and filled with the relics of Saint Geneviève, Saint Denis and a piece from Christ’s Crown of Thorns. As the fire burned and the spire fell it was all I could think about; these irreplaceable treasures would be lost forever. Like a phoenix they rose from the ashes, a bit banged up but more beautiful than ever. Do not miss the chance to see this in person. Also on view at the museum is an exhibition on the designing and building of the spire by Viollet-le-Duc with many never before seen drawings and models.

Of all the relics of Notre-Dame de Paris, the most priceless is the Crown of Thorns. Purchased by Saint Louis in 1238, he would have Sainte Chapelle built to house it until the French Revolution when it was later moved to Notre Dame. It would see the light of day the first Friday of every month and during Lent each year until last April when the fire took place just days before Easter. It had to be the most important thing they saved that night as the long daisy chain of people handed one treasure after another as the fire raged above. This last week it was announced that this priceless treasure would have a new home each Friday at 3:00 p.m. during Lent starting on February 28 ending on Good Friday in Saint Germain l’Auxerrois. 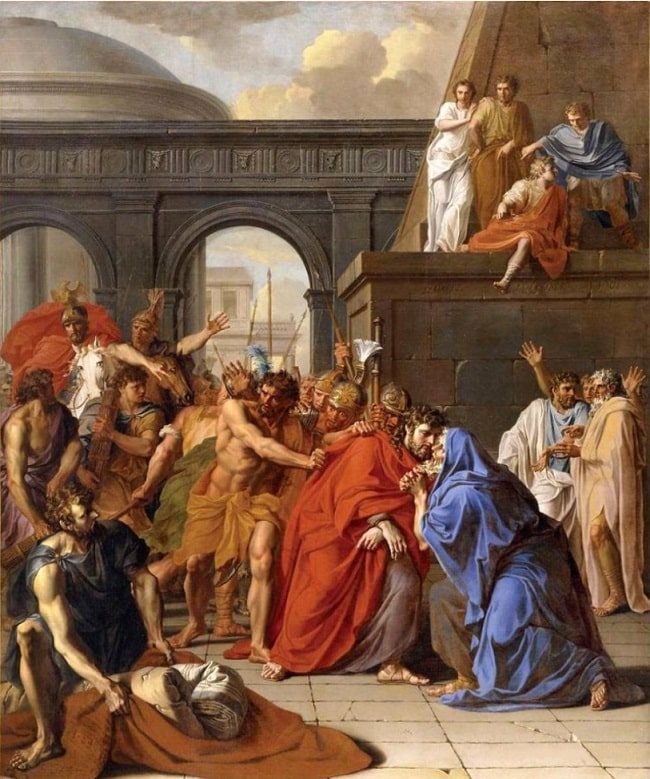 The many paintings that filled the chapels are safely in the hands of the Musée du Louvre being restored to their former glory after years of candle soot and dust. The Louvre will hold a grand exhibition of the Notre Dame treasures including the many Le Mays paintings, but not until 2024. (I can hardly take how far off that is.) However, you can view on display in the permanent collection a few of the paintings that once called Notre Dame home. During the 17th and 18th centuries the Goldsmiths Guild of Paris would donate a large painting, called Le Mays, to the Notre-Dame de Paris. Given on the 1st of May between 1630 and 1707, with the exception of the years 1683 and 1694. The many stories of the Apostles were normally the subject of the large tableaus that would hang on a central pillar in the nave on the 1st of May. Over the years the over 75 paintings would disappear, be destroyed in the Revolution or be moved to other churches. The Musée du Louvre has eight in their collection prior to the fire at Notre-Dame. Notre-Dame herself still had 13 hanging in the side chapels. Amazing painters of the day, Charles Le Brun, Jean-Baptiste de Champaigne, Noel Coypel and Eustache Le Sueur are just a few of the names that created these great works for Our Lady. Within the Louvre only two are currently on display, Coypel’s Saint James the greater led to Martyrdom and Le Sueur’s La Prediction de Saint Paul Éphèse. You can find them in the Sully wing on the 2nd floor in salle 915.

The Treasury that sat just off the south transept of Notre Dame de Paris was filled with reliquaries, chalices, paintings and even the tunic worn by Saint Louis. The small but beautifully done museum contained the history of Paris and Notre Dame. One gorgeous piece after another that holds a relic of a saint and the living history dating back to Saint Denis. At the end of last year, Notre Dame officials announced, with the Hotel Dieu, they will open an exhibition telling the story of the construction of the Cathedral and also include many of the treasures that have been locked away. Located just across the square in front of Notre Dame, the Hotel Dieu is the oldest hospital in Paris and largely empty. It will be the perfect place for all to come and admire and learn a little more about the history of this great building that still has many chapters yet to be written. Also when you are there, if you are really sneaky venture up the stairs and out onto the upper terrace for an amazing view of Our Lady. The exhibition should open in June and run until 2022 or 2023. 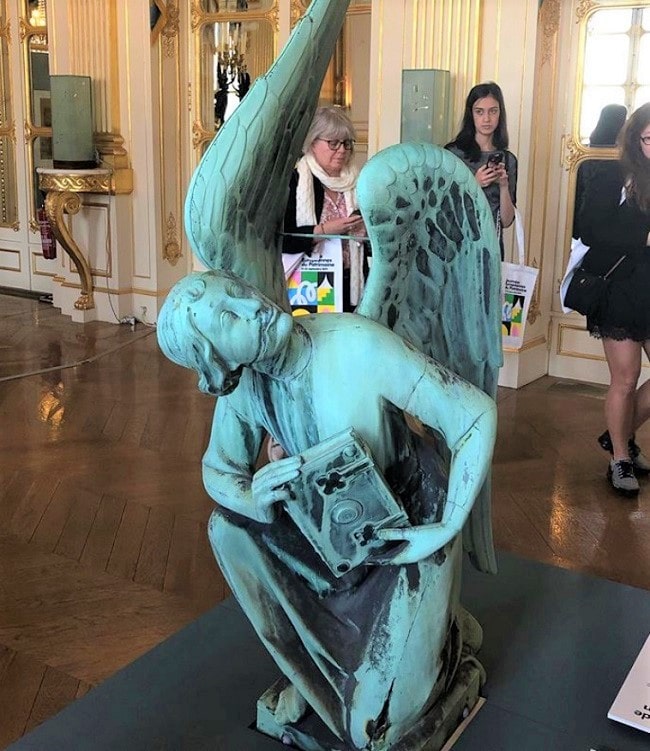 Claudine Hemingway had a deep love of Paris instilled in her at an early age from her beloved grandparents. Following in their footsteps, she is happiest strolling the historic cobblestones soaking in the architecture, art and history. Highly sought after to plan your Parisian adventure that ventures off the beaten path and digs deeper into the historic and secret Paris. Contact her at [email protected]dinehemingway.com to plan your trip. You can follow her adventure and daily Paris history lesson on Instagram @claudinebleublonderouge