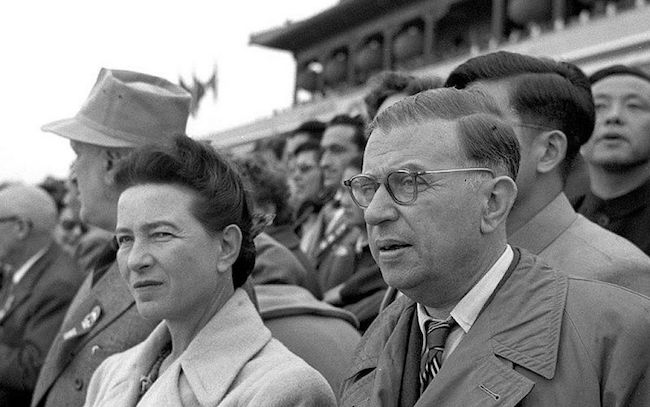 France has always been populated with great artists and philosophers, and two of the most loved and controversial of France’s thinkers were Jean Paul Sartre and Simone de Beauvoir. Separately they helped influence the way the world views the concept of the Self and its relation to personal freedom. Together they challenged the way we view commitments and relationships.

Jean Paul Sartre is often considered the father of Existentialism. With his wide array of publications he championed the philosophy that “existence precedes essence.” Through his many novels, plays, and short stories he communicated to his audience that having a complete and utter acceptance and responsibility for one’s actions is the only way to truly achieve freedom.

A notorious fiend for work, Sartre did not only occupy his time with his philosophical teachings.  After being drafted in 1939, he endured a treacherous period as a prisoner of war where he spent much of his time reading and developing his theories. Upon his release he returned to Paris where he began his socio-political campaign. In 1941, he along with de Beauvoir and other notable French writers of the time, began an underground resistance group called Socialisme et Liberté. Though Sartre was exceedingly passionate about the group, it failed to take off and he resigned to teaching and writing. 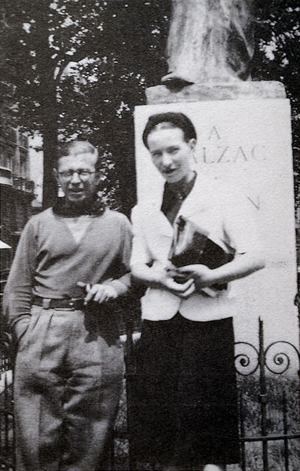 Writer, activist, philosopher, and feminist Simone de Beauvoir, like Sartre, was responsible for shaping the post-war minds of France and the world. Her book The Second Sex has frequently been considered the spark that fueled the modern feminist movement of the 1960’s.

It was while de Beauvoir was studying philosophy at the Sorbonne in 1929 that she met Jean Paul Sartre for the first time. Simone being only 21, was one of the youngest pupils in her advanced studies and her only competitor was, of course, Sartre. 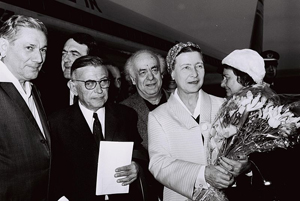 As their courtship progressed it became clear to both of them that they did not desire to have a conventional relationship. These two bold and intellectually rebellious young Parisians had been defying modern thought and striking their own unique paths in the world, so it does not come as a surprise that the accepted rules of a relationship would seem unappealing.

It was early on that they initiated what they defined as a “transparency pact”. They would be allowed to live their lives, free to take other lovers and live where ever they pleased, as long as they told one another everything. And they did…for 51 years.

Within that half century, the two great minds provided nearly everything two lovers could for one another. They would camp out in the cafes of Montparnasse and debate and discuss grandiose ideas, and read one another’s work until the early dawn. Circulating within the same intellectual groups, their open relationship was not seen as taboo, but admired. What they may have lacked in monogamy, they certainly made up for in philosophical stimulus.

Both writers did indeed keep many assorted lovers; some flings while others were affairs that lasted many years. All the while though, Sartre and de Beauvoir kept their pact of transparency, being totally open and honest about their lives. 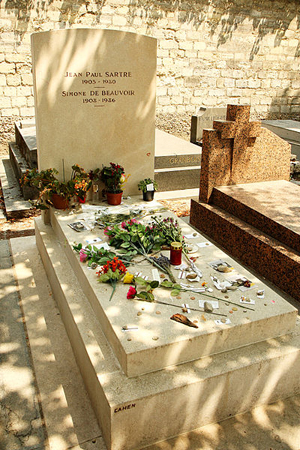 Perhaps it only makes sense, that two people who were so focused on the pursuit of being, existing, and absorbing the experiences of life would be adverse to any kind of social censorship. Even outside of his relationship with de Beauvior, Sartre’s actions proved this aim.

People often commented that his hygiene and physical appearance seemed to be of no concern to him. Additionally, in 1964 he refused to accept the Nobel Peace Prize he was awarded due to moral objection.

The utter acceptance for personal responsibility can be a conflicting issue that many people battle with for their entire lives. It is amazing that these two great minds had the personal resolve and dedication to this philosophy, and also that they chose to pursue it hand and hand.

Though never married, the two soulmates Jean Paul Sartre and Simone de Beauvior are buried next to one another in the Cimetiére du Montparnasse.

Previous Article Interview with Yannick Alléno
Next Article Photo of the Week – March 29, 2013