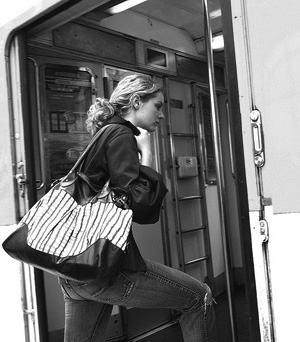 I can’t really tell which one is more admirable or, anyway, stranger, the boy or the pretty girl.  She’s perched over to my right on a jump seat, the twin of mine. She got on the métro just behind me, so I got the strapontin on the far side of the car where I can stretch my legs out and leave them stretched since the doors don’t open. As soon as she sat down, she rummaged in her bag— it really ought to have wheels, given its size and evident weight—and took out her makeup.

For the last five or six minutes, she has been applying mascara, a good 500 grams, I’d guess, without any stray lines or blots or a poke in the eye. She has the concentration of a chess master or a pole-vaulter, single minded, at one with her brush and mirror. Et oh la vache, what a steady hand! When I try to write in a notebook pinned to my knee in the subway, I come up with something that would have stumped Champollion. Her performance is flawless even if her eyelids droop under the weight of her makeup.

The boy is in her league, bet on it. He’s sitting opposite me, one notch to my right and swiveled slightly to his left so his feet are in the aisle, and I can see the book he is reading and underlining. He reads a page and underlines as he goes. Ordinary enough. Then he reads the page over and underlines some more and so on until the entire page is underlined in a snot-green ink that makes the page, even at my safe distance of two metres or so, a little giddying. But his hand, like the girl’s, is steady and the lines as far as I can make out are as straight as any line ever drawn freehand. Piranesi and Dali, the greatest draughtsmen, would have admired. I can do no less— though I’m nagged with a thought that it would be simpler to dunk the book in snot-green ink, or any other color, and be done with it all at once.

But he and the girl have something in common and foreign to me—the toughness of mind to see the work at hand as an object at the end of a narrow tunnel with nothing else in the line of sight, no peripheral vision, no peripheral thoughts, certainly no distracting impure ones, a world stripped down to brush and mirror, to book and pen. Om…

And so in my dharmic trance of blissed-out admiration, I miss my stop and get off at the next one, which is obviously neither here nor there to the boy and the girl. Nor to me, because I like to come up to the market, where I’ve been heading all along, from the north so that I go by a building that looks as if it escaped from a central European capital during a particularly glum moment in the Czech or Slovenian or Magyar architectural zeitgeist. A sore thumb in Haussmann’s Paris and proud of it. You show ’em, baby, I offer my regular greeting as I walk slowly by, then into the nub of a street leading to the market. 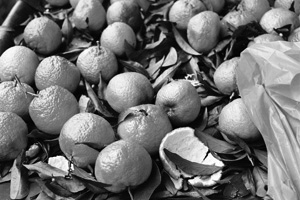 Two markets, really, and that’s why I come. The old covered market has been here since the eighteenth century, though the present building is from the middle of the nineteenth. The vendors selling their meat and fish, their pasta and vegetables, seem united in presenting a front of jovial hostility toward their customers, old ones and irregulars like me, without distinction or bias. If they are a little kinder to the man and woman shopping together in wheelchairs, I suspect it’s more condescension than fellow-feeling, but I’m not going to ask. After a quick circuit, I’m outside again, in the sun and the crowd, where the brocanteurs selling genuine junk and the sellers of vegetables and fruit at low prices and by the crate are merely sullen and edgy, as if they’re expecting a raid, as if their papers do not really exist, as if their produce has no papers either. I like the contrast of covered and open markets, but no less the crowd.

The market is a tableau vivant of égalité and almost of fraternité. Women whose outfits would pay my rent for a month shop shoulder to shoulder—if not arm in arm—with women who are wearing their entire wardrobes, dandies in Dior trade brotherly shoves with raggedy men without socks and few buttons on their shirts. It is the daily gorgeous Parisian parade of the slovenly, the splendid, and the plain ordinary, competing momentarily for the handsome toast rack or the best banana in the bunch, but otherwise taking no notice of one another. But odd man in and out, and freak-seeker to boot, I do hope to notice and without even trying I do.

Think of her, the women coming from my right, as Berthe aux grands nichons, seventy years old if a day, bosomy and giving in to the powers of gravity, but showing ample cleavage and, on Big Boobs Bertha’s left one, a blue tattoo. It may have been a cat when it was first inked on many years ago, but with the sag of weighty time it is about as catlike as lions and other unknown beasts in ancient woodcuts: whiskers like spikes, ears like instruments of torture, and an astigmatic elongation that would be worthy of El Greco if only the cat’s eyes were aimed hopefully at heaven. She’s a marvel—Bertha too. 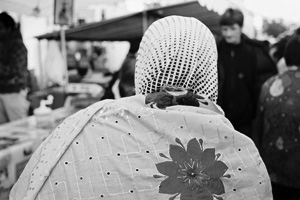 I wonder what she must have been like when she got that tattoo, thirty, forty years ago. Women didn’t routinely, let alone mindlessly, get tattoos in those days. Whatever her reason it must have been a good one considering her blue cat raised eyebrows and then some when she first got it— and it’s hard to believe she was any more modest about cleavage in those days. She was going to show them, all right. She must have been one tough customer and still looks the part. Her clothing is plain and not new, her face is weathered, her gray hair tied loosely in the back and hanging down a good two hands below her shoulders. If she notices me staring and smiling, she doesn’t let on, too busy being what she is and always has been to pay me any mind at all. And if I took my heart in my hands and asked her to tell me about the tattoo, I imagine she would say Quel tatouage, monsieur? suggesting that I might be seeing things. Worse, she might tell me the story and it would not be interesting because it was nobody’s business but hers: It wasn’t done in those days, monsieur? Really? Tiens, I never knew that. Okay, Berthe, you’re one tough cookie and a cool customer, too.

As good an exit line as I’ll find and start walking back the way I came, going home. The milling, bumping crowd thins out as soon as I’m just a dozen steps clear of the outdoor market, and the street straightens out in front of me. Not too far ahead, the man and the women in the wheelchairs, the shopping baskets on the backs of their chairs full, are making their way. But they are not wheeling side by side. She’s in front, leaning back, her hands, I think, folded in her lap. He’s wheeling his own chair and pushing hers with his knees. He cannot take her in his arms and spin her around, can’t carry her across the threshold, can’t even give her his huge strong arm.  But tough as an oak tree, he’s taking them both home, and a week’s worth of groceries for good measure. And damn, he’s singing to her, too.

Tales from a Paris Podcaster: Are There Really Crocodiles in the...