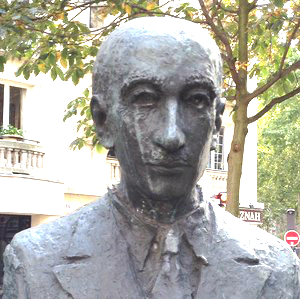 He looks so sad to me, small and shrunken, and worst of all simply passed by. He’s standing there where he always stands, immobile staring ahead, his mouth bemused, perhaps, but not really smiling. I guess he knows that no one is paying attention or, if anyone stops to look at him, no one has any idea who he is or, more to the point, who he used to be. But he would tell you (if only he could) he used to be an important man, respected, influential at least some of the time, even powerful. Yes, he could tell you…

…I was a lawyer, a famous one at that, head of a number of legal associations in my day. A journalist too, I wrote for Le Monde and papers that have long since gone away (like me, more’s the pity), and for half a dozen magazines as well. And don’t forget politics. Yes, I was a friend of Poincaré among others, but also keep in mind that I served on the Paris city council for forty-five years—forty-five, imagine that!—and who else ever did that? I was always elected in the first round too, no run-offs for me. If you didn’t know my name, you didn’t know Paris. There you have me in a nutshell: Alphonse Deville, surely the leading citizen of le quarter Notre-Dame des Champs in the Sixth Arrondissement no less than a man known to every Parisian of every quartier, rich or humble. Alphonse Deville, I used to be…

…who he was, what he used to be. But he can’t because today he is only a bronze statue standing in a little triangle formed by the convergence of three streets at their unpredictable angles—La Place Alphonse Deville, simply a traffic island created not in his honor but as a zone of safety off limits to horses and later to cars, with a bit of greenery, a few benches, and Albert’s statue at the base of the triangle, added many years later. Take away the statue and la place becomes once again un terre-plein.

His statue, even that, may not do him justice if what I’ve learned is true. What you see, if you happen to pass by la place and bother to look at the bronze, is a slight, elderly man, narrow in the shoulder, his head little more than a skull with the skin stretched tight, his arms disproportionately long as if the year-after-year effects of gravity have stretched them like old rope, his ears grown a bit large with age, his coat too long for him, as if he’s wearing a hand-me-down from a former self, the Alphonse Deville that used to be. And, you see, this is not a guess because if you look you can find pictures of him, taken in his prime. A bulldozer, not a man to cross, you’d say. A big head, broad in the forehead and across the cheeks, bullet-headed, fleshy in the neck, a modest goatee and a mustache worthy of an aspiring walrus. If the rest of him was like his head and shoulders (and I haven’t yet found a complete description), Alphonse was a solid citizen in matters of the body and not simply the body politic.

The beard is gone now, and the moustache is just a little muff decorating, but hardly animating or defining, his nose and mouth. There is so little left of likeness, so little suggestion even of a bit of common blood, that I wonder if the fleshy man and the spare one really could be the same, the true Alphonse Deville. But there’s no question about it. A panel separate from the statue tells all, or all that can be told in a few metal words. It’s Alphonse, sure enough, even if down deep neither he nor I can be absolutely sure despite what we know. That would be enough, more than enough I’d say, to make anyone, even the most foolish optimist, sad.

And still there’s more. The sculptor, whether following some evidence that he found and I have not been able to or simply making up the Alphonse he wished to memorialize according to his aesthetic (or political) predilections or the alcoholism of his muse, has subtracted yet more from poor Alphonse—his feet. Bronze Alphonse stands in a bed of ivy, his legs straight as sticks and about as thick and as flexible, evidently simply stuck into the ground, like a manikin mounted on a couple of pushpins or chopsticks. The mustache could change with age and certainly the flesh around his neck could melt or tighten with the years or illness. And yes, it was well known that Alphonse, in his mid forties in 1896, lost his right foot in a railroad accident coming home from the racetrack. But he still had his left one. Is it right to take away a man’s one remaining foot, even many years after his death? It seems a pointless petty theft to me, sheer meanness and smallness of spirit. Why not show him with two feet, a fictional foot in this case hardly doing any harm. And as for falsifying the historical record, who still knows about the amputation after the accident? (We do, but we could promise to keep it between us.)

It truly is sad, Alphonse reduced to the minimum. No longer a man who won election after election, no longer a journalist commanding audiences in half the publications in Paris, no longer the man off for a day or two at the races on the train, no longer the Alphonse that used to be, just no longer at all.

And do you think this is nothing but my sentiment running away with me, just a bit of imagination or fancy to spin a tale out of nothing to pass the time or amuse whoever happens to be passing by, a fiction, a bit of romance, a congeries of parisiana, or  a writer’s conjuring trick, an emotional swindle, or just an extended joke that’s gone on long enough? Don’t you think so, not for a minute. Don’t you dare, not until you come close, right up to the statue, close enough to touch and look Alphonse in the eye, in the right eye. Look at the tear streaming from the corner of his right eye, past his diminished mustache, his tightened mouth, down to his beardless chin, resembling a scar, une balafre, as if the emblem of everything he has lost. He may be a man of metal now, but he doesn’t have a heart of stone. He knows, don’t you see, he knows what he has lost—everything. The sadness is no fiction. The sadness is real. It is his sadness, his alone, completely alone. Of course Alphonse weeps.

[Editorial note by Thierry Picot: There is a very sad joke that Joseph Lestrange is telling here. Poor Alphonse didn’t even get a statue of himself in his place. The sculpture is of course a likeness of François Mauriac.]