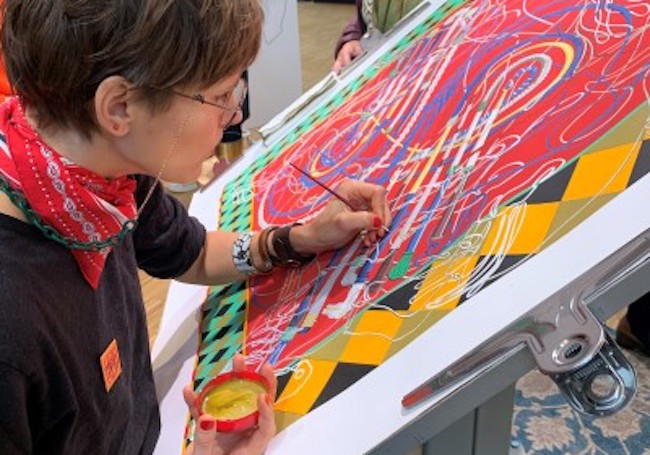 Hermès silk scarves are my sartorial equivalent of Proust’s madeleine, so it is no surprise that yesterday I was amongst the first visitors of the Hermès Carré Club, the week-long event the venerable Maison dedicates to its flagship product, held in Paris for this first time.

Under the glass dome of the Carreau du Temple, the carré is celebrated and reinvented, 82 years since Robert Dumas, husband to fourth-generation heiress Jacqueline Hermès, commissioned the first one. While undoubtedly a marketing event, with unique models produced exclusively for this show, it is also a celebration of the luxury house’s heritage and creativity.

Hermès scarves are a luxury item, an interesting combination of artisanal handicraft and mass production. It all starts with a sketch, prepared by one of the international artists who collaborate with the luxury fashion powerhouse, inspiration often coming from the archives of the Maison. Once approved, the final drawing is transferred on a computer, with a painstaking precision that can involve, for the most intricate motifs, as much as 700 hours of work. The next step is akin to children’s “color by numbers.” At this stage, the designer has little say, leaving the in-house color team to operate their magic. 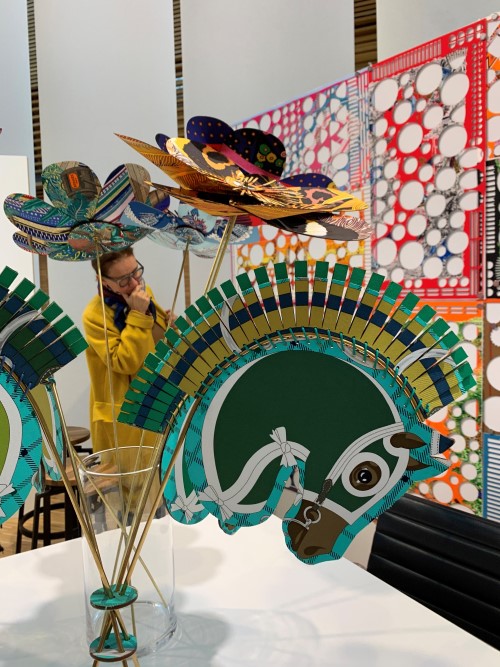 It is indeed the mastery of unusual associations of colors that sets Hermès apart. All silk products are printed in Lyon, France, just like the first one ever made in 1937, using state-of-the-art technology for what remains a very traditional method, silkscreen printing (known in France as la méthode Lyonnaise). Starting from the finesse, a simple black outline on white silk, and applying each successive color (a scarf can include up to 46 different colors!) on a different stencil screen, printing takes place on 150-meter-long production lines, in batches of 100 squares. Once the colors have dried, the scarves are hemmed using Hermès signature French top stitching, as the fabric is rolled by hand from back to front.

While I was there, I had the privilege of talking to two of the creative minds working for Hermès: Virginie Jamin and Elias Kafourous. 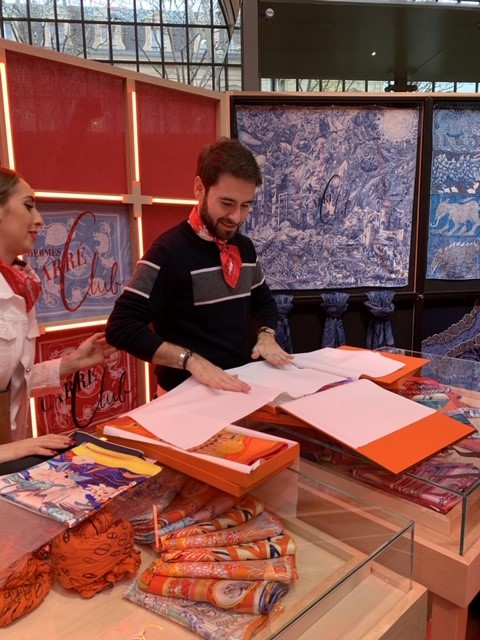 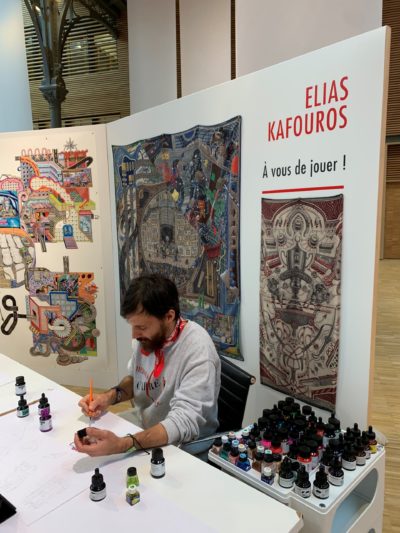 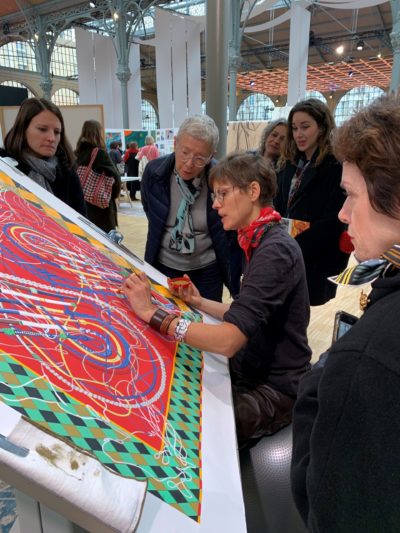 Virginie was busy coloring in an updated version of a best-selling scarf called Fouets et Badines (in English, whips and wands). She poetically described this revision, while patiently coloring in the drawing with the finest of brushstrokes, as “letting the picture continue telling its story”. On another booth, Elias was applying Indian ink to a small sketch of a car, splashes of pink, blue and chartreuse green on a model that could have come straight from a Whacky Races cartoon. Our conversation flew freely, going from cars to how the artistic brain works. Both artists, very different in their style, confirmed that they utterly enjoyed and drew inspiration from the creative interaction with Hermès.

Before leaving this fabulous universe I took a crash course on how to tie the carré in a less traditional way. Amongst the various ways to wear it, I went for a hippy looking, pirate-inspired head scarf. I’m not sure I’ll be able to reproduce it at home but I am certain that even my fashion-forward mum would have approved! 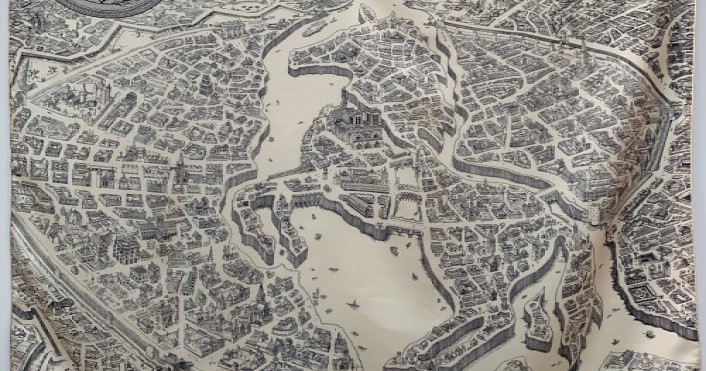