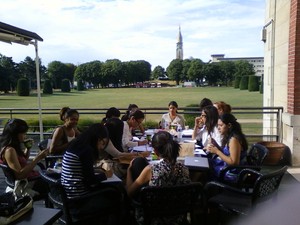 In the 14th arrondissement, at the very center of the southernmost edge of Paris, bordered on the north by the lovely Parc Montsouris, and on the south by the périphérique, is a nearly hundred-year-old institution that many people know nothing about.

But they should. And right now, at a moment when world peace seems frighteningly elusive, is a good time to learn the idealistic—yet real, and highly successful—story of the Cité Internationale Univérsitaire de Paris.

Founded in the aftermath of the First World War, the Cité Univérsitaire is a bold experiment in fostering international understanding, by providing a place for students who have come to Paris from all over the world to study, live, work, and play together on a daily basis. And despite some bumps in the road along the way from then to now, it has been a very successful experiment.

The Cité, which is essentially a campus of residence halls, was the brainchild André Honnorat, the French Minister of Education at the time. He had the idea to create a place that would provide housing for students who had come to Paris to study, a place “where the youth of the world would learn to live together.” With early financial support from the Alsatian industrialist Emile Deutsch de la Meurthe, as well as the support of Paul Apell, Rector of the Paris Academy and President of the Council of the University of Paris, in 1925 the first residence hall, named for Deutsch de la Meurthe, opened its doors to students.

As we all know, peace did not last very long in Europe in the first half of the twentieth century. As the threat of another “great” war grew, many students returned to their homes abroad. After the Germans marched into Paris in 1940, the buildings of the Cité were among those “requisitioned” by the occupying army, and the buildings were used as barracks for German soldiers. Not exactly in keeping with the intentions of the Cité’s creators!

However, it is a testament to the determination of the administrators of the Cité to persist in their mission of promoting peace that after the war, by 1956 a new residence Hall, the Maison Heinrich Heine, was the first postwar German cultural institution to be built in France. A panel near the building explains that this residence was intended from the beginning to be “a privileged center of cultural exchange,” and “a symbol of reconciliation between France and Germany.” 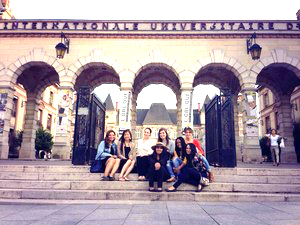 Today the campus offers simple, affordable accommodation for nearly 12,000 students, representing 140 nationalities. Thirty-seven of the forty residence halls are situated on the pleasantly sprawling main campus, on the Blvd. Jourdan. At the main entrance to the campus, across from the Cité Universitaire RER station is a grand, chateau-like International House, built in 1936 with funds provided by John D. Rockefeller Jr. The Center houses a large cafeteria, a small café, a library, a swimming pool, a theater, and other amenities, including a bank.

Many of the buildings, originally donated by various national governments, reflect the architecture and cultures of the donating nations—for example, the Mexican, Greek, Swedish, and Japanese houses. Several of the buildings were designed by world-famous architects, including the Fondation Suisse, and the Maison du Brésil, which were designed by Le Corbusier. The list of former residents is also impressive, with the likes of Aimé Cesaire, Julio Cortazar, Jean-Paul Sartre, and Pierre Trudeau among them.

Throughout the year, the atmosphere is lively, a pleasant mixture of diverse languages and laughter in the air, as students play soccer or tennis, picnic, stroll the grounds engaged in conversation, or lie on the grass reading.

At night the gates are closed, to offer greater security for the residents: but during the day the grounds are open, and guided tours are available for those who would like to learn more about this fascinating “city within a city.” It is a lovely place to stroll, and absorb this living example of what a lovely place our world might be, if only we could find a way to live together in peace.

Janet Hulstrand is a writer, editor and teacher based in Silver Spring, Maryland. She teaches literature classes at Politics & Prose bookstore in Washington, D.C. and Writing from the Heart workshops in France and in the U.S. Each summer she teaches “Paris: A Literary Adventure,” in Paris for the Queens College, CUNY Education Abroad Program. Click on her name to more about her, and to read her essays published by Bonjour Paris.

Biking in Paris: The Scoop on the New Vélibs