Chic or Passé? The Fabulous History of the Humble Handkerchief 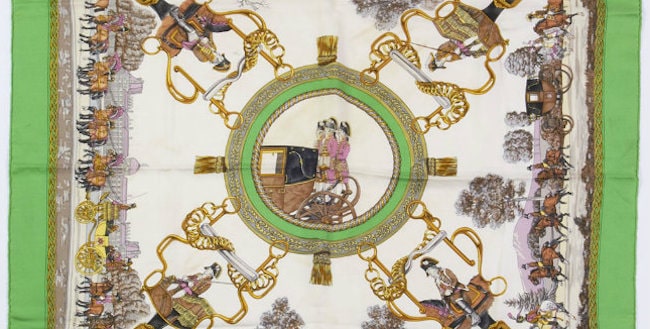 A handkerchief is something we take for granted. Most people don’t use them anymore, either for personal hygiene or as a fashion statement, but at one time they were prized possessions, worth a king’s ransom. The history of the handkerchief is woven through many centuries and countries, most consistently though, through France.

The origin of the word handkerchief can be best explained by stepping back to 2,000 BCE. Wealthy Egyptians were carrying the first handkerchiefs made of bleached white linen. The Kunsthistorisches museum in Vienna has a beautiful limestone stela of Keti and Senet carrying their handkerchiefs. In 1,000 BCE China we see for the first time a piece of cloth used to shield the head from the sun, a wholly practical invention, as evidenced in statuary discovered from this period. The next historical written reference was made by the Roman poet, Catullus in the first century A.D.  A piece of linen cloth was then called a sudarium, from the verb “to sweat.”  Since linen was an expensive, imported fabric, it was used to only wipe sweat from the faces of wealthy Roman citizens and as a token thrown into the arena at the start of gladiatorial contests. In the third century A.D., Emperor Aurelian changed the linen’s name to orarium, denoting their use as exclusive gifts for high ranking officials. When the Roman Empire fell, so did the use of the cloth. 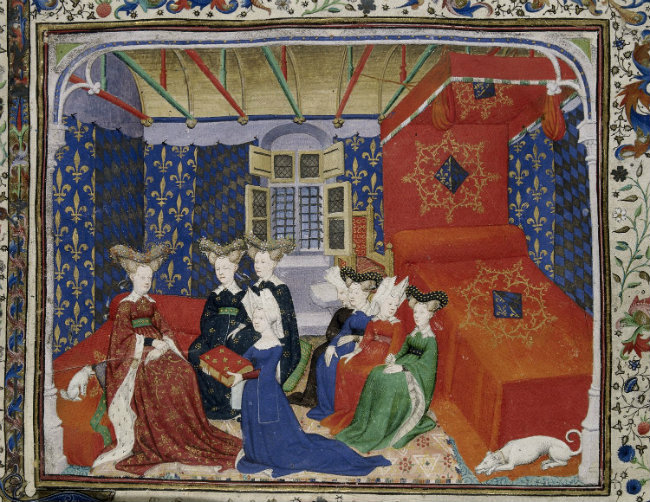 The use of a piece of cloth to cover one’s head resurfaces in The Bible, then doesn’t appear again until the middle of the 13th century, with the appearance of the word couvrechief (courvir—“to cover,” and chef—“head,” in Old French, and keverchef in Middle English. The formal use of the word “handkerchief” evolved in 14th century France. At that time, pieces of cloth were called pleuvoirs from the French verb pleurer— “to cry”, later changed to mouchoir. The English renamed it handkerchief, as in “hand-cover-chief.” The French queen, Isabeau of Bavaria, wife of Charles VI (1385), is noted for purchasing 32 bolts of “Toile de Reims” to be made into handkerchiefs. Charlotte de Savoie, wife of Louis XI (1451), is credited as the first monarch whose handkerchiefs were embroidered with silk and gold threads. These were created in many shapes, including circles and triangles. By the 16th century the use of the handkerchief had spread to Italy, where it was referred to as a fazzoletti. With fabric readily supplied by weavers in France, the fazzoletti soon rose in popularity amongst the Italian elite. 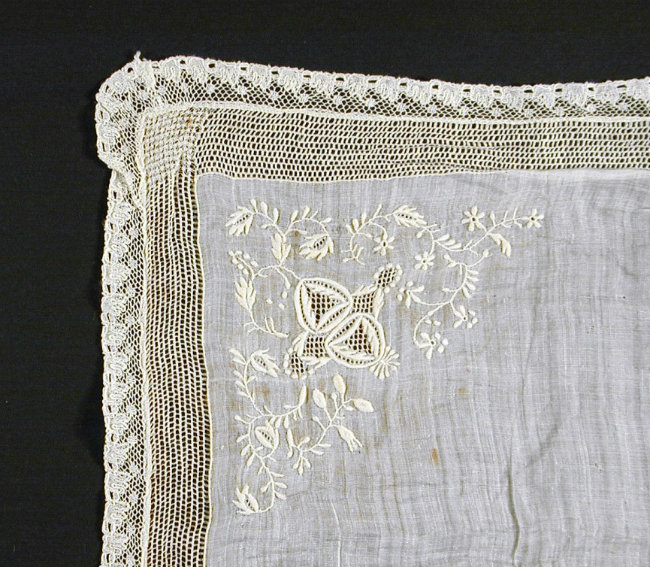 During the Renaissance, Venice was not only the center of origin for some of the greatest paintings in art history, but it was also a mecca for needle-made lace, highly favored by Catherine de Medici. Numerous Renaissance paintings evidence noblewomen holding exquisitely tatted, lace-bordered handkerchiefs. In 1533 Catherine de Medici married Henri II and moved to France. She brought many new fashion styles with her, not only the lace-bordered handkerchiefs, but the scented handkerchief as well. Thereafter, French seamstresses combined silk, gold and silver embroidery with Venetian lace. Ironically, Henri II used these delicate objects to clean his teeth! 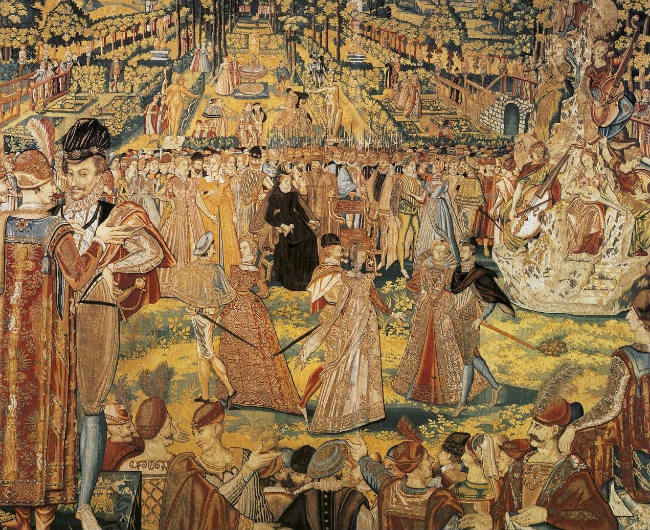 By the end of the 16th century handkerchiefs were so valuable they were bequeathed in wills. Henri IV of France was documented as giving two of his treasured handkerchiefs to his mistress, Gabrielle d’Estrées in 1594, and then pressing for their return upon her death. Since the French seem to hold the copyright on the notion of love and romance, it’s not surprising the handkerchief became an accessory for flirtations and illicit liaisons.  Soldiers used to keep their ladies’ handkerchiefs under their helmets when they went off to war. This idea of the love token crossed the Channel to England at the turn of the 17th century. Shakespeare contrived a misunderstanding over the loss of a handkerchief as a premise for murder and suicide in 1603 in the creation of The Tragedy of Othello. 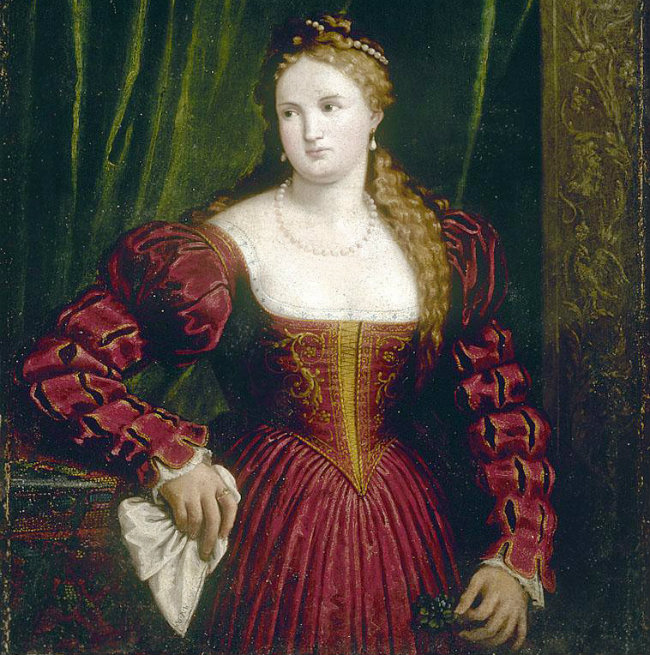 The English democratized the use of the handkerchief, making it available to every socio-economic class, and by the end of the 17th century almost everyone in western Europe could be found using a handkerchief. During the 18th century the fashionable accessory crossed the Atlantic to the thirteen colonies. Fighting alongside George Washington during the Battle of Rhode Island in the Revolutionary War, the Marquis de Lafayette was famously greeted by 200 young women waving white handkerchiefs. And legend has it that Marie Antoinette complained to her husband, Louis XVI, that her handkerchiefs were too large to be fashionable, so, in 1785 he decreed that they be made with lengths equal to their widths, in dimensions of either 10×10 or 11.5×11.5 inches, sizes that are still used today. 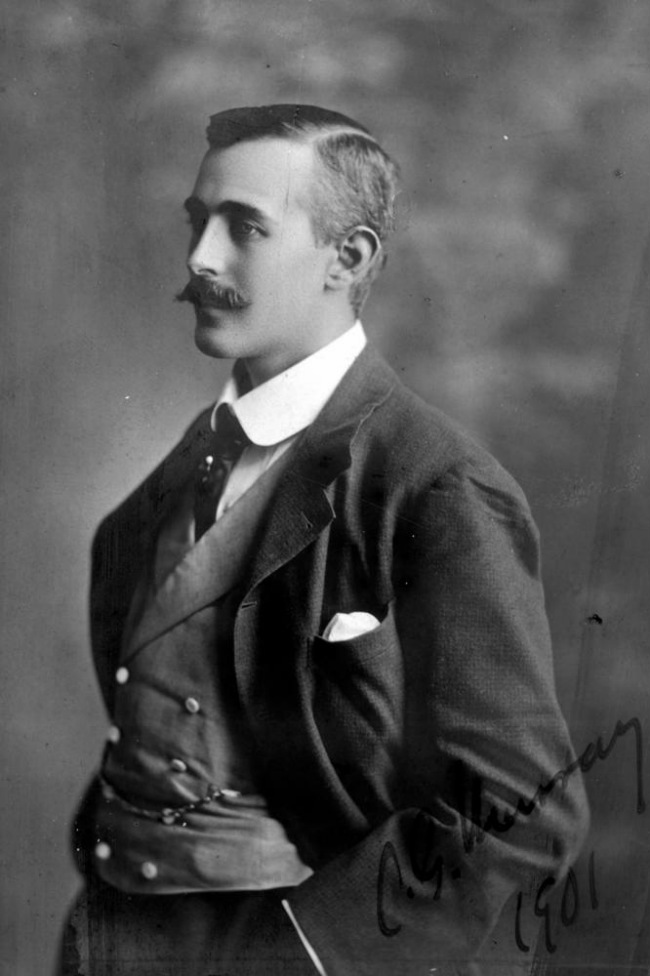 Prior to making their move to the breast pockets of men’s suits and sport coats, handkerchiefs were kept in pants pockets. It was then viewed as a major breech of etiquette to expose a used handkerchief in public. Women of the day kept them in purses, stuffed down their brassieres or rolled up in their sleeves. The handkerchief didn’t turn into the more popular pocket square until two-piece suits came into fashion during the 19th century. Thereafter, no “gentleman” was seen without one.

The handkerchief continued to be a fashion statement for both men and women until the beginning of the 20th century. In 1924, the makers of Kleenex sounded the handkerchief’s death knell with their advertising slogan, “Don’t Carry a Cold in Your Pocket.” Despite this admonition, French designers persisted, and in 1937, the renowned French company Hermès introduced a line of limited edition, silk handkerchiefs and kerchiefs with hand-rolled edges, some of which have since become collector’s items.

Over the years I have put together my own collection from frequenting vide-greniers (empty-attic sales) and Paris’s marchés aux puces (flea markets) among other venues. My most prized possession, worth a king’s ransom to me, is the handmade lace handkerchief that my maternal grandmother carried on her wedding day. 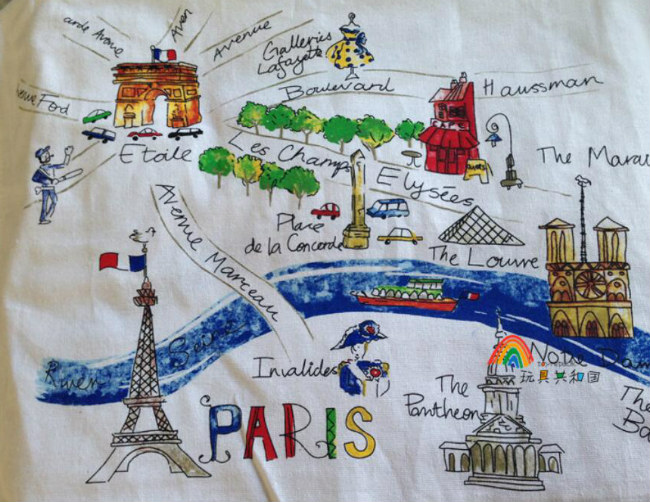