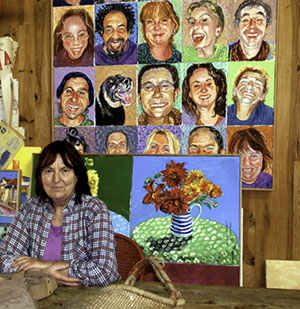 I first met Peggy Kluck, at the Café Divan in Eauze, (capital of the Armagnac region) seated with someone I already knew. We had a spirited conversation about life in my newly adopted country. Quick witted and direct, Peggy embodied the typical characteristics of a red head. As I rose to leave, Peggy said, “You have to come to my house to see my art! Call me. I’m a wonderful painter.” With that, she handed me her card. Unfortunately, I never found the time to visit her.

I didn’t see Peggy again until the following year. She was seated at a café in the village of Aignan, about a half hours drive from Eauze, enjoying the hubbub of passersby at a Sunday morning vide-grenier (flea market). I re-introduced myself to her, then she introduced me to her son, the owner of the café, after he placed a steaming hot cup of coffee in front of her. “You never came to see me!”, she reprimanded politely. “I’m sorry, I will,” I responded, “I still have your card.” Friends of Peggy arrived to join her and I ducked inside her son’s café. The café was dark, but inviting. Not only does he offer organic coffees, teas and light lunches, he sells brocante (second hand goods and antiques). I wandered around looking at all of the displays. A painting next to the coffee bar caught my eye – a still life of a kitchen table just after breakfast. A vase full of pink gladiolas sat on a checkered tablecloth, a dish towel hung off the table, an open box of sugar off to the right next to a plate of half eaten pears. The scene was simple, the colors captivating. I was happy just standing there looking at it. Peggy’s son saw me mesmerized by the painting and said, “That’s my mother’s painting.” I looked outside at Peggy, surrounded by a coterie of friends, and knew I had to know who this unpretentious woman was. 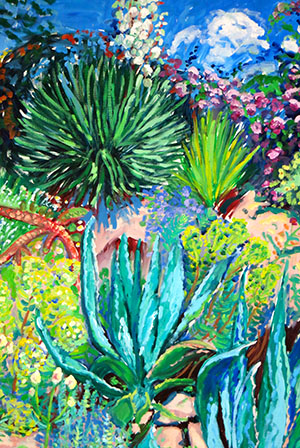 The following week I called Peggy and made a date to visit her at her home in the tiny village of Cravencères. After the village proper, I turned left at a hand-lettered sign – Peggy Kluck’s Atelier – and drove up a winding road to a her house and studio. Peggy lives on a magical 3 hectare piece of property at the top of a hill. She greeted me warmly and took me on a tour of the grounds first. Over the 20 years Peggy has lived there, she has created many different environments to paint from. I sensed a fluidity of purpose as I walked from flower garden to vegetable garden to succulent/cactus garden to orchard to another flower garden, down through the forest past wild cyclamen to a lake at the bottom of the hill. While walking back up to the house Peggy told me that when she first bought the property there was a ruin of a house and an old barn. The barn became the perfect atelier, but the gardens came first – and I could see why. Inside Peggy’s house, which is completely handcrafted, I was immediately bombarded by a riot of vibrant colors contrasting beautifully with the golden wood structure. Her paintings are on every wall – paintings of the gardens outside and scenes from her daily life. The atelier, itself, is a light filled artist’s dream. A suitcase filled with well used paint tubes, a palette, easel and chair are gathered in the center of the room. Books and paintings are stacked against the walls and a comfortable sofa fill the rest of the space.

Over coffee I learned what makes this highly skilled, low key woman tick. Peggy was born in 1941 in Appeldorn, a town in the center of the Netherlands. As a child drawing was second nature to her. She thought it was normal and that everyone had that talent. She took art lessons as a teenager and eventually studied art at school when she was 23, winning awards from the school and her village. She tried all different kinds of styles and decided she wasn’t interested in any. She loved Van Gogh and Soutine. However, she didn’t think her art had value because it came too easy for her. 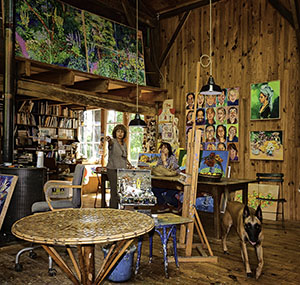 Instead of pursuing a career as a painter, she married and had 3 children. The 60’s era of peace, love and freedom came to the Netherlands and it tugged at a longing in her for a simpler life, so she and her family joined a commune. By the time she was 30, along with her family, she embarked on a world tour to determine where they wanted to live. The Netherlands didn’t hold any attraction for them anymore and eventually they chose France as the perfect country. From the Cote d’Azur Peggy moved to the small village of Lupiac in the Gers départment, famous as the birthplace of D’Artagnan of The Three Musketeers fame. In Lupiac, Peggy became a goat farmer, learning the trade from the locals. By then she had a new husband and her first painting studio in a caravan on the property. After her second marriage ended she bought the property in Cravencères and hasn’t stopped painting since. Her philosophy of art is like her philosophy of life. She says, “I am a simple painter. I want to paint my happy paintings, I want to harm no one and if it doesn’t come natural to me, I don’t do it, no matter what it is.” Then Peggy confides in me, “I’ve had so much sorrow in my life, I just want to paint. With painting I come back to myself.” And indeed, she does, over and over again, healing herself with each beautiful canvas.

Peggy Kluck can be reached at this email address [1].