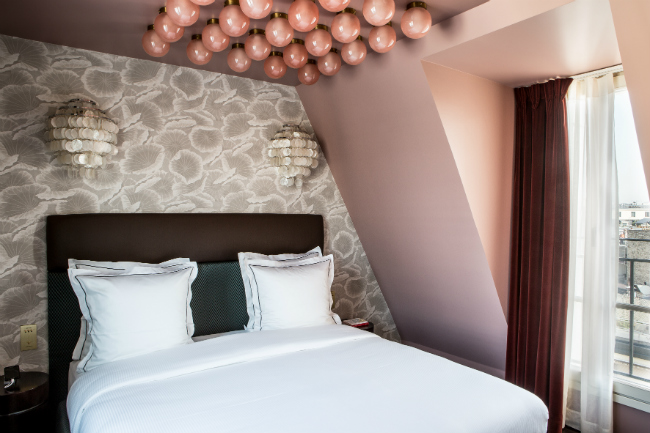 French hotel group Esprit de France has added to its collection of Paris hotels with not one but two new openings this year, each with their own unique charm to offer a memorable stay in the City of Light.

The first to open its doors earlier this summer, L’Hôtel du Rond Point des Champs Elysées is just a stone’s throw from the famous avenue and close to the Grand Palais, Petit Palais and the haute couture fashion houses of the Avenue Montaigne.

Belonging to the Vuitton family since the late 19th century, the hotel’s layout and façade were modified in the early 1920s. With Espirit de France deciding that both of the new launches should retain their own personality, design team Dimore Studio has respectfully renovated the Parisian townhouse, preserving the historical Art Deco style features. 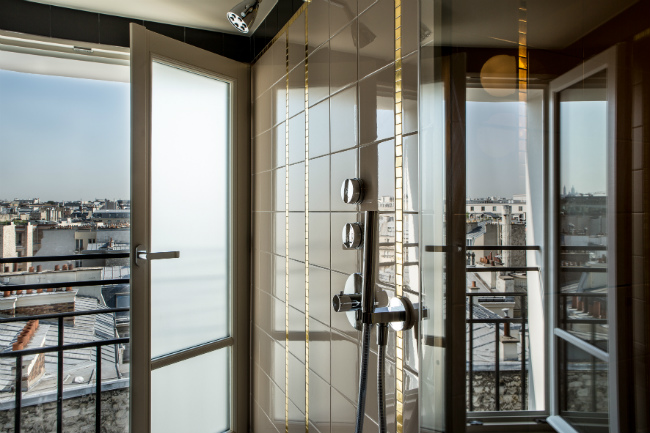 On the façade, the cut stone has been restored to its original glory, with Siennese yellow marble and a rich green marble from the Alps. The Art Deco canopy at the entrance has also been fully renovated, and crowns the hotel’s 1920s inspired sign.

Inside the hotel boasts striking architectural features, such as the period glass ceiling above the breakfast room, with the addition of contemporary updates. Warren Platner’s iconic chairs, which can be found in the hotel’s bar, have been given an new lease of life with leopard print fabrics, making an unusual but fun departure from the hotel’s typically Art Deco design. 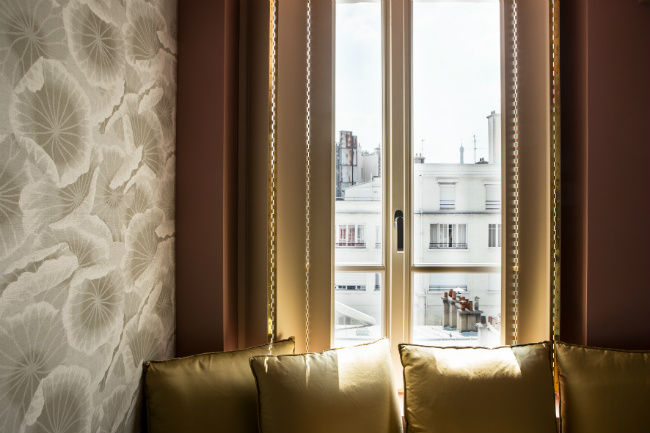 Inside the rooms, powder pink shakes off its millennial associations and provides the basis of a more grown up color palette when paired with rich mahogany wood and sophisticated shades of emerald green. The vertical striped walls make a striking backdrop in each room for an eclectic but elegant mix of shapes and textures, with spherical and sculptural light fittings, bold geometric carpets and a selection of fine linens and softs velvets.

To add the finishing touches, Dimore Studio has also drawn inspiration from various 1920s trends. The furniture has been custom-made to recall the luxury of the era’s transatlantic cruises with Art Deco curves, while the bedside lamps are inspired by the Bauhaus movement. Printed headboards and bed bases are cheekily based on erotic illustrations from the 20s. The bathrooms are also a nod to 1920s design, with the layout inspired by the mosaics and tiling dating from this decade. In contrast to the more colorful bedrooms, the palette is a simple and elegant combination of cream and black, which shows off beautifully the renovated golden mosaics. 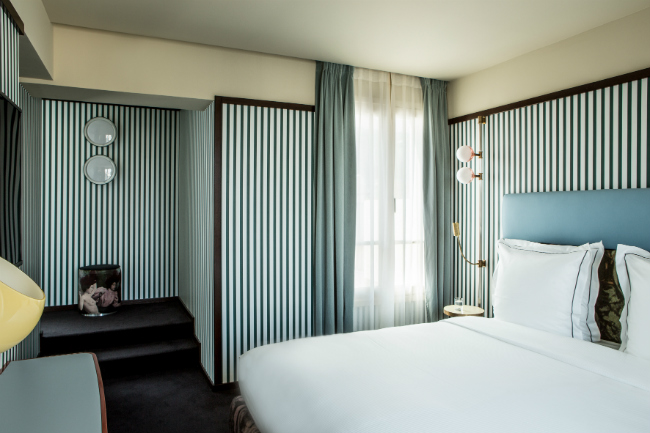 For those who also like their room with a view, make sure to request a stay on the 7th and 8th floors for vistas over the city’s grey rooftops, and with the Eiffel Tower and Sacré-Cœur on either side. 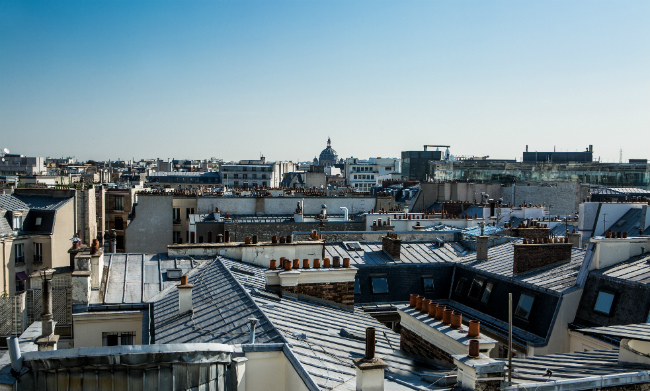 From the heady heights of the top floor, head downstairs to the hotel’s spa area. Although Parisian boutique hotels are often known more for their style than their space, the newly-built 13-meter swimming pool is just long enough for a leisurely swim, with the area also large enough for a traditional Turkish bath and lounge chairs to relax. Misty colored tiles and serene lighting set the scene for relaxation, and for those who desire more privacy, the space can also be privatized. 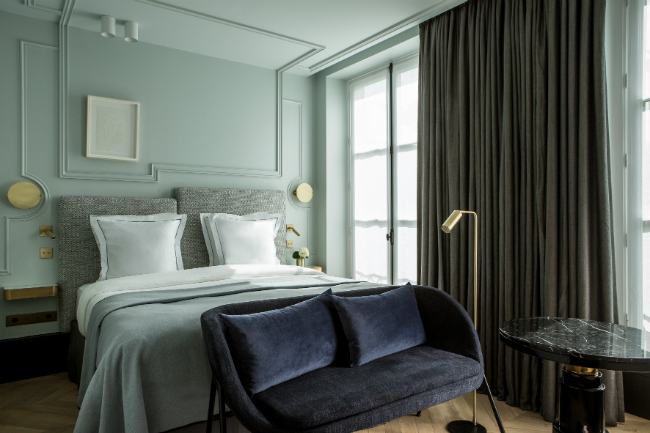 Offering an even more private and intimate stay is La Maison Armance, due to open mid-October. Once the home of French writer Stendhal in the early 19th century, and named after his very first novel Armance, the Maison Armance is a secret residence tucked away on the legendary Rue Cambon.

To find the hidden hotel, which is not visible from the street, guests must push open the the old coachman’s door of number 5 rue Cambon, passing through a wide porch which leads onto a peaceful cobblestone courtyard and the hotel’s entrance. 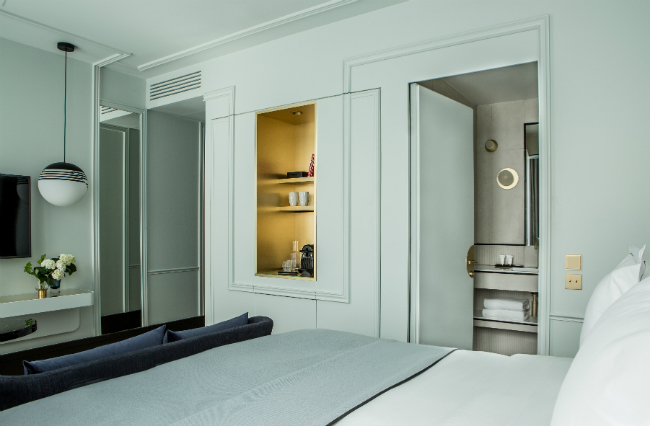 With the main philosophy of Maison Armance being intimacy, once inside guests will feel even more secluded, with the unusual design of the hotel placing it far away from the streets of Paris. The reception area is found surprisingly in the top floor attic space, along with a breakfast room, honesty bar, and lounge area, with creative studio Double G recreating all the charm and comforts of a private Parisian apartment.

The homely feel continues throughout the hotel. With just 20 rooms located between the 3rd and 5th floors, Maison Armance is one of the smallest and most exclusive hotels in Paris. Inspired by the heights of the hotel, Double G has created a color palette which recreates the Parisian sky and iconic rooftops with shades of storm grey, zinc, brick and an elegant deep night blue. The décor takes its cues from the classic Haussmannian apartment, and while more classic than Hotel du Rond Point, still has its own unique details. 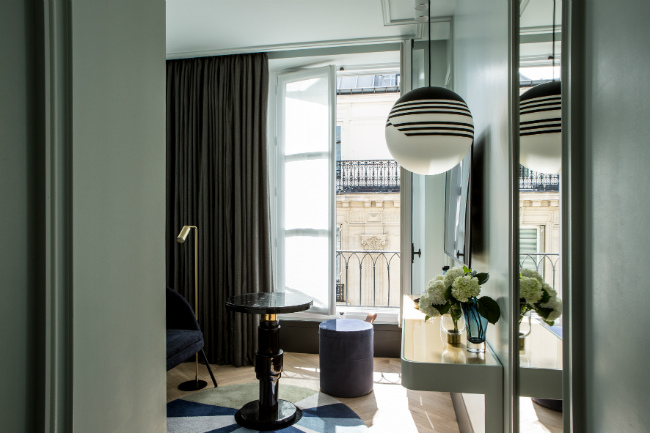 The furniture has once again been custom-made and adds a contemporary, almost sculptural feature to each room, while the addition of fabrics such as tweed, soft linens, and rich velvet add softness and create a cocoon-like effect, allowing guests to enjoy the “head in the clouds” city views while ensconced in the luxury of their very private room. 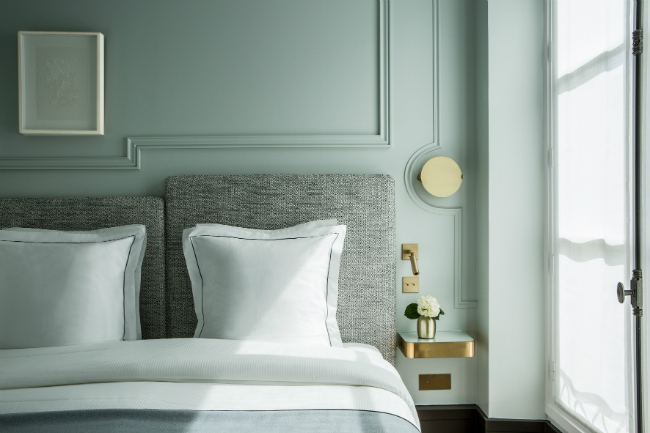 Previous Article Murder and Mystery in Paris: Henri-Désiré Landru, the Paris Bluebeard
Next Article A Rollicking Night of the Pulitzers Caps the Festival America