Home History The Staff of Life

Since Roman times the area known as the Beauce Plain, a flat, fertile, treeless expanse of open country southwest of Paris served as the granary for this burgeoning metropolis.  The life and longevity of the city of lights owes everything to the wheat and cereal grains grown there. The stained glass windows of Notre Dame were paid for by donations of the baker’s guild. 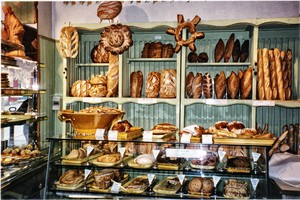 Historically, bread was “invented” around 10,000 b.c. and evolved according to custom and local grain. The first breads were cooked on heated stones. In 5,000 b.c. the Egyptians created the first leavened (fermented) breads.  By the first century, the use of bread as an essential part of the diet spread to Spain and was eventually adapted by the Gauls. But, it wasn’t until the Middle Ages that bread became the staple of the French diet.  The first loaves were crude and heavy.  Because salt was expensive, the bread was unsalted. It was an acquired taste, but nonetheless a dietary mainstay. During the 17th century a method of removing bran from from wheat was developed, making the production of the first white breads possible.  Throughout the reign of Louis XIV, white bread baked from refined flour became a status symbol of nobility.  Whole meal breads made from whole grains and cereals were relegated to the servants, the poor, and the dogs.  Those who couldn’t even afford the whole meal breads, bought “biscuits” made from the previous day’s bread, re-baked to keep it dry. 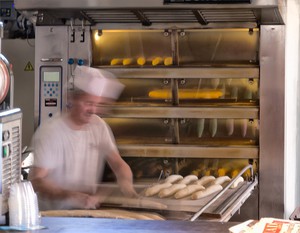 However, the baking of bread largely remained a home-based function until the Industrial Revolution, though some large villages boasted artisanal bakeries or boulangeries, named after the boules (round loaves) produced. Just as the French assimilated the croissant into their own cultural lexicon of cuisine (it actually originates from Budapest with a nod to the crescent moon on the Turkish flag), they’ve done so with the baguette, which came from Vienna in the 19th century. The first steam oven was brought to Paris by the secretary of the Austrian Embassy, August Zang.  The steam oven is a combination of a gas fired traditional oven and a brick oven.  The injection of steam allowed the crust of bread to expand before setting, creating a lighter, airier loaf. Coincidentally, at the same time, a law preventing bakers from baking bread before 4 in the morning made it impossible to make boules in time for their customers’ breakfasts.  A slender loaf of bread called a “baguette” (stick) could be prepared with the aid of the newly-invented kneading machine, and baked more rapidly.  Bakers capitalized on their good fortune.  Because baguettes were only made with flour, yeast, salt and water and to this day remain preservative-free, they only stayed fresh a few hours, requiring customers to visit the bakery two or three times a day. 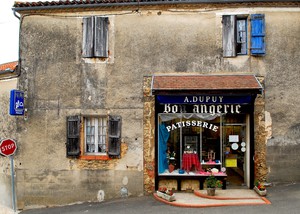 By law, every village in France, must have a bakery selling bread.  If there is no bakery in a village, a store, house or sometimes even the post office, will display a “depot de pain” sign, signifying that the bread is brought in and sold from somewhere else.  The ingredients of baguette dough are also defined by law.  A standard of size and shape exist, as well. A typical baguette is 2 inches wide and 26 inches long. The best baguettes use soft wheat flour and have a crisp, golden crust with raised score marks when baked.  The interior should be a light cream color and have the delicate taste of almonds and warm milk. All of the senses are utilized when buying the perfect baguette– you can see its golden brown color, you can smell its delicate yeast scent, you can feel its texture on your tongue, you can taste its magical flavor, and you can even hear the hollow sound it makes when tapped, indicating its having been baked to perfection. The language of bread is sacrosanct to the French and has even been translated into a marvelous film by Marcel Pagnol entitled, “The Baker’s Wife.” It is the story of a baker newly-arrived in a Provençal village who weds a young wife shortly after settling down into the rhythm of local life.  She becomes bored and looks for excitement, soon running away with a handsome shepherd. The baker becomes so depressed he can’t bake bread.  The villagers get angry because they don’t have bread and selfishly concoct a plan to kidnap her and bring her back to the bakery.  If you haven’t seen this classic film you’ve missed something very special.

10 million baguettes are sold every day.