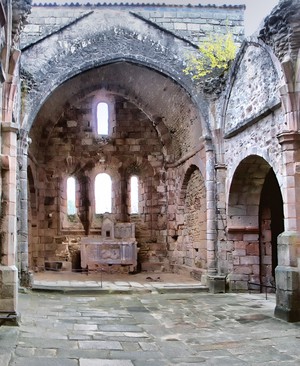 Oradour-sur-Glane was a thriving community tucked into the bucolic landscape of the central France in the Limousin region of the Haute-Vienne department, fifteen miles west of Limoges.  Its villagers rejoiced in the allied landing at Normandy on June 5, 1944.  However, five days later, a regiment of Nazi soldiers walked into their idyllic hamlet and systematically massacred 190 men, 247 women and 205 children.  Only 5 men and 1 woman survived. 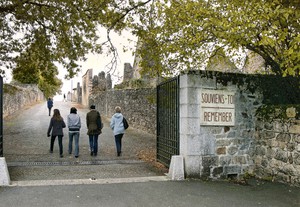 The whispering of falling rain, like the spirits of the dead, were the only sounds I heard as I walked through Oradour, one of the most powerful war memorials in France.  I entered the memorial through the rust and concrete underground museum, the Centre de la Mémoire, which provided a somber socio-political explanation of the horror that happened here.  A busload of French school children had also made a pilgrimage here and I lingered behind their hushed comments while trying to listen to an English audio-guide translation.

On the morning of June 10, 1944, S.S. troops entered the village of Oradour-sur-Glane, a mistake made by the German General commandeering his men. French resistance fighters were thought to have captured a German soldier in another village just 20 kilometers south, called Oradour-sur-Vayres, but the General seized upon the first part of the name and the first village he came to. All of the townspeople were escorted to the local fairgrounds under the pretense of verifying their identities.  Under armed guard the men were led into barns partially filled with straw, grenades were thrown in, and the doors were tightly secured. Some men managed to escape only to be gunned down.  The women and children were forced into the church, explosives were thrown in and the doors were tightly secured.  The ensuing firestorm ravaged the entire village. 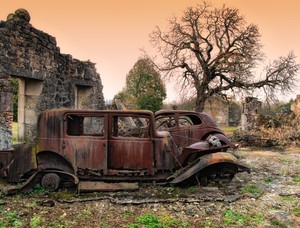 When General Charles de Gaulle visited Oradour-sur-Glane following the armistice, he set in motion the eventual preservation of the village exactly as it was left.  It stands today, walls broken, cars burned, sewing machines scorched, cooking pots rusted, as a ghost town.  As one survivor said, “It is dedicated to all those who down through the centuries and throughout the world has suffered intolerance, hatred and violence at the hands of other men.”

Souviens-toi.  Remember. How could we forget?