Mystery and Murder in Paris: The Infamous Madame de Brinvilliers 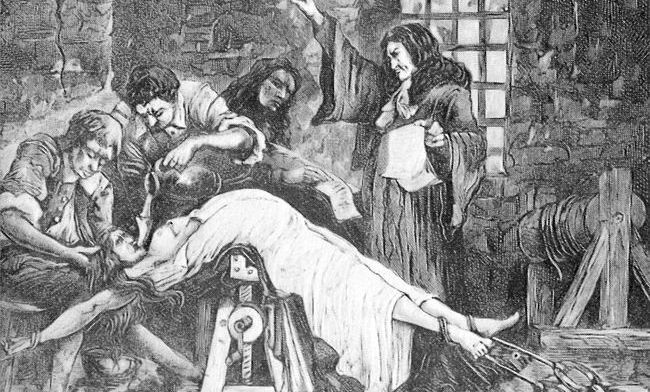 Poison and water boarding in the 17th Century

On July 17th, 1676 Marie Madeleine Marguerite D’Aubray, Marquise de Brinvilliers, was tortured and forced to drink 16 pints of water, after which, (perhaps unsurprisingly!) she confessed to a series of crimes, the main being the poisoning of her father and two brothers for financial gain.

If this was not bad enough, it seems almost certain that Madame de Brinvilliers, in a macabre practice run, poisoned around 50 poor people either in hospitals or under the auspices of her ‘charity’ work amongst the underprivileged.

She was born in Paris in 1630, the daughter of Dreux d’Aubray, a civil lieutenant of Paris. The family was wealthy, noble and well known, and Marie was described as pretty with an endearing air of childlike innocence. This ‘childlike innocence’ contradicts other reports that she had been sexually abused at the age of seven and had an incestuous relationship with one of her brothers when she was ten years old.

When she was 21, she married Antoine-Gobelin, Marquis de Brinvilliers. Although her dowry was not insubstantial and her husband, a commanding officer of a regiment, was well set up financially, this was a temporary state of affairs. The Marquis was an inveterate gambler and he was soon in debt.

Their marriage was a very ‘open’ one, both having affairs but it wasn’t until Marie was introduced to Jean Baptiste Godin de Sainte-Croix that she blatantly and scandalously flouted their affair, lavishing her own money on Sainte-Croix to finance their extravagant lifestyles. Her husband by then had fled France to escape his creditors. Marie’s father, dismayed by the scandal his errant daughter was causing, effected a ‘lettre de cachet’ signed by the King, and Sainte-Croix was arrested and spent a year in the Bastille.

And it is here that the story really begins. Sainte-Croix’s cell mate was a certain Exili, an Italian poisoner, who shared his knowledge of poisons with Sainte-Croix. On his release, Sainte-Croix plotted with Marie not only the poisoning of her father, Dreux d’Aubray, but also her siblings.

The poison she used was arsenic based and was reputed to have been invented by Giuila Tofana, an infamous Italian poisoner and was consequently known as Acqua Tofana.

(Giulia Tofana was a professional poisoner. Described as beautiful, she had from an early age spent her time in apothecaries, eventually developing her own poison. She could well have been the first extreme feminist as she sold her poisons to women with abusive husbands and when arrested in a church in Rome and tortured, confessed to killing 600 men with her poison. Tofana was executed in 1659. It is always possible however, that Giuila was passed down the Tofana recipe from her mother who was executed in Palermo, in 1635, accused of murdering her husband.)

Marie and Sainte-Croix’s original plan was just to poison Marie’s father, Dreux d’Aubray. It was now that Marie set up her own small laboratory experimenting with strengths and dosages of arsenic and probably mercury, testing them on her maid and the sick in the nearby Hotel de Dieu. For eight months Marie remained with her father on his estate, cooking for him and acting as the doting daughter administering small doses of the poison, hoping the results would be undetectable. When Dreux d’Aubray died in September 1666, the cause of death was recorded as natural and no autopsy was performed.

However sharing her inheritance with her two brothers and sister did not make Marie as rich as she had envisioned. Her next step was by now predictable but was to cause her eventual downfall. She hired a young man, nicknamed La Chausée, and placing him in the household of her younger brother, paid him handsomely to continue her work. Both brothers had their food laced with poison by La Chausée, the first dying on July 17th 1670, and the second three weeks later. Although traces of arsenic were found in the autopsies, Marie was not formally a suspect because being in Paris at the time of their deaths provided her with the perfect alibi. 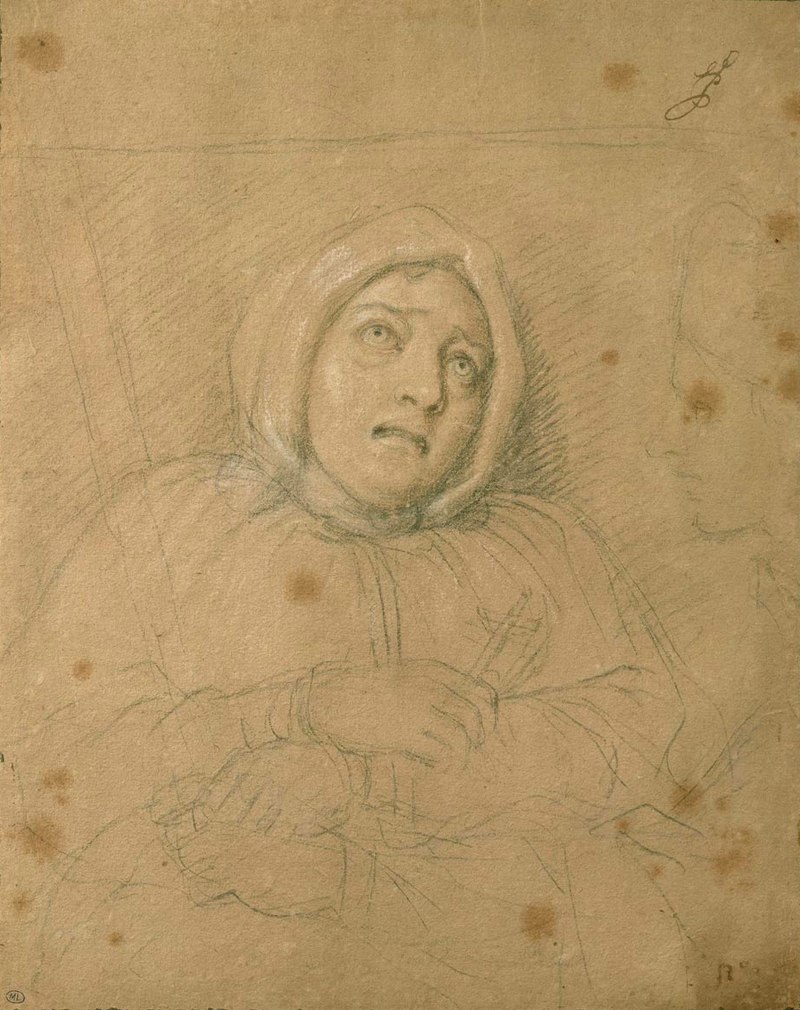 Her remaining sister, understandably, had all her food tested for poison before she consumed a mouthful.

Sainte-Croix, who had not yet benefited from Marie’s inheritance and now financially ruined, had kept a detailed diary of Marie’s exploits, her love letters to him, two promissory notes from her and the final, ironical nail in her coffin, vials of the poison they had used to murder both her father and her brothers. These were left in a box with the damning note. “To be opened in the event of death prior to that of Madame de Brinvilliers.”

Of course the sudden death of Sainte-Croix had been unexpected– the common belief was that he was still experimenting with poisonous gases and had fatally inhaled the fumes by accident, and Marie could not have foreseen the consequences both of Sainte-Croix leaving no will and the incriminating box being opened on his demise.

La Chausée was soon arrested and confessed to everything under torture before being sentenced to death.

Marie-Madeleine Marguerite d’Aubray, Marquise de Brinvilliers, had already fled to England and thence to the Netherlands, trying to avoid extradition, but was finally arrested and returned to Paris to stand trial on April 29th, 1676.

On July 17th, 1676, Madame de Brinvilliers was executed in the Place de Grève (now the Place de l’Hôtel de Ville). She was beheaded and then thrown onto a pyre before her remains were thrown into the Seine.

It was recorded that Marie, dressed only in a shirt and hood, and watched by a huge, excited crowd of onlookers, had climbed the scaffold with great dignity and courage.

However, Madame de Brinvillier’s death was not in the least the end of French scandals involving poison. It was only the beginning. What was to follow in 1677-1682 was not only to completely eclipse Marie’s crimes, but also to cause a scandal involving prominent members of the aristocracy that reverberated into the very heart of the court of King Louis XIV.

The notoriety of Madame de Brinvillier’s trial and execution sent shivers of suspicion throughout the nobility; other suspicious deaths were questioned and rumors of poisoning spread like wildfire. The King himself became alarmed and forced some of his servants to be his tasters.

When Magdelaine de La Grange was arrested on charges of forgery and murder in 1677, she immediately appealed to the Marquis of Louvois claiming she had information of other crimes of great importance. Louvois reported directly to King Louis and to the chief of police. The subsequent investigations lead to numerous accusations of murder, witchcraft and black masses.

Fortune tellers and alchemists were rounded up, those suspected of selling what was popularly known as ‘inheritance powders’ were tortured into divulging the names of their clients who had bought poison either for their husbands or to rid themselves of rivals in the Royal Court.

The midwife Catherine Deshayes Monvoisin, commonly known as La Voisin, when arrested in 1679, implicated numerous members of the Royal Court. These included the Comtesse de Soissons and her sister the Duchesse de Bouillon, the Duke of Luxembourg and perhaps the most troubling of all, Athenais de Montesan, the King’s mistress.

La Voisin claimed that de Montesan purchased aphrodisiacs and performed Black Masses in order to keep the king’s favors over other rivals in Court.

King Louis, not wanting to risk more publicity about the scandal which reached into the very heart of his Royal Court, abolished the court in 1682.

The police chief Reynie, stated on the abolishment of the court, “the enormity of their crimes proved their safeguard.”

Marie-Madeleine de Brinvillier’s crimes of simple greed had more far reaching consequences than she or the Court of King Louis could ever have imagined.

Flâneries in Paris: Explore Saint-Michel and the Latin Quarter

The Death of the Paris Metro Ticket