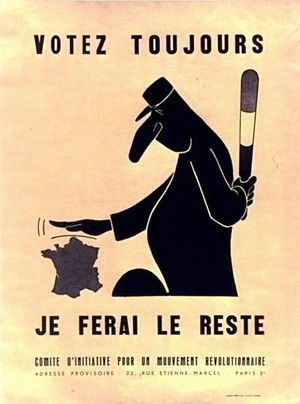 Origins of the movement

The social movement that shook so many countries in Europe, South America, Japan and, of course the US, in the spring of 1968, swept over France like a wildfire.  If it grew from a collective uneasiness within the university system and modelled both after the University of Berkeley’s 1964 Free Speech movement and the protestation against the war in Vietnam, it also took on a totally different character typically French.  The student revolt that began in the suburbs northwest of Paris also revealed a much more general crisis that nearly toppled the State at its highest level and, in an explosion of freedom of expression, would deeply change the university, but also the social and political face of France, for decades to come

The first incidents began on the Nanterre campus.  Created in 1963, the new  ampus was intended to absorb the overflow of students from the overcrowded amphitheatres in the Latin Quarter’s Sorbonne campus. Located in what is today “La Défense”, a Tower studded business center, in n 1968 it was isolated and surrounded by a huge shanty town grown out of the influx of thousands of French Algerians or “pieds noirs” (black feet), having fled to France after Algeria won her independence in 1962.

After months of fruitless negotiation concerning government stands, and an incident in which left-wing student leader Daniel Cohn-Bendit broke into the Dean’s office, the President of the University suspended classes at Nanterre on May 2nd.  Students at the Sorbonne began protesting and the next day, 3,000 State Police descended on the Latin Quarter “emptying” the courtyard with their batons leaving 100 injured and another 596 students under arrest. 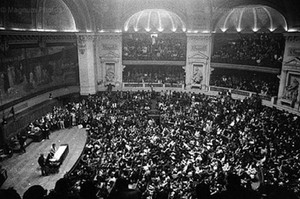 Student occupation of the Sorbonne’s main amphitheatre and debate, May ‘68

In a country where, after the post war boom, unemployment was rampant and jobs, even for the “educated “young, still scarcer, the Nanterre revolt was intended to defy the country’s President, Charles de Gaulle, into modernizing and democratizing France’s elitist educational system, while protesting against the ongoing US war support for a corrupt South Vietnamese government in a former French colony.   But before the government had time to realize what was happening, the student protest soon broadened to include a number of other major economic and social demands.

In a culture used to avoiding eye contact on buses and dependant on its trade unions to call up strikes and organize negotiations, it’s still amazing how students and workers were able to awkwardly join hands in a common cause considering the immense culture gap that separated their two worlds.  Most of the intellectual core didn’t even belong to a union.

Impossible to speak about May ’68 without mentioning France’s State Police, the CRS or Compagnie Républicaine de Sécurité.  Created in 1944 to replace the GMR  (Groupes Mobiles de Réserve)  sadly remembered for their zealous attitude in hunting down resistance fighters and rounding up Jewish families to be shipped off to the camps during World War II, tourists to Paris will still find CRS patrolling the métro and train stations, Embassies and other public buildings that require surveillance. 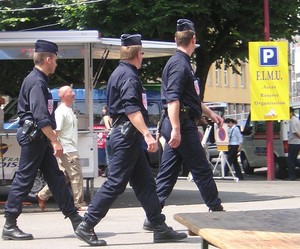 More or less equivalent of the US National Guard, their role is to intervene during natural catastrophes and potential riot situations, but, unlike their colleagues the Gendarmes or the US National Guard, they are not military personnel.  Some of us are convinced today that a part of the unnecessary violence the CRS exhibited in 1968 was due to the stress of long hours, and sometimes days, cooped up  to in overheated buses, playing “tarot” and waiting for the government to give them their signal to finally “step into action. 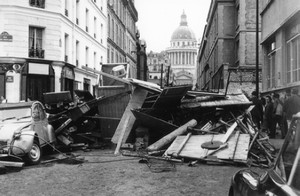 May ’68 barricade d’Ulm,in front of the Ecole Normale Supérieure

The Day the Earth Stood Still

After the closing of Nanterre, the student reaction was immediate. On May 6th over 20,000 students and teachers marched on the Sorbonne.  Because the protest rally was officially illegal, it was again violently repressed and, when students began defending themselves by throwing objects at the police, set off a first night of riots in the Latin Quarter.  In the 19th century Commune tradition, barricades were soon piled high with paving stones, overturned cars, trees, grills and whatever else was at hand.  By the end of this first evening 100 more students and teachers found themselves behind bars.

CRS or no CRS the University movement continued to grow.  On May 9th some 30,000 students and their supporters gathered at the Tomb of the Unknown Soldier, under the Arc de Triumph, to sing the French national anthem, La Marseillaise. The following day, the government reacted to the provocation by officially shutting down the universities.  By the evening of May 10th the Latin Quarter would become a battlefield.  Over 60 barricades blocked the streets, 60 cars were set ablaze and another 188 vehicles were damaged in one evening.  Of the 367 people hospitalized that night 251 were police.  Another 726 persons, among them both journalists covering the event and simple bystanders, were injured.  This time 468 “students” — not all of the participants were students, some were, it’s true, self-proclaimed “anarchists” from outside the city come to “support” the revolt — were arrested.  The students’ determination impressed the trade unions who weren’t used to using violence to get their points across.

When I arrived in France in 1965 there was only one TV channel.  It was in black and white and both financed and run by the State.  Who says “financed and run” also means filtered.  France was coming out of the Algerian War for Independence which had nearly cost General de Gaulle his life when his car was attacked in the Boulogne woods.  The Minister of Information at that time had the right to impose programs (organisation, theme, guests, broadcast date and time).  He also had the right to veto and refuse to broadcast programs that were too critical of government actions.  Moreover, though it was impossible to control everything, treating subject like “La force de frappe” (France’s atomic bomb) or the need to insist on the “positive side” of daily life, those who worked for the station most often just “did their job” and tended to follow instructions. As for the other media, the censorship board also carefully watched over and eventually censored, in the name of homeland security, what was being printed in the press and especially newspapers like the Communist Party’s l’Humanité, but also to magazines and other newspapers in general.  The use of graffiti and posters created by Beaux Arts  students was an important method of response to this censorship.

A second theme dear to May ’68 in France was the broken dreams of a consumer society intent on “ever more and ever faster” at any price and the power of authority intent on imposing their ideas at all costs.  In a country where the Catholic Church had always had its say, contraception was also brought to the spotlight, as was the role of workers in decision making before a boss who had all of the rights on his “subjects”. 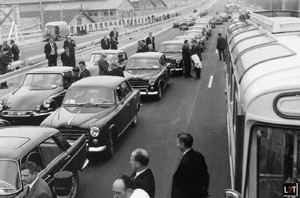 Paris May ’68.  Everything comes to a standstill.

Conscious of the turn the events were taking, on May 11th Prime Minister Georges Pompidou announced publically that the government would reopen the universities, but it was too late.  On May 13th France’s three major trade unions called up a one day general strike and street march that sent over a million people onto the streets of Paris.  Made up mainly of faculty, students and workers alike, the turnout was even bigger than that of 1936.  By May 14th the general strike was prolonged and had now grown to over 11 million people, 22% of the population of France and ¾ of the work force.  It would include National radio and TV’s technical personnel and even the police themselves.

In the second part of this article we’ll talk about events that took place during the two week general strike and riots in May of ’68 and the effect of theirs outcome had on both the university and the political and social landscape of France thereafter.

Thanks to Jean-Luc Besset’s Live2times site, you can see videos of the student revolt here [1].

Special thanks to Jean-Luc Besset at Live2times.com for the Sorbonne amphitheatre and stalled traffic photos, as well as the videos of events.

The poster and photo of CRS are reprints from Wikipédia commons