Angels of the French Revolution 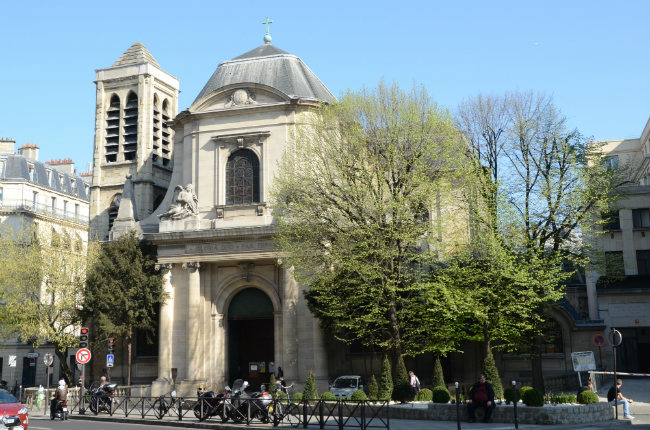 “It was the best of times, it was the worst of times, it was the age of wisdom, it was the age of foolishness, it was the epoch of belief, it was the epoch of incredulity,” as Charles Dickens wrote in the Tale of Two Cities, his epic novel inspired by the French Revolution. The causes were many: the rise of the bourgeoisie,  anger over an unfair tax system, a couple of cold, hard winters following poor harvests and compounded by a rise in the price of bread, led to peasants’ unrest. Animosity towards the Catholic Church was yet another spoke in the wheel of destruction. The Catholic Church was the greatest landowner in the nation, and in many parishes, citizens were obliged to pay taxes to the crown, as well as tithes to the church, whose holdings in wealth and property were immense.

Frustration and despair among those struggling to survive triggered the rampage on Versailles; aristocrats’ heads rolled at the guillotine. Members of the clergy were forced to choose between allegiance to the civil constitution of the clergy or death. Religious edifices were emptied of their ornaments; choir stalls, pulpits, confessionals, statues and reliquary were sold at auction as ‘carpentry wood’. Church facades were descrecrated: mobs swung their axes at statuary and sculptures, leaving mutilated images in their wake. A curious exception was the artistic deployment of angels adorning the pediment of the side door of the St. Nicolas de Chardonnet Church (5th arrondissement). 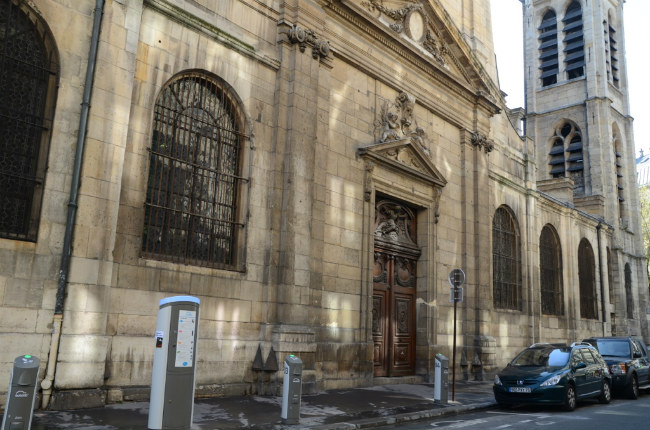 Side Door of St. Nicolas Church by Rosemary Flannery

Named after 4th century bishop Nicolas of Myra, the church began as a 13th century chapel near a field of chardonnets, or thistles. Rebuilt and modified in the 15th century, it was renovated yet again in the 17th century by Charles LeBrun, official painter to Louis XIV and a warden of the church. LeBrun added an entrance on the rue des Bernardins with beautiful oak doors. Nicolas Legendre created its low-relief decor of two reclining cherubs from LeBrun’s drawings. The siecle d’or – the golden century’s – luxurious, refined style prevails here, with its depiction of the charming angels’ intricate feathery wings, and a flowing banner twirling as their garb. Between them, a ribbon floats behind a console decorated with acanthus leaves above a curvy shell. 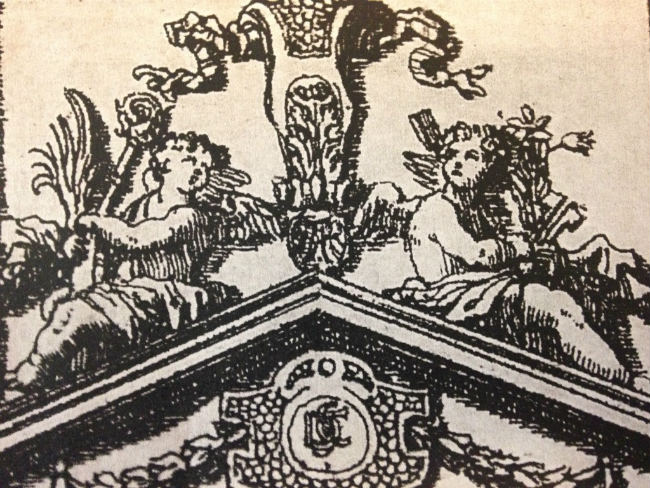 On the left side, the ‘angelot’ holds a book and a palm frond; his partner on the right, an elegant lily. But during the Revolution, one angel’s bishop’s staff and the other’s crucifix were replaced by slender, child-size pikes, the weapon of choice of the militants. The hapless angels were recruited to their cause. 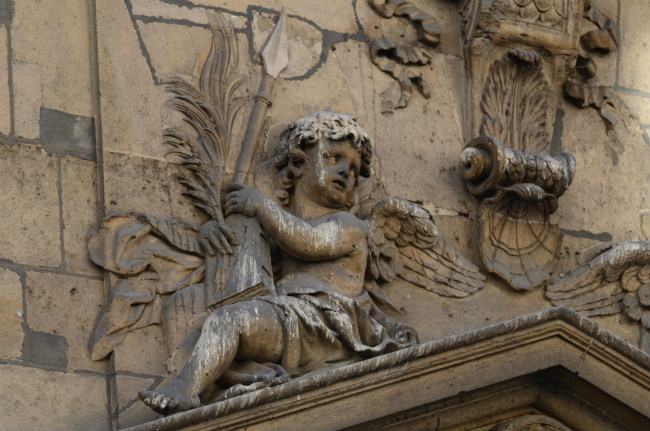 Angel on the left holding a book and a palm frond, by Rosemary Flannery. 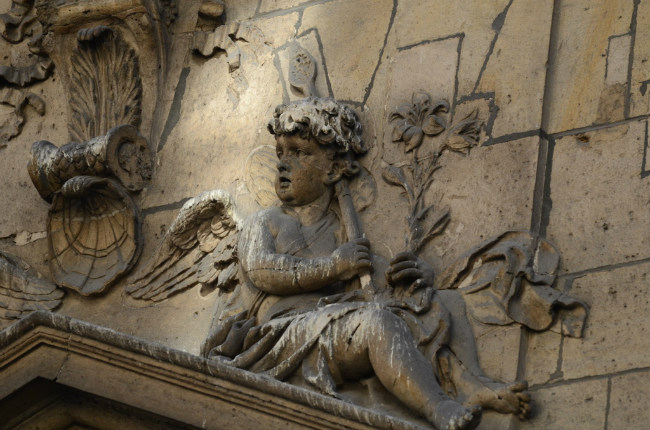 Angel on the right holding an elegant lily, by Rosemary Flannery.

The church would be closed in 1795, reverting back to its religious vocation in 1802 with the passage of the Concordat between Napoleon Bonaparte and Pope Pius VII, to assure national reconciliation between revolutionaries and Catholics.  Much of the property St Nicolas du Chardonnet was eventually recovered or replaced, but the angels remain armed, testament to  the church’s dramatic history.

Previous Article Five Ways To Celebrate Bastille Day in Paris
Next Article The Road to the French National Anthem: The History (and Lyrics!) of “La Marseillaise”