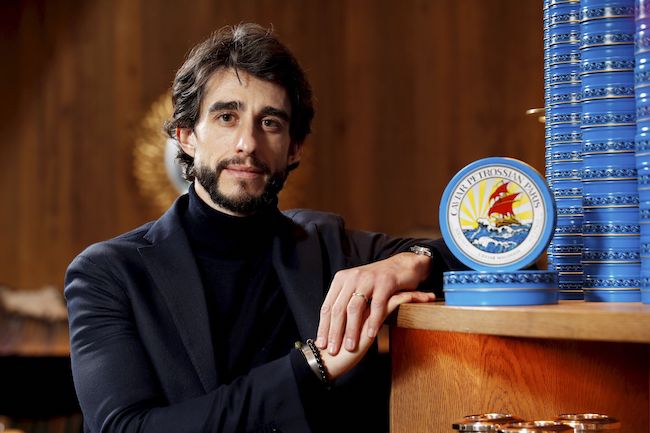 This is 2020. Travel restrictions will be lifted in France today (December 15th), and so it seemed the entire population said, “I’ll be home for Christmas.” A curfew will be put in place though it won’t apply on December 24th, and public gatherings are taboo. Sadly, bars, cafés, and restaurants remain closed. However all is not lost even if we can’t go to restaurants: They can come to us. With gourmet take-out options, top chefs are taking the pressure off tired home cooks and helping you make your end-of-year feasts sublime. All in strict compliance with health protocols, bien sûr. Here are some recommendations.

Petrossian and the chefs have compiled complete festive menus (from €75) and super-somm Estelle Touzet has chosen wines, champagnes, and sakés from Petrossian’s cellars.

In Paris, try such delights at Rostang Père et Filles chez Dessirier and Restaurant Dupin. Chef Tomy Gousset is working with Petrossian at his three restaurants: the 1* Tomy & Co. Hugo & Co, and Marso & Co. Last but not least, the artisan butcher to the stars, Hugo Desnoyer suggests his sublime veal tartare/caviar Ossetra Royal d’Hugo Desnoyer (€67), which is also available from the boutique at 28 rue du Docteur Blanche in the 16th.

Place your Petrossian order for delivery 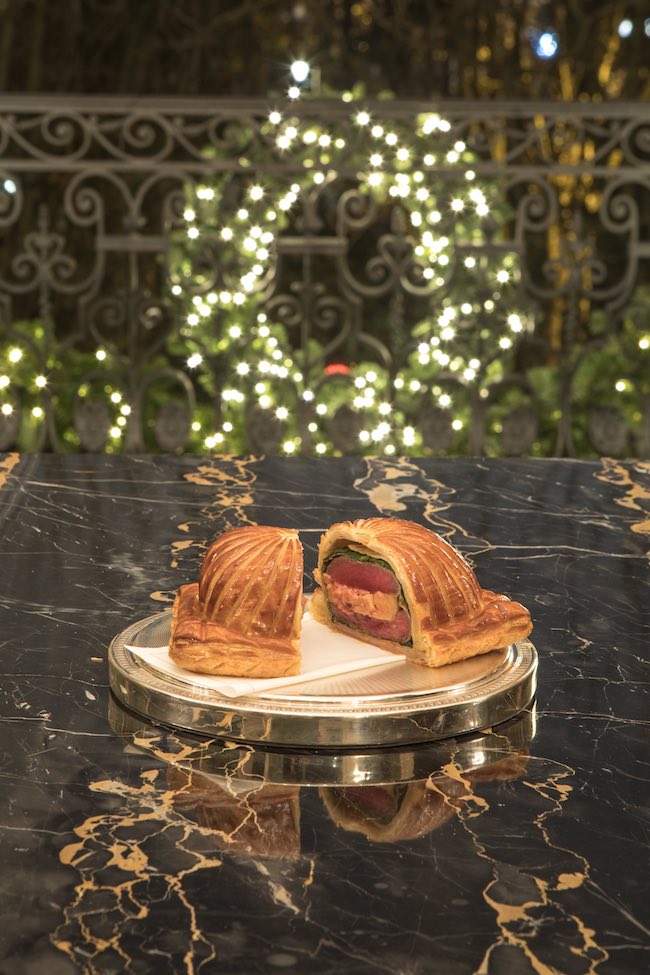 Located in a handsome 19th-century townhouse in the 8th, Le Clarence is an elegant destination with two Michelin stars. Star chef Christophe Pelé plans a gourmet Christmas at your home this year. His multi-choice menu includes Saint-Jacques starter (€20) and Tourte Piegeon/foie gras, wild mushrooms/pommes dauphine (€75), which you can mop up with Ten Belles bread, before finishing with the Bûche Clarence (€28). Head sommelier Gaëtan Lacoste suggests a number of options from €17-€600, like white and red Clarendelle, Pessac-Léognan Château Haut-Brion 2001 or La Clarté Haut-Brion 2014.

From the cheffe’s left bank restaurant, order Michelin-starred cuisine to serve at home. Try pre-dinner gougères for your aperitif, then fabulous foie gras confit with Timut pepper / pear and apple chutney, ginger and celery. Follow with a plump, juicy scallop in its shell – just pop in the oven for a few minutes (pumpkin and mushroom garnish and jus with walnut parsley). The main’s blue lobster, sweetbread, poultry, salsify Vol au Vent, drizzled with Arbois yellow wine sauce. Then ewe’s cheese, quince paste and caramelized nuts. (Did we mention the house baked bread and Basque butter spiked with Espelette pepper?) For dessert, the Kirk Whittle combines Dominican Republic Tainori chocolate coriander and chicory. Menu from €190 (two people). Pick up at 4 rue d’Assas in the 6th.

These convivial canteens are cooking take-away dishes to order. Check out:

A peek into the Struria Caviar de Noël tin

A bit kitsch – but it’s that time of the year – all proceeds of the 100% made in France merch goes towards restoration projects at the Elysée Palace. Vive La France!

“We know we can’t welcome you now – that’s why our vouchers (€32-€110) are good for one year”, says famous pastry chef Christophe Michalak at Polichinelle.

What to eat – easy – but what to wear? I want everything from Maria Grazia Chiuri’s wonderfully woke, confinement-inspired collection.

With restaurants not reopening before January 20, take-out’s part of our “uberized” lifestyle. So, in solidarity, bakers, butchers, market gardeners, fishmongers, restaurateurs, wine merchants, chocolate makers, grocers, winegrowers, cheese makers, confectioners, pastry chefs and even caterers join together, collectively promoting their e-commerce stores. This brand new platform was created by Rémi Ohayon who trained alongside Jean-Paul Jeunet (** Michelin), then Bernard Loiseau, and was destined for a promising culinary career until he tuned into web marketing – founding his first agency in 1996. In 2011, Ohayon won the prestigious MOF (Meilleur Ouvrier de France) in communication and website creation…. The rest, as they say…..

And finally, Andre Terrail and chef Yannick Franques (MOF) invite you to their duck fest.

Where to Eat in September: Paris Restaurant Buzz