December Feasts: Where to Eat in Paris This Month 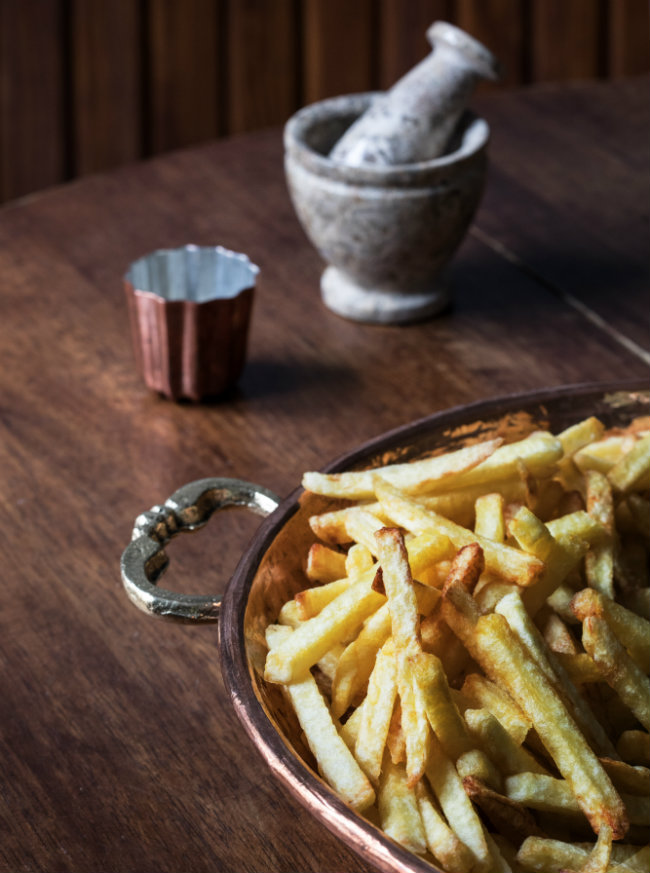 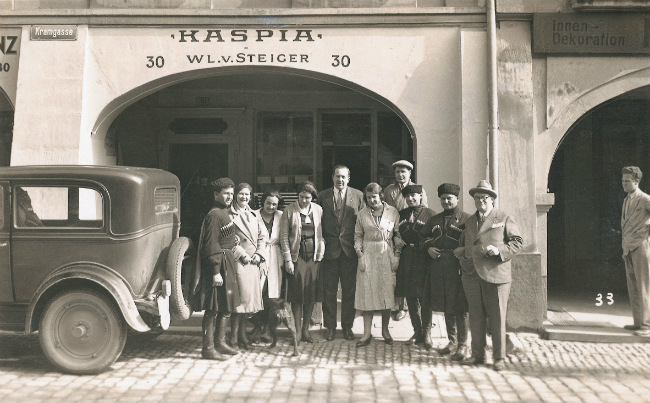 Tried and tested, here are some addresses that we recommend during the festive season in the City of Light.

“What I say is that, if a fellow really likes potatoes, he must be a pretty decent sort of fellow.” A.A. Milne

It’s always a thrill to glide through the revolving doors of the George V; the lobby showcases incredible flower and plant creations by Jeff Leatham, the hotel’s Artistic Director. Ahead, the iconic marble courtyard around which are located, arguably, the best restaurants in town, as well as a bar and gallery buzzing with ze beautiful pipole. 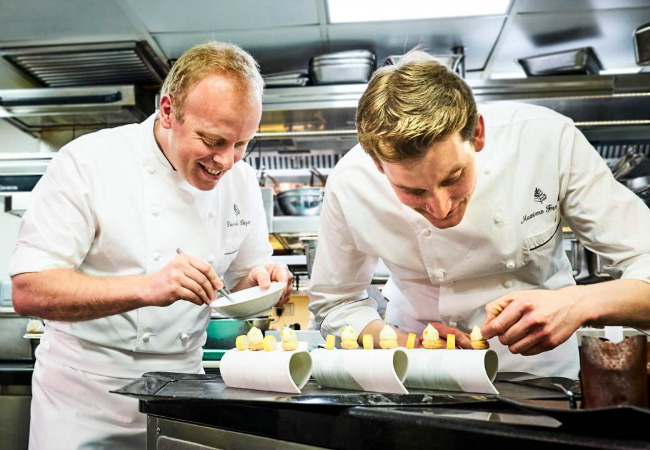 In the 2017 Michelin guide, Four Seasons George V restaurants were awarded a galaxy of stars: *** for Christian Le Squer at Le Cinq and * each for L’Orangerie (opened in May 2016) and Le George (by chef Simone Zanoni) making it the first hotel in France to boast three Michelin-starred eateries.

The talented David Bizet leads the brigade at L’Orangerie, housed in a glass-and-steel Pierre-Yves Rochon designed structure extending from La Galerie. You’re eating outside – although it’s inside. Book ahead; there’s only room for 20 guests. 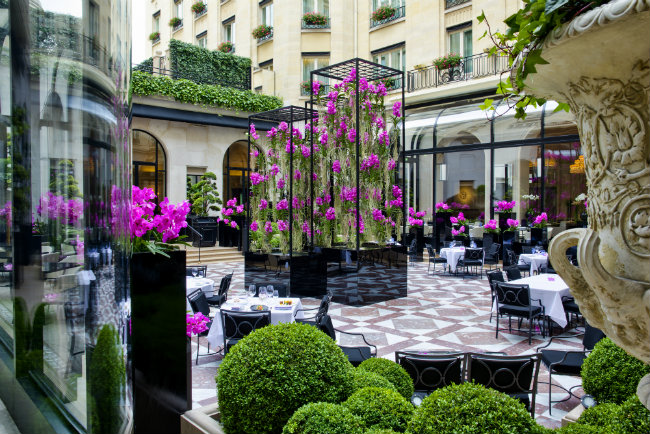 Bizet’s not a new boy, having worn the whites for 17 years at Le Cinq. His dishes are delicate from the very first amuses of beetroot chiboust, horseradish and feta cream. 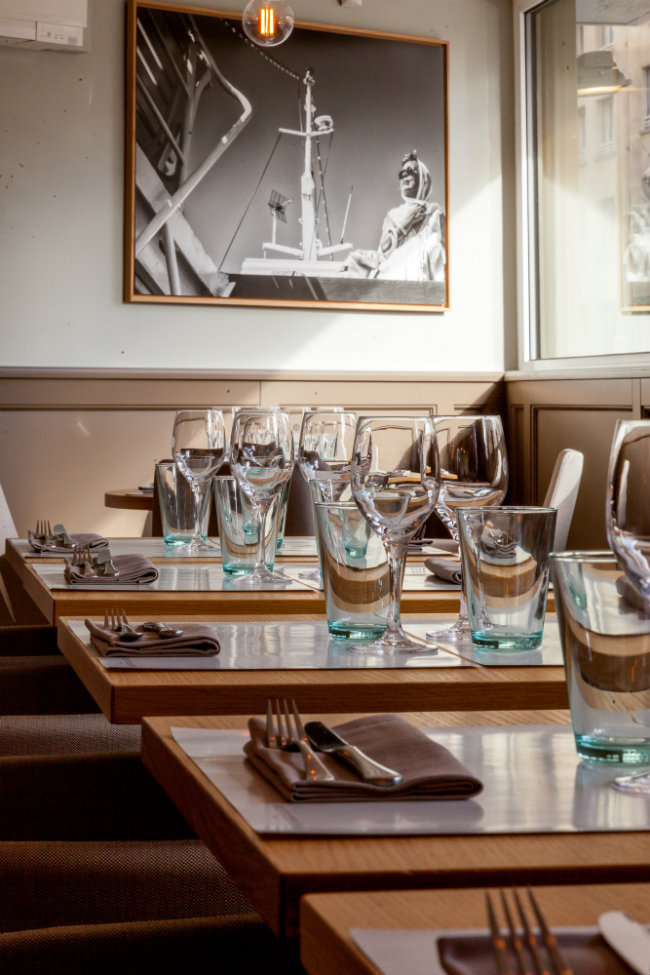 Recently opened on the first floor of the deli that formerly housed Hediard, this bistro is minutes from the newly opened outpost of La Grand Epicerie de Paris on the Right Bank.

Brand Mavro began back in 1981 and since then the three brothers Evagoras, Andréas and Dionysos have won a multitude of awards for their interpretation of Greek/Cyprus/Mediterranean cuisine. 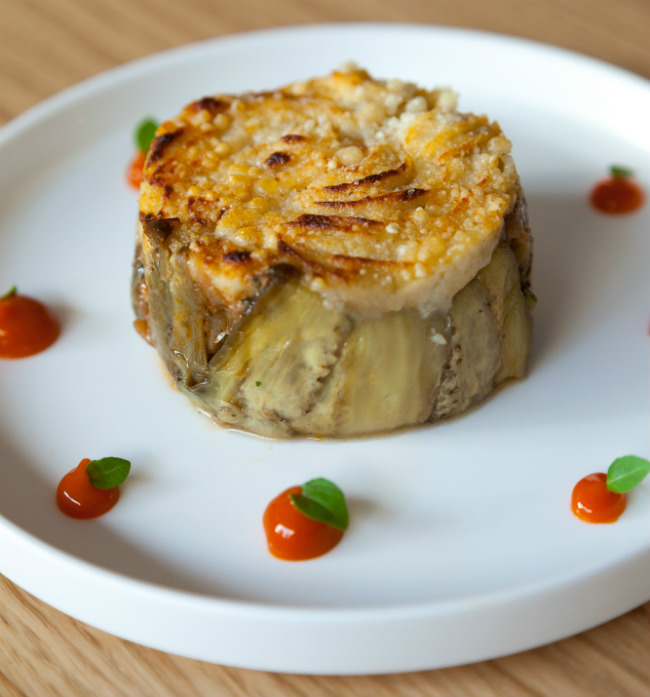 It’s not a Paris-Brest for dessert but an Athens-Brest (€8.50) and do taste the creamy goat’s yogurt Mavrommatis with honey and walnuts. Leave via the incredible deli and order festive delicacies which can be collected in-store… and you can say, “of course I made them!” 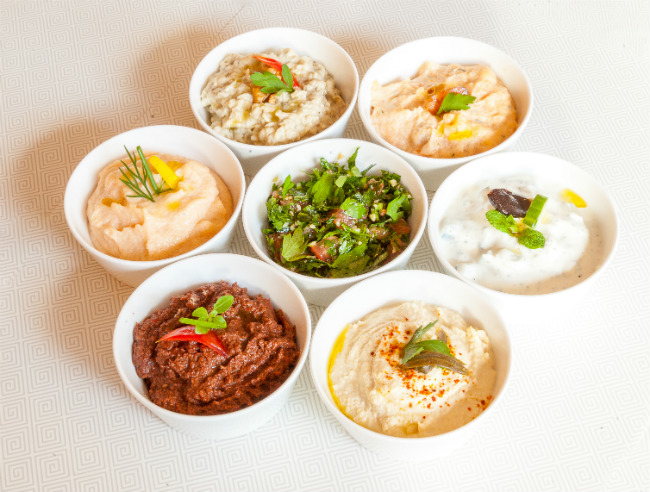 “Because customers love to try before they buy, we’ve created a tasting bar,” explains François Sylvan, the delightful caviar-savvy server. A recent makeover to the classic boutique is part of the 90-year celebrations of this iconic address. Available in the boutique– to taste on the elegant royal blue banquette with a flute of Duval Leroy Kaspia (€16) champagne– or take away: 5 Caviars from Imperiale Baeri (€28) to Royal Beluga (125g – €1477); Smoked salmon; Tasting platters (€25) not forgetting the vodkas, bien sûr. 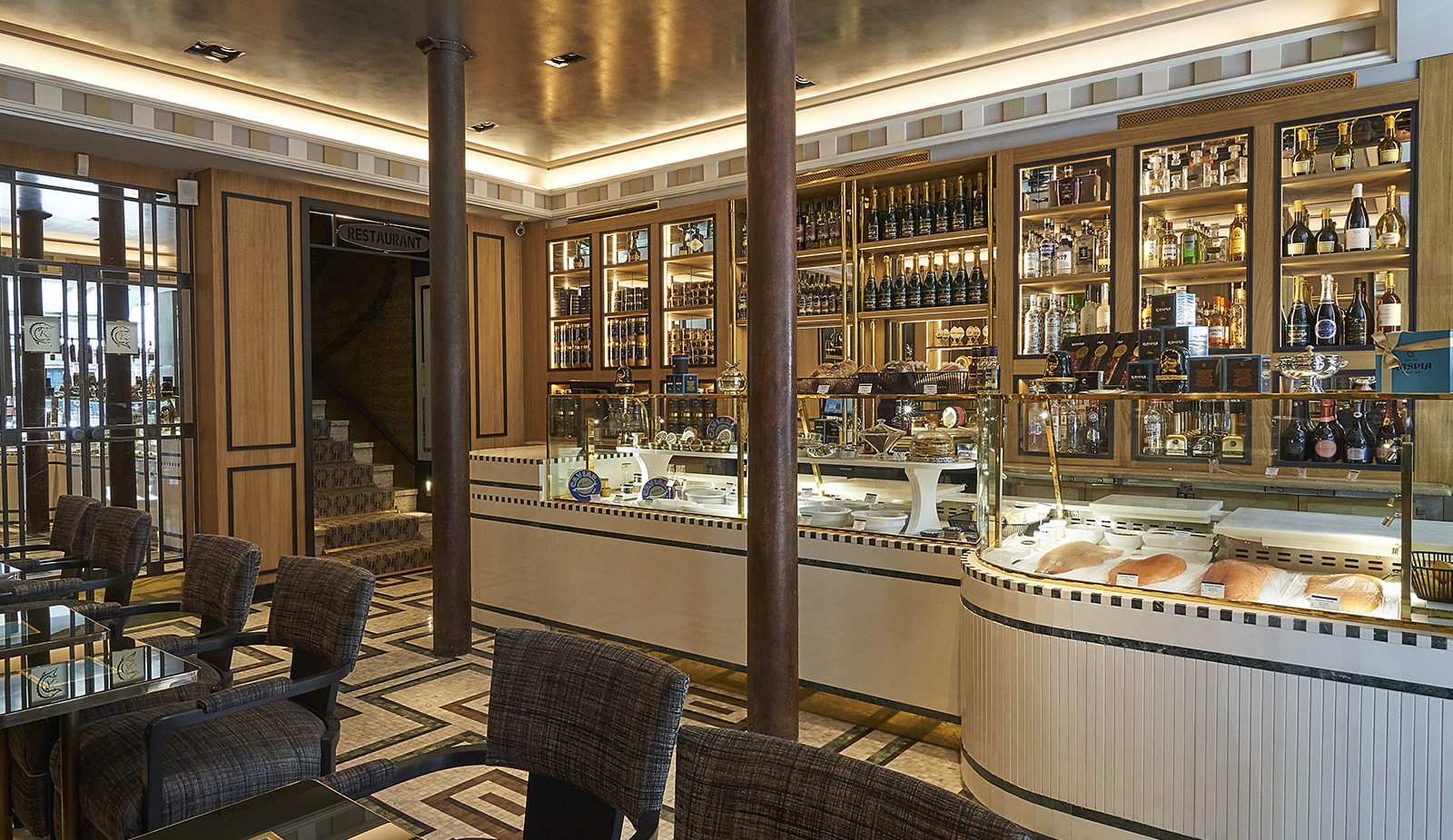 Eric Fava is my tip for the top — a wonderful finish to 2017 — with the opening of his  bistrotheque on the hill, with a terrace to watch the world hurry by. From his open kitchen, Fava– who’s sharpened his knives with the likes of Bernard Pacaud at Ambroisie, Le George V, and Trou Gascon– sends out dishes such as house smoked salmon, avocado mousse, wasabi cream or pôélée of girolles/mushroom velouté. Mains of parsley crusted cod, Thaï bouillon, spaghetti of vegetables. To finish, try the Vanilla Financier “Ile Maurice”, pistachio and vanilla ice cream (ask for a taste of the Mars ice cream!) 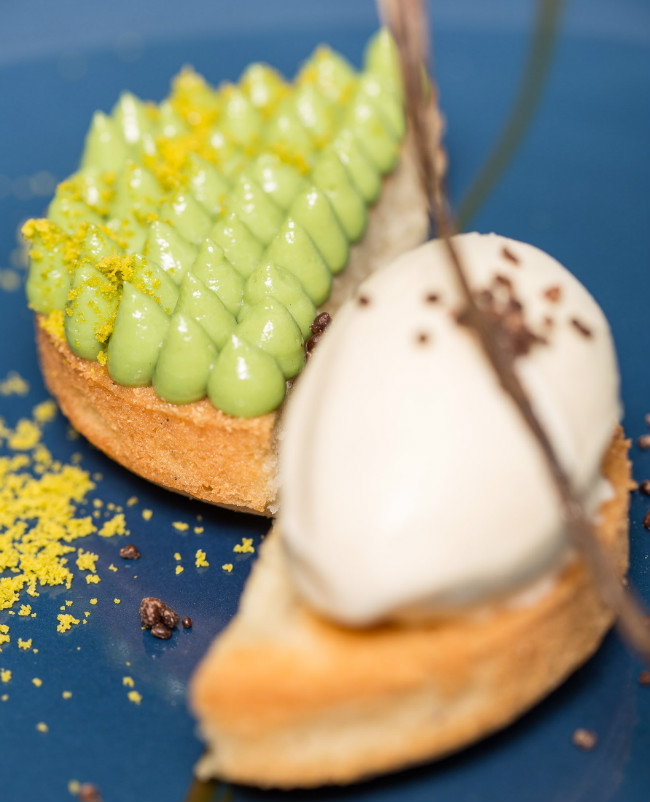 Lunch formula from €17. A La Carte about €46 + wine. Adorable service from Léonie, the future Madame Fava !

The street is the former road through which the fish from the northern ports arrived at Les Halles, hence its name. 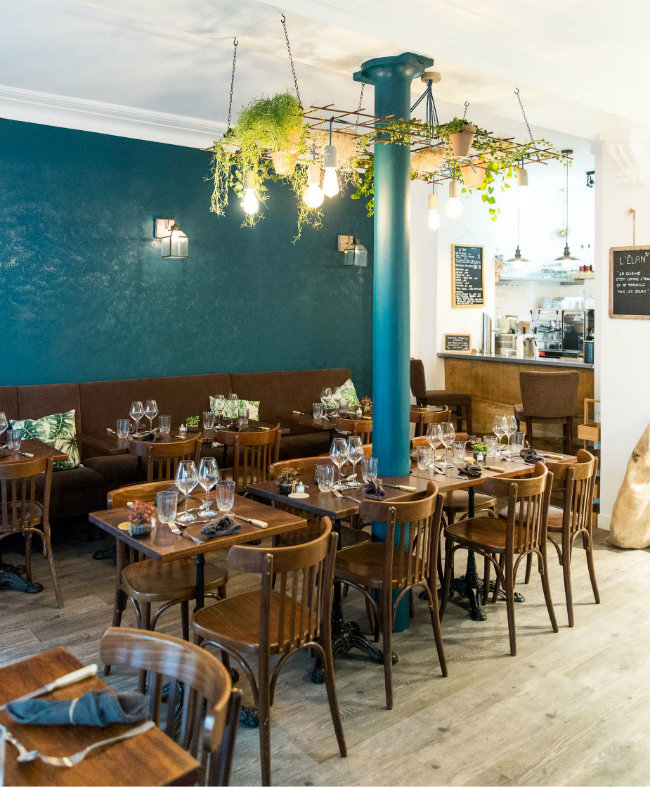 With the launch of Le Grill Astier, Hubig puts his signature to a fabulous concept from the starter of a superb salad as well dressed as the bistro’s clientele. “It’s healthy and takes a while to eat (with warm fresh soda bread) so the chef has time to cook your choice of beef,” he explains. 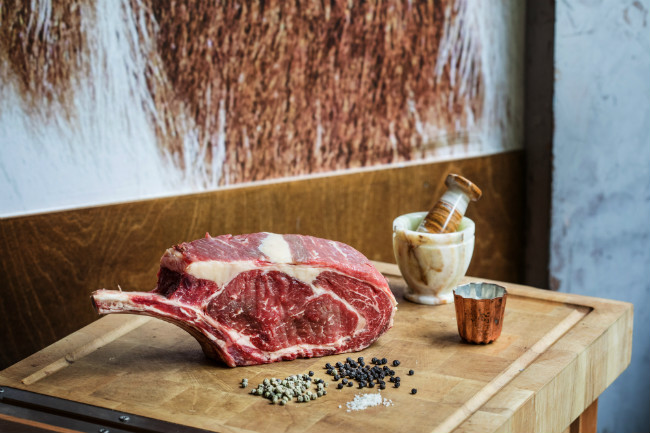 If you love Corsica – and who doesn’t – you’ll love Villa Corse, created as an homage to La Belle Isle. (Napoleon looks on in approval from the walls.) Chef Cyril Gauzit (who had former stints chez Robuchon, Frechon, Mavromatis) creates fresh Mediterranean dishes from his open kitchen. Begin with Carpaccio of Octopus or Cauliflower Taboulé, mousse of cauliflower, warm house chestnut flour bread is served by Michel de Santiago, who will suggest wines from Corsica or “Le Continent”. Say, the red Clos Canarelli 2014 (€60) or by the glass from €8. Mains include signature Brocciu ravioli, spinach and nepita jus and tender sea bream with seaweed butter, yellow pepper and fresh herbs from the maquis. Cheese is from Jean-Noel Casanova and don’t ignore the traditional Fiadone ricotta “cheesecake” dessert. 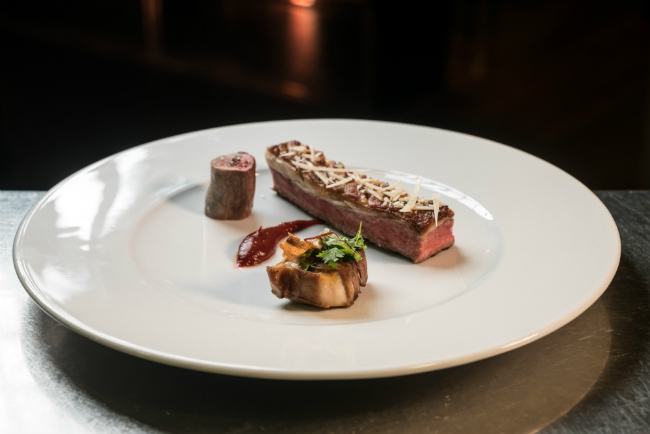 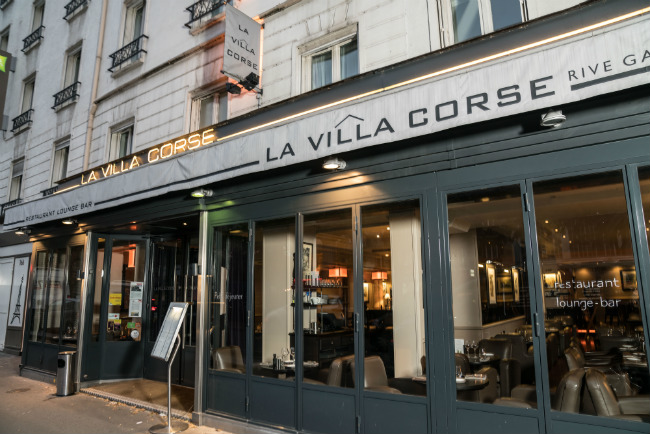 Previous Article Deck the Halls: Wow-Worthy Christmas Decorations at Paris Hotels
Next Article In Homage to Johnny: The Man on the Train, A Film Starring Johnny Hallyday