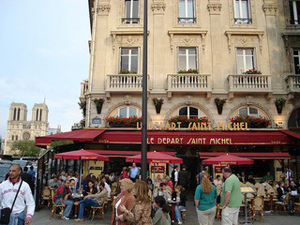 The Latin Quarter in the ‘60s

Until 1974 I lived next to the Porte d’Orléans in the 14th arrondissement, but, as a student, the heart of 5th arrondissement was my real home. Before 1968 the Latin Quarter was very much different from what it is today. Few tourists wandered further than the banks of the Seine where Notre Dame Cathedral and the Shakespeare and Company bookshop marked the boundary. The rest of the “Quartier Latin” around the Sorbonne was pretty much reserved reserved for jazz clubs, University bookshops, small cafés, art and essay cinemas and a self service cafeteria on the corner of the St Michel and St Germain Bvds, across from the Cluny Museum.

A recent stroll down memory lane along St Michel Boulevard in the company of my visiting American friend Carla landed us across from that same Cluny Museum. After 1968 the Sorbonne was decentralized and the area turned to tourism. Our visit was intended for the makeup department at the local Monoprix, owned for 50% by the Galeries Lafayette Department store and 50% by the Casino grocery chain, which explains why the only food offered there until recently was supermarket fare. But, once inside, the first thing we encountered this time was the store’s fast food restaurant.

Inevitably, considering the cost and the convenience, after our purchases we ended up coming back and eating two salads from a plastic domed cardboard plate, served with plastic forks and knives in a paper napkin, followed by a cellophane wrapped desert and plastic cupped coffee. It seems all of the new Monoprix stores in France are now installing this “restauration rapide” area. Of course it’s just a matter of moving some of their “ready to eat” products off their grocery shelves, installing a microwave oven and adding a couple of cash registers, but setting up these eating spaces in Monoprix is something new. It has only come to exist over the past two years. 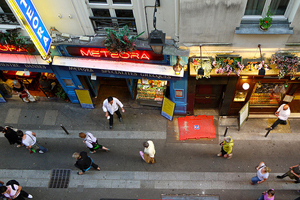 As we sat on the red plastic upholstered bar stools in front of a much too narrow Formica bar and stared out the bay windows, we were greeted across the boulevard with tourist shops galore, but also with a Starbuck’s. Though they are adding more and more espresso to their lattes on both sides of the Channel, there are still only some eighty Starbucks in all of France. The French are just too used to their little porcelain cup of “café noir” and, unlike many of us Americans, neither the French nor the Brits necessarily drink coffee all day long.

Another thing that has changed over the years, now most of the side streets off the Boulevard, such as the rue de la Huchette, have waiters posted out in front hailing passersbys,  a new habit reminiscent of  sidewalks outside the strip shows in Pigalle!  Still, for one of the best Subway style “fast-food” deals in Paris, you just can’t beat the Patisserie du Sud Tunisien sandwich bar nest to rue de la Huchette, on the corner of rue de la Harpe and the rue St Severin.  For less than 5€ you’ll get a hollowed out deep-dish bun packed with tuna, a sliced boiled egg, black olives, diced carrot and onion, green chilli pepper and a hunk of potato.  They only serve take away fare including sodas and honey sweet Tunisian deserts, but there are benches, fountains and little squares nearby to sit and watch Parisian life evolve around you.

If the famous Peter Seller’s scene from the Pink Panther is still valid today, my own personal French hamburger memories go back to the mid ‘60s and Jacques Borel’s Wimpy restaurants. The first Wimpy restaurant, just down the Avenue from the Paris Opera, was reputed to sell “real America hamburgers” with ketchup and mustard served on the counter and even a jukebox in one corner of the room. Red chequered napkins throned on each table and beside them …a fork and knife.  Despite efforts, Borel closed down the chain in Paris at the end of the ‘60s and set up the first restoroute business, those long fast food restaurants you still see today spanning freeways all over France. 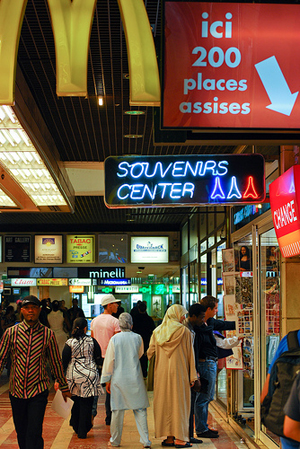 Since that time other precursors have made their way onto the French fast food scene. McDonald’s (“Mc Do” for the French) has been around since 1972. An American, Raymond Dayan opened the first Mc Donald’s franchise in Créteil, a lower middle-class suburb southeast of Paris, but “disputes” cropped up and that first restaurant soon changed its name to O’Kitch. Soon after the rest of Dayan’s restaurants were bought out by Yum’s, owner of KFC and Pizza Hut, and the restaurants became a part of the “Quick” chain.

McDonald’s didn’t reappear until 1979, when they “officially” opened their first restaurant in the Franco-German border town of Strasbourg. These days they aren’t about to disappear from the French landscape. A recent study in the Figaro  agazine’s Economic issue reveals that, with some 41,000 new positions last year and another 44,000 planned for in 2013, Mc Donald’s is the top employer in France for the fourth year in a row. Note that these are not turnovers, but new jobs coming onto the market. Who pops up in second position? Yum Corporation’s “Quick”. Even with a socialist government, the state owned train system (SNFC) is only in fourth position! And the restaurants are full of French office workers, not tourists.

As *research seems to point the finger at links to fast food in both type 2 diabetes and now Alzheimer’s disease, the big news in fast food these days is the Subway chain. Subway already has over 400 restaurants here and expects to have 1,400 in France by 2015. Perhaps it is Subway’s seeming effort to make healthier fast food that hasn’t yet attracted the wrath of French slow food advocates like ecology activist José Bové, intent on putting an end to both OGMs (organically modified crops) and junk food “malbouffe” in France.

As a child, our French born son used to become furious with me whenever he saw his American mother gleefully pick up home fried chicken with her fingers instead of eating it “the French way” with a fork and knife. In a country where gastronomy — pairing wines with foods, setting a table, and the role of the meal in French culture — was placed in 2010 on UNESCO’s “World’s Intangible Heritage list” alongside the Acropolis in Athens, Greece or Australia’s 2,300 km long Great Barrier Reef, even the French government is worried these days as obesity is on the rise. They’ve even begun sending packages of lentils and fruit home to parents of French school children. And our son? He’s been living and working in California for over fifteen years now. I wonder how he eats his chicken these days.