As a self-confessed, unabashed lover of Saint-Germain-des-Prés, dare I even say addict, walking once more on her streets again, after a reluctant absence, lifts my heart and I really know I’m back in Paris again. My Paris.

And nowhere for me encapsulates the soul and vibrancy of the St Germain district quite like the little Rue de Buci.

Starting at the crossroads of Rue de l’Ancienne-Comédie, Rue Dauphine and Rue Mazarine, Rue de Buci winds it way to Boulevard Saint-Germain passing Rue Grégoire-de-Tours and Rue de Seine on its way. At only 11.50 meters wide and 190 meters long, the Rue de Buci crams so much into this little street that it is bustling day and night with pedestrians shopping, drinking or dining.

The Rue de Buci got its name from Simon de Buci, the first president of the Parliament of Paris in 1341, who in 1350 bought the Saint Germain gate which opened onto the narrow street.

By the 1700s the Rue de Buci and its adjoining streets in Saint Germain had become popular watering holes for artists, intellectuals, performers and writers. And it was a group of these disparate, talented men who added singing to the neighborhood’s attractions. 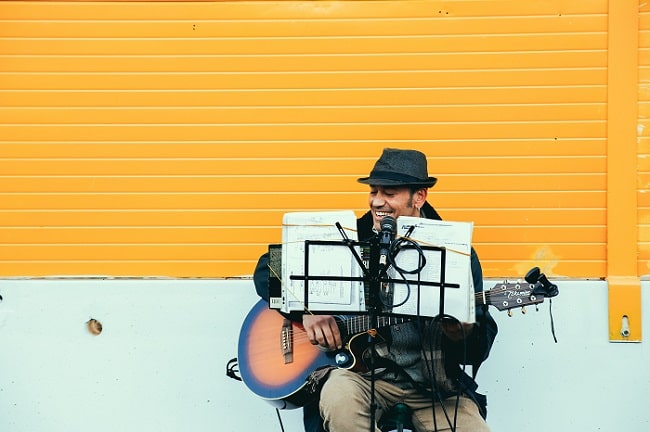 They had started three years earlier– in the ‘spirit of conviviality and gaiety’– meeting in the Rue de la Grand-Truanderie to dine and sing together. It was in 1729 below the cabaret du Caveau owned by Nicolas-Alexis Landelle at the crossroads of Rue Dauphine and Rue de Buci, that the eight men, after a meal lasting 10 hours, decided to formalize their group and the goguette du Caveau was born. It was reported that afterwards all the men went their separate ways, drunk…

(The idea was likely taken from an association formed in 1630 of drinkers and singers named appropriately, Le Concert des Enfants de Bacchus. The singing had to be accompanied by copious amounts of alcohol, which fortuitously, presented La Société du Caveau with absolutely no problem.)

So popular was the area– with Le Procope and the theater just around the corner on Rue de L’Ancienne Comédie– that sedan chairs waited outside the establishments like present day taxi ranks, to take their (inebriated) clients home.

The goguette du Caveau was the first of its kind, but certainly not the last, and although this one lasted only ten years, others endured until 1939 in Paris and goguettes were to be found in Marseille, Algiers and Belgium. 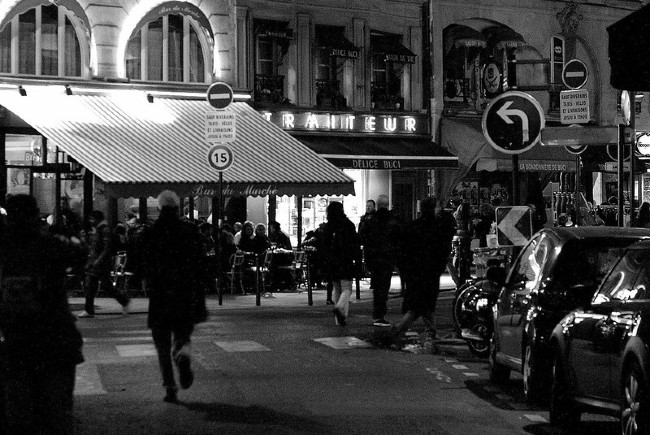 La Société du Caveau, as it came to be known, was a club exclusively for men. They numbered at that time 20. Amongst the original members were its founder Pierre Gallet, François Boucher (an artist), and the singer Pierre Jolyot. New songs were to be sung to each other and it was here that Jean-Philippe Moreau composed Frère Jacques, the song still sung now, not only by French children, but children the world over, learning French.

The colorful history of the Rue de Buci was dragged into the 20th century during the Second World War when after the Nazi invasion of France and the occupation of Paris, a brave demonstration of the Resistance, led mainly by women, took place in April 1942. The PFC (French communist party) assigned the OS (Special Organization) the task of organizing demonstrations against food rationing, the scourge not only of Paris but of all France. Their specific aim was to target restaurants and luxury food stores and then to distribute food which was unavailable to the average Parisian. On May 31st, these activists invaded the Eco food store to appropriate cans of sardines. The subsequent fight between the OS and employees of the store resulted in the police being called. Men in the OS protection group shot two of the policemen dead. Twenty arrests were made including that of the ring leader, Madeleine Marzin, usually known as Lucette. 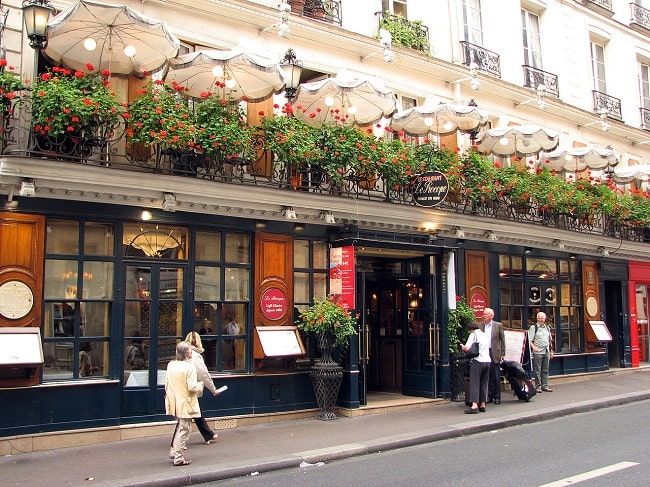 It was during the same war, in 1943, that Simone de Beauvoir and Jean Paul Sartre moved into the Hôtel La Louisiane at 23,25,27 Rue de Buci. Beauvoir took the larger room 10 on the top floor and Sartre a smaller room on the floor below. Beauvoir stayed there until 1948 before giving up hotel life for a room in Rue de la Boucherie. (Sartre had moved out a little earlier to his mother’s apartment on the corner of Rue Bonaparte.) But it was during those febrile war years that La Louisiane became the epicenter of intellectual life, communist debate, drama, fallings out, and the quiet beginnings of a sexual revolution. Both Sartre and Beauvoir took many lovers; Beauvoir was as comfortable sleeping with women as men. Her students visited, and friends– including Albert Camus and Juliette Greco– took rooms there. Sartre was writing Les Mouches and Beauvoir had her first novel, L’invitée, published.

La Louisiane advertises itself modestly as “offering old school rooms, an ancestral and quaint hotel, simple, clean and tidy-a budget hotel– do not expect luxury but plenty of history, wifi and ensuites.” The journalist and writer, Agnès Poirier, rented room 10, ‘the round room,’ and felt it had not changed since 1940. For anyone interested in that period of Paris life, I can not recommend her book enough. Left Bank: Art, Passion, and the Rebirth of Paris, 1940-50 is fascinating.

However, if a basic hotel is not your idea of heaven, the Hotel de Buci is a classic hotel boasting every comfort.

But what has the Rue de Buci to offer today? Bar/restaurants/bistros/cafés are as good a place as any to start, and without doubt, the very essence of French life.

The Café de Buci, with its signature red awnings, straddles the corner of Rue Mazarine and Rue de Buci and is classified as a historic monument, which in France is a building (or even a piece of furniture) which has received by an administrative decision, a legal status to protect it, as of historical, architectural or artistic interest. After an extensive refurbishment starting in 2018, Le Buci is up and running again with new and faithful clients packing its interior and terrace until five o’clock in the morning. (My own favorite stomping ground was on the other corner at 1, Rue de Buci, Le Conti, now sadly and inexplicably closed and covered in peeling posters.)

Opposite the Café de Buci at no 5 is Maison Sauvage, impossible to miss for its abundance of hanging foliage. As with all the cafes and restaurants mentioned, seating is available both inside and on outside terraces.

Le Molière, at no 12, serves everything from crepes to mussels and has a cave des bières attached. As an added piece of interest, Le Molière is also an historic monument where a certain Monsieur Jean-Baptiste Poquelin, actor and one of the greatest French playwrights, certainly of comedy, decided on the pseudonym Molière for his all his future works including of course, Tartuffe and The Misanthrope. This was also the address of the first Masonic lodge in Paris established in 1732.

Lovers of Italian food are catered for at Ristorante Luigi (no 8), Pastavino (no 18) and L’Oliveto (no 38).

Coffee, croissants, baguettes and so much more can be had at Paul at number 21 on the corner of Rue de Buci and Rue de Seine, and at Smiths Bakery opposite. People watching on the terraces is almost obligatory. At Boulangerie Patisserie Thevenin, at no 6, the pastries are individual works of art, edible things of beauty, the business passed down from father to son since 1963.

Gourmet groceries are supplied by La Chambre aux Confitures at no 20 and at no 10, Charcuterie Alsacienne has everything one could ever hope to find in a deli and take way for a sumptuous meal at home. Amorino Buci at no 4 is a paradise for ice cream aficionados and has an ice cream cart outside the shop to tempt passers by. A Carrefour supermarket, albeit with a very small entrance (bigger entrance around the corner in Rue de Seine), stocks everything one could possibly need and is a godsend for anyone in a rented apartment. It is wedged up against the ubiquitous souvenir shop, The Vault of Paris, its goods spilling onto the sidewalk with postcard stands, tea towels, shopping bags etc. A well stocked, reasonably priced, Nicolas wine shop, next door.

If it appears that I am obsessed with food and drink (and you are probably right), serious shoppers will be lured by Lush, a cosmetic boutique at no 30, Nina Kendosa clothes at no 24, Question de Peaux leather shop at no 28 and back at the corner of Rue de Buci and Rue Mazarine, CLIF shoe shop. Book lovers are more than well catered for at the famous TASCHEN book store at no 2 with outside stalls displaying a selection of beautiful, reasonably priced hard backs. Almost opposite, on the corner of Rue Gregoire de Tours and Rue de Buci, is the wonderful bright yellow Buci News selling everything from newspapers and all kinds of stationary to souvenirs, key rings and small gifts.

But to get back to food, and one of the reasons the Rue de Buci was so deservedly famous and beloved, was because of the Marché Buci, which was at the very heart of not only the Rue de Buci, but of all the nearby streets of Saint Germain.

Established in 1813, this traditional street market was ablaze with color seven days a week, with seasonal fruit and vegetables, a vibrant flower stall, cheese and charcuterie stalls, rotisserie chickens, fresh fish and seafood and artisan bread stalls. Unfortunately in recent months and after more than 200 years, the Buci market is no more and now boasts simply a fruit stall standing defiantly alone opposite the Bar du Marché.

The market will be sadly missed by residents and tourists alike. On a more cheerful note, most weekends, a traditional jazz band plays at the corner of Rue de Buci and Rue Mazarine.

What more could you ask for in one little street?

(I apologize in advance for any establishments I may have omitted; I’m sure you will be able to find them for yourself and enjoy.)

Previous Article A New Street Named for David Bowie in the 13th Arrondissement
Next Article The Scoop on Flocking to Paris Fashion Week: A Bird’s Eye View