Paris- New York: Buvette Restaurant Reviewed on Both Sides of the Pond 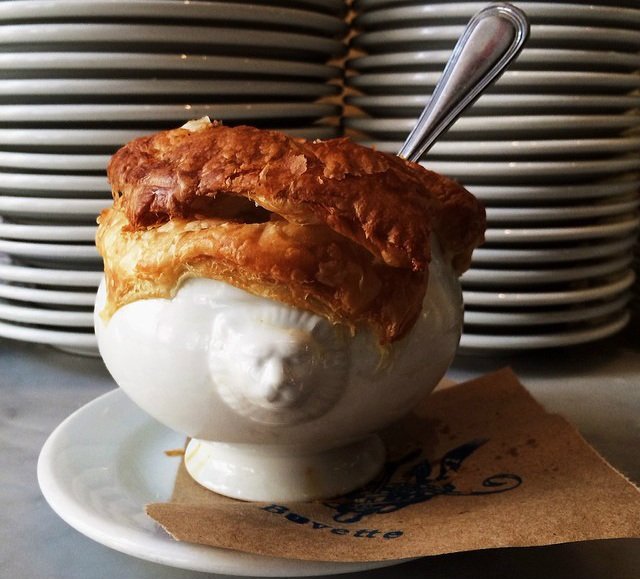 In Paris, food is everything.

In Paris, food is everywhere. In Paris, food is all-important. In fact, it seems one of the prerequisites for being French – be you native, off-shore born, or a posing American – is having a steadfast love of great food.

There is a restaurant in Paris called Buvette, which produces some exquisite French food. Located in the 9th arrondissement at 28 Rue Henry Monnier, it is the second location of Buvette. The first outpost of this French restaurant is in New York City, where it originated. 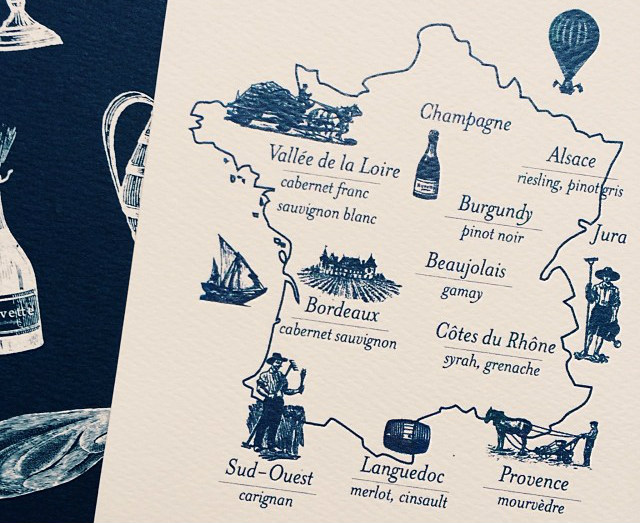 John-Paul Fortney, founder of Culinary Tours of Paris, says of the Paris Buvette and similar Franco-American spots: “Recently, there has been an absolute obsession with anything New York in Paris. In the 9th arrondissement in the part now referred to as South Pigalle (or SoPi), there was a New York style hot dog stand, a cocktail bar opened by graduates of NYU, and a New York style pizza place. It was mentioned on the news a couple of weeks ago that burgers are now the #1 most common menu item in Paris!”

Fortney continues, “More than once, I have had someone say to me something along the lines of ‘One day I’m going to leave all of this (referring to Paris, though not in a flattering way) and move to Brooklyn!’ Nothing against Brooklyn at all, just that there is that grass is always greener on the other side argument going on.” 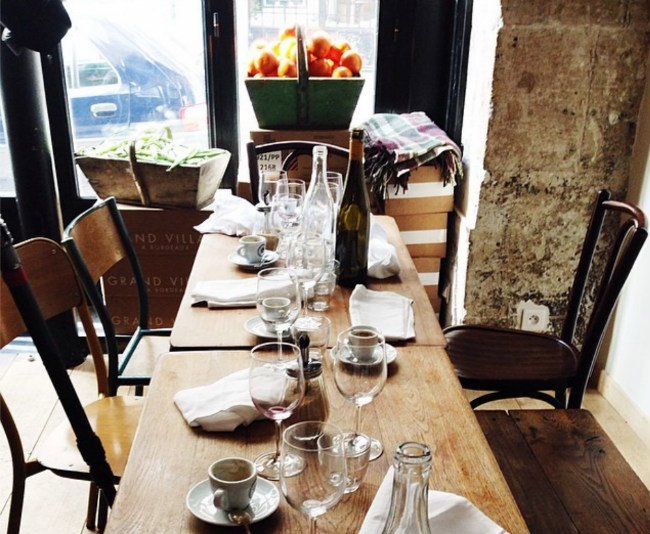 Across the Pond, the original Buvette was started in 2011 by Chef Jody Williams. It is located in the heart of the West Village at 42 Grove Street, and, as noted on its site: “is inspired by the European traditions that honor a history of craft and design where each detail evokes a sense of story, place and delight.”

Since opening, the French restaurant has been a haven for foodies, celebrities, New Yorkers, and out-of-towners alike. The recorded celebrity sightings from this unassuming restaurant are great in number. Gwyneth Paltrow is a fan of the restaurant; and as polarizing as the Oscar winner may be, her taste in this instance is en pointe. 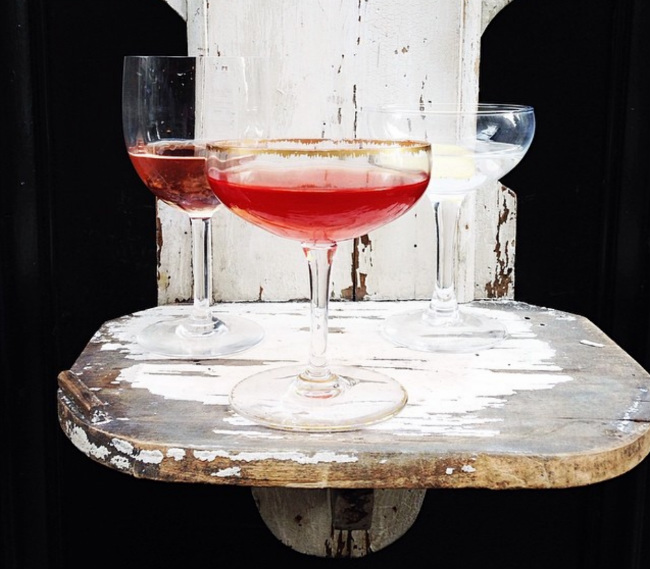 Buvette does not take reservations, which more or less ensures that the place is popular and difficult to enter (for proof of this logic, see Flat Iron steakhouse in London or Chez Gladine in Paris).

The dinner menu featured on the night I dined at the West Village location was delightfully simple, as it often is with restaurants of such caliber. The small menu, barely the size of two fists, also had a pop-up image of a fancy illustration (a nice touch). 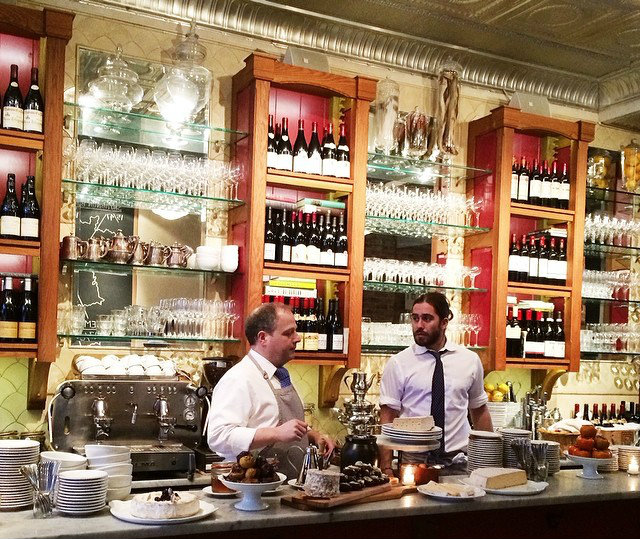 I debated between ordering the gigot d’agneu, a “chilled leg of lamb with flageoulet,” or the coq au vin, a “chicken stewed in red wine and mushrooms.” I settled on the coq au vin, in part due to worry that the lamb might upset my vegetarian friend more than the chicken would. The vegetables were ignored by us both, though not for lack of sounding delicious, as they included poireaux, artichaut barigoule, betteraves, and carrottes râpées.

The coq au vin arrived in a small pot, simmering in a salty broth sauce with shallots, lardons, mushrooms, and chicken. French bread was brought to the table with full-fat butter. The bread was a perfect dipper to sop up the remaining sauce (an uncouth act, but one that is hard to resist). 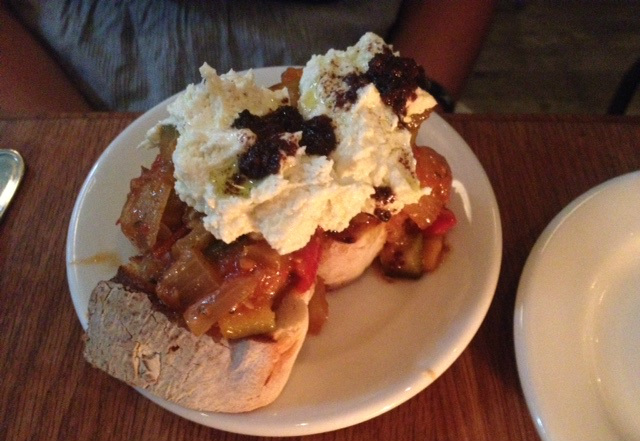 The Ratatouille Tarinette at Buvette New York by Anne McCarthy

My dining partner, a new friend in New York City (who has, like me, spent considerable time living in Ohio), ordered the ratatouille tartinette, which contained ratatouille, tapenade, and chèvre. As a vegetarian, the options were limited for her (as they often are for vegetarians eating French food). As we sat longer, the restaurant continued to fill up and the noise of chatter and clinking forks grew louder. We both waved away a dessert menu, surprisingly full after the small plates.

Buvette is one of many French restaurants in New York with serious clout. French restaurants are so popular and so revered (what could be better than French food?) that they run the risk of becoming cliché and slapdash. But Buvette – and several others – are the exception.

So, santé – to many more French dishes and the adventures which often follow.