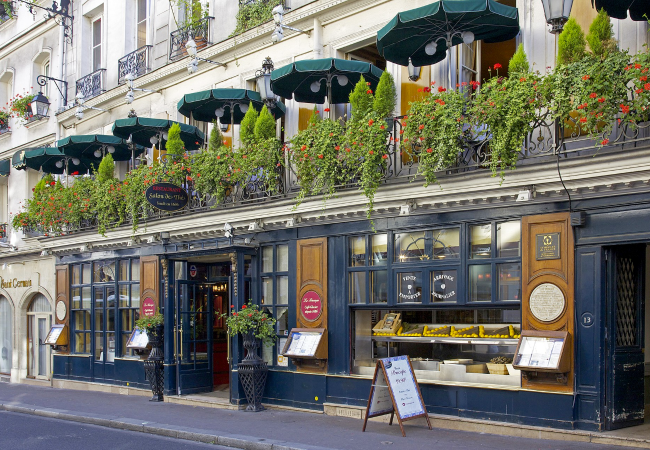 A slice of history goes well with a nice restaurant meal and it’s a combination easily found at Le Procope, just up the road from the Odéon metro station in the 6th arrondissement. For there you can find traces of the Revolution, the Enlightenment and heavyweight 19th-century authors like Balzac while enjoying some of the same traditional French cuisine which has been served here for over three centuries. Little wonder then that the restaurant is officially classified as a monument historique.

The signs displayed outside are enticing. “Café-glacier depuis 1686,” reads one, making it the oldest café in Paris if you discount the fact that it closed down for a period in the 19th century. In the late 17th century it was, continues the information panel, almost certainly the first restaurant to serve coffee, the fashionable drink newly arrived from Italy. What’s more, it was brought in porcelain cups to customers at their table. All of this was new, and it was the beginning of Parisian café culture.

Le Procope opened its doors in 1686, the brainchild of Sicilian Francesco Procopio dei Cotelli, who opted from the outset for a luxurious atmosphere, choosing crystal chandeliers, mahogany and velvet for the décor. Trade was brisk from the beginning, boosted by actors and audience members from the Comédie Française theater which at that time was just across the road. The novelist Alain-René Lesage was among the early customers and wrote delightfully of the bustling new restaurant where you would find “nobles and cooks, wits and sots, pell mell, all chattering in full chorus to their heart’s content.”

The atmosphere today may be a little quieter, but much of the décor has been kept. Indeed, it is said that the wallpaper has not been changed since 1832! The lady at the ticketed cloakroom desk smiled when I asked her if it was true, as I had read, that the restaurant has a little museum upstairs. “Ah,” she said, “the whole restaurant is a museum, madame. You will see.” We followed a waiter through a room with dark red and mustard-colored walls, covered in prints and framed documents where the tables – mainly full – were laid with white linen cloths, heavy cutlery and sparkling glasses. In the little corner reserved for us was a heavy old bookcase full of ancient leather-bound tomes and on the ceiling I spotted not just a copy of key text from the Revolution — the Declaration des Droits de l’Homme — but also an old-fashioned ironwork chandelier. Bliss for the history nerd!

But we had, of course, also come for the food. The classics of French gastronomy all seemed to be on the menu – soupe à l’oignon gratinée, sole meunière – and there was a separate section labeled nos recettes historiques with dishes like blanquette de veau traditionnelle and the intriguing tête de veau en cocotte, comme en 1686. What, I wondered, distinguished a veal casserole cooked in 1686 from one prepared in the 21st century? The set menu for lunchtime, le menu Procope, offered excellent value, although I slightly wished we’d come in the evening so I could enjoy the more extravagantly named menu philosophe. My trout with almonds was elegant and perfectly cooked, and the Coupe Amaretto to follow – ice cream and Chantilly cream drizzled with liqueur – was a treat. The coffee came with a little madeleine cake. Of course it did!

As for the whole restaurant being a museum, that’s exactly right. The restroom doors are labelled citoyens and citoyennes, the egalitarian terms which replaced monsieur and madame during the Revolution, and every nook and cranny is crammed with shelves and cabinets displaying objects and documents connected to Le Procope’s history. And it is  quite a history. It has been described as the “nerve center for the Revolution,” it was a go-to venue for some of the best-known Enlightenment figures and in the 19th century it was the favorite restaurant of many of famous novelists and poets.

The Café Procope, as it might be imagined in the 18th century in the background, from left to right: Condorcet, La Harpe, Voltaire and Diderot. attributed to Jean Hubert. Public domain.

Much of the Revolution was planned there and Danton, Marat and Robespierre are all said to have been customers. It was from Le Procope that the orders for the attack on the Tuileries Palace in 1792 were issued, and it is thought that the first red caps worn by revolutionaries were seen there. Among the documents on display are a fragment of Marie Antoinette’s last note, written at 4 a.m. on the day of her execution, in which she bids a heart-rending farewell to her children: “My poor children, adieu, adieu.” Just nearby is a sample of her husband’s writing, his request for a three-day stay of execution to give him time to “prepare himself to meet his God,” a plea which was rejected. A vivid memento from the period just after the Revolution is one of Napoleon’s bicorne hats, said to have been left deliberately in lieu of paying his bill!

Le Procope was also popular with the great thinkers of the Enlightenment period. Perhaps they were drawn by the intellectual atmosphere of a restaurant near the city’s best-known theater, then stayed for the food and the hospitality. Among them were Diderot and his co-editor Jean le Rond d’Alembert, working on their ground-breaking encyclopedia, a “book of knowledge” more comprehensive than had ever been written before. The philosophers Jean-Jacques Rousseau and Montesquieu were customers too and so was Voltaire, who is said to have tried ice cream here for the first time and commented that he found it “exquisite,” adding “What a pity it isn’t illegal!” There are even claims that Benjamin Franklin ate there, perhaps even working on the first draft of the American Constitution at one of the Procope’s tables.

The list of 19th-century authors who came to Le Procope is impressive and lengthy and includes the poets Alfred de Musset and Théophile Gautier, born in 1810 and 1811 respectively, and Paul Verlaine who was a generation younger. The novelists Honoré de Balzac, George Sand and Victor Hugo, all born on the cusp of the 19th century, were known to be customers and it’s fascinating to speculate on whether they were inspired by the broad range of people they mixed with while dining to create their characters. Surely, they must have been?

When the restaurant closed its doors in 1897, it must have felt like the end of an era. And when it reopened in 1957, of course it made sense to lean heavily on its reputation as a grand literary café from the previous century. However, on the day I visited, I seemed to be the only person admiring the wealth of exhibits and historical treasures on show. The tables were full of customers enjoying the food and very much living in the moment. They were almost exclusively French as far as I could see, surely an affirmation of the quality of the cuisine and the civilized, yet relaxed atmosphere. Whether you are in search of history or just hoping to find tasty, traditional French cuisine, you will not be disappointed. And if it’s a combination of the two you seek, then really, I can’t think of anywhere I would recommend more highly!

Every evening from 7 pm and Sunday lunchtime (except holidays)