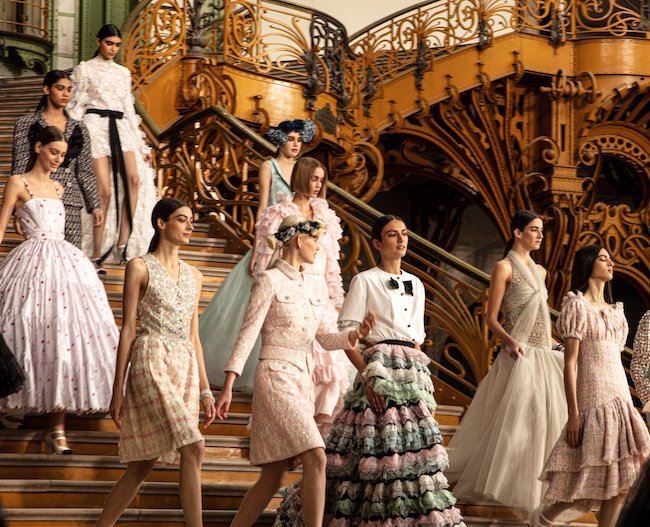 Couture: It’s what most people think of when they hear the words “fashion week.” Haute couture is about glorious excess, hand-crafted gowns, and design that reaches incredible heights of the utmost artistry. And when in the midst of a pandemic, outsized creativity, inspiration, and dreamy clothes feel especially welcome as a way to take our minds off the current state of the world.

Here are some of the Spring-Summer 2021 haute couture shows from January’s Paris Fashion Week that caught our eye:

It doesn’t get more iconic than Chanel, non? Not even a global pandemic can dampen the incredible, dazzling beauty found on Chanel runways. And this year was no different. Chanel delighted with its haute couture bridal-esque looks, which evoked a bucolic, bohemian spring wedding. Chanel’s creative director, Virginie Viard, described her latest collection as “more bohemian style – more a wedding or a family celebration in a village [rather than] the Ritz!”

Exquisite and ornate lace designs, glittering jackets, and tulle trailing behind models dressed in white all set the tone for a show bursting with life and joie de vivre. Livestock even made an appearance at this “countryside wedding.” A gorgeous white horse joined the runway and stood atop white and yellow flower petals. It was “too much” in the very best way.

Elsewhere on the Chanel runway, non-bridal looks included long pink coats, little black dresses, white pants with side detailing, prairie-looking frocks with bows and pastels, and bejeweled vests. Fun and frilly was the name of the game when it came to garments. And sleek – bordering on severe – hairstyles of blunt bobs and tight buns on models filled the runway. The accessories were, of course, top-notch: gold bracelets, white fishnet tights, statement necklaces, bowties, half-moon sunglasses, and flower headdresses galore.

Kim Jones has been crossing houses; the Dior artistic director lent a hand over at Fendi to create a super-stunning collection which premiered in video form. Of the show, 41-year-old Jones told Vogue, “It’s very personal to me.” Jones created the show in the spirit of a 16th-century Sussex retreat, Charleston Farmhouse, near the village where he grew up, and now owns a house. Jones told Vogue he wanted to create pieces that were “reactive to the time we’re living in.” And he was thoroughly successful in doing just that. Jones’s virtual Fendi show was a cornucopia of famous fashion faces: Kate Moss (and her daughter Lila), Christy Turlington, and Adwoa Aboah. Demi Moore opened the show, looking radiant in all-black satin, and Naomi Campbell closed the show in a sumptuous silver cape.

The looks these women and other models sported were nothing short of reactive to today’s time. In a time marked by cancellations, subdued enthusiasm, and staying at home in sweatpants, the Fendi show reacted to the drab reality of the present by propelling us into a brighter, warmer, more exciting future of spring and summer. Queenly capes, earrings that dripped down past models’ necks, glittery gowns with sheer overlay, glittering headpieces, and shiny dresses all filled the runway. One wonders if Jones took any inspiration from the Netflix hit show Bridgerton? The whole affair felt very regal and aristocratic. Meanwhile, the space, which resembled a hall of mirrors, was the perfect setting to elevate this ethereal show to another level. The Fendi logo could even be spied in the ceiling. No attention to detail was spared.

Models fanned out through the hall of mirrors, adhering to today’s socially distanced standards. And Cara Delevingne’s silky-looking trousers and suit jacket, paired with dramatic earrings, was one of several androgynous looks found in the Fendi show. Typically, haute couture shows focus on looks for women, but, in a nod to today’s gender inclusivity, perhaps, Jones included male models, and traditionally masculine looks on female models.

Dior’s Maria Grazia Chiuri’s opted for magical, mystical looks in the Dior haute couture show. The film presentation is “a story about this girl who goes inside a castle. It’s a labyrinth which represents an interior trip,” Chiuri told Vogue. “When she meets each of (the tarot) figures, she has to reach a decision about her life. And on the other hand, she meets aspects of her own personality and learns not to be scared of the future.”

What followed in the show was an otherworldly portrayal full of Renaissance looks of corsets, robes, and empire waist-ed dresses that looked ready to appear in a king’s court. Magical, mystical creatures roam the halls of the mysterious estate and lead our protagonist to a room filled with glittering stars. The end of the presentation features models standing completely still, as if they’re frozen in an oil painting from centuries ago.

There’s too much to unpack in this visual Dior feast in just one watch, so, for the committed fashionistas, I recommend at least two viewings.

Viktor & Rolf staged their show in what appeared to be an abandoned warehouse. But the drab décor was in total contrast to the Spring-Summer 2021 collection, which featured massive tulle skirts, ornate headpieces, nightclub-worthy makeup, and rainbow-beaded bralettes.

This house of Viktor & Rolf made no secret of the fact that it’s ready for a return not just to “normal” – but a return to fabulous. As techno beats played and models’ skirt circumferences reached wide proportions, it was clear the duo took the “go big or go home” mantra into account for the staging of this epically colorful, fun show. We can only hope that Spring and Summer 2021 itself delivers in the way these clothes did.

Lead photo credit : The refined allure of Haute Couture — a cortege of models came down the stairs of the Grand Palais in Paris at the CHANEL Spring-Summer 2021 Haute Couture show.​ Photo credit © CHANEL, Facebook