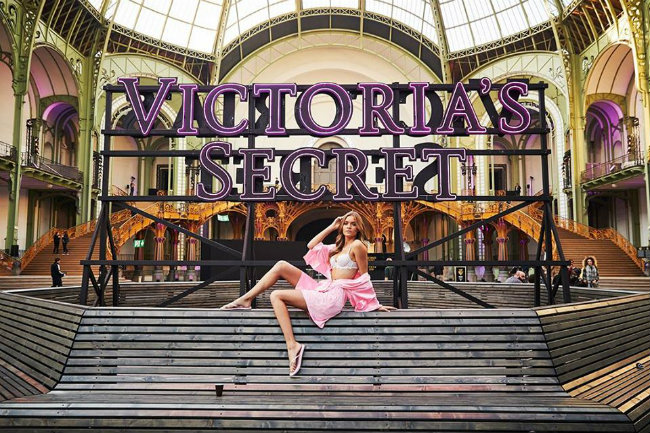 One of the most notable “angels” in Paris sits atop the Colonne de Juillet at Place de la Bastille.

Though it looks like an angel, the sculpture is actually the Génie de la Liberté. (The image is familiar for another reason – besides its prominent locale – it appeared on ten franc coins.)

Paris was flooded with real-life human angels on Wednesday, November 30 for the annual Victoria’s Secret Fashion Show, which crossed continents for its first-ever Paris show. (The show will air in the U.S. on December 5 on CBS at 10pm EST.)

It was held at the Grand Palais, with beautiful sounds of a string orchestra filling the air before the lights went down. Musical talent was abound, with artists Bruno Mars and Lady Gaga performing during the show as well.

The lingerie company’s runway shows began in 1995 as a way to drum up publicity for the brand. The infamous Plaza Hotel in New York City was the site of the first show.

Since 1995, the show has grown into a behemoth of a colorful, sexy spectacle. And the Victoria’s Secret brand has been a launching pad for the careers of mega-supermodels like Heidi Klum, Tyra Banks, and Gisele Bündchen.

At the November 30 show, angel legends (and Victoria Secret O.G.’s) Alessandra Ambrosio and Adriana Lima were on the runway. They were joined by up-and-comers (who have already made names for themselves in their own right) Gigi Hadid and Kendall Jenner. In total, there were 51 angels on the runway, with many sporting gravity-defying wings, diamond-encrusted lingerie, and of course, confidence-oozing struts.

The forty minute show was a minute-by-minute reminder of why the brand continues to be a massive success: Victoria’s Secret isn’t just selling bras, fragrances, robes, and underwear – they are selling an ideal, an attitude: one of self-love, self-confidence, and unapologetic sexiness. Those traits – as conveyed in marketing – don’t just drive profit and move merch, they are important for women (mostly, the first two traits).

In the words of the great Lucille Ball, “Love yourself first and everything else falls into line. You really have to love yourself to get anything done in this world.”

Notable show highlights included the singer The Weekend serenading Bella Hadid, his ex-girlfriend. (Hadid’s younger sister is Gigi Hadid, who also appeared in the 2015 show.) Elsa Hosk wore a huge Chinese dragon around her torso. And model Jasmine Tookes, wore a bra worth $3 million, which was made using a mold on her body.

Tookes told USA Today: “It is so beautiful. It’s covered in white diamonds and emeralds and it has about 9,000 gemstones.”

This year’s show was only the second time it was held outside of the U.S. (The show was in London in 2014.)

Some critics lambasted the transparency of this move to Paris – saying it was purely a marketing ploy, as the brand works to expand their marketing globally.

Although that is a valid theory, it’s amusing to imply one needs an ulterior motive to hold a show in Paris, or simply visit Paris. After all, Paris is Paris. It’s incomparable.

As Sabrina said in the eponymous film: “Paris is always a good idea.”