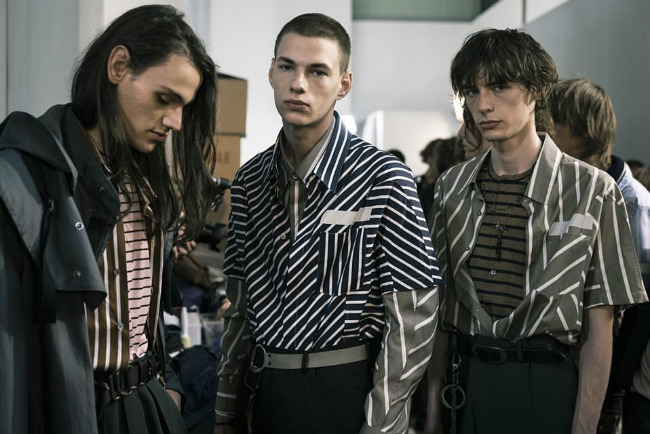 Zoolander 2 came out earlier this year, and the world cheered (well, I cheered) at the return of the fashion industry’s most infamous fictional male model, Derek Zoolander.

Real-life male models took to the Parisian runways last week to model Spring 2017 fashions. The fashion world is always many steps ahead (which I think accounts, in part, for how cyclical it is). The catwalks showed a range of styles and trends, some old and some new.

At Lanvin, one model wore a shirt that looked like it was cut from the same cloth as Joseph’s Amazing Technicolor Dreamcoat. The theme of layers ran throughout the show, with long coats flapping as the models walked. Lots of necklaces and belts and scarves were added to the apparel, giving each of the outfits an individualized look. Some of the trousers ran high, giving a “flood” style appearance.


Paul Smith put on a happy show, full of many colors and bright socks. The show was held at Bourse de Commerce. The catwalk was painted bright colors, in keeping with the colorful theme of the line. Smith said that the line was inspired by late nights out in the 1960s on Wardour Street in London, at places like The Flamingo Club and Whiskey a Go Go.

Dior Homme, helmed by a Belgian, Kris Van Assche, created a miraculous feat with a “utopian funfair” creation of twisted metal and glittering lights, which served as the model’s backdrop. There was a punk feel to the show and splashes of sporty styles, befitting of a spring show. As it was Paris, there was a lot of black, as to be expected. Reds, whites, beiges, and army greens also made appearances.

“There’s no need to put a classic suit on the stage,” Van Assche said before the show, as reported by Vogue. The house of Dior has always been a titan in fashion, for both men and women’s styles, and Vas Assche’s show lived up to the house’s provocative and excellent reputation.


The Comme des Garçons Shirt show is unofficial, but officially hotly anticipated by fashion critics and fashionistas, buyers, and editors. It was held Saturday morning in a small showroom at Place Vendôme. The focus was on the tees, but also the combinations the simple clothing article allowed for: long striped shorts with Chuck Taylors, sweatshirts and rolled up sweatpants, blue collared shirts and wide grey shorts, button up collared shirts with a bucket hat, and an incredible shirt which was reminiscent of Phantom of the Opera, in its deep contrast and look of the phantom’s mask – one side was green and black army-like fatigue patterned, and the other was a classic stripped button-up. Other Comme des Garçons button-ups featured similar pattern contrasts, and the shirts with cartoon graphics on them brought levity to the show.

French luxury brand Hermès had a good showing for the season. Bright colors like yellows stood out strongly. As the company is one that is best known for their handbags, bags were an important part of the show too. Lots of bomber jackets and cardigans were worn, giving it kind of a Grease-era Americana feel.

Other houses like Christophe Lemaire, Valentino, Balmain, Louis Vuitton, Givenchy, The Kooples, and more, all brought strong spring lines. Derek Zoolander was not on the runway, but the beautiful models were no doubt channeling his “Blue Steel” look from time to time.