Fashion Freak Show, held at the legendary Folies Bergère until April, is a window into the intriguing mind of proudly freakish fashion designer Jean Paul Gaultier. It delivers an extravagant retrospective celebrating the icon’s life and career via the medium of costume, dance, music and humor.

Yet who takes centre-stage in Gaultier’s public memoirs of the celebrities he has dressed over the years? Kate Moss? Kylie Minogue? Madonna? On the contrary – according to Gaultier, the “real” star of the show is a 63-year-old teddy bear by the name of Nana.

While the celebrities are present in the story, Gaultier amusingly credits the inanimate cuddly bear for first helping his fashion ambitions come to life. In childhood, he had embarrassed his straitlaced parents by pleading for a blonde-haired Barbie. Believing, not unreasonably, that a Parisian boy might be teased relentlessly for coveting a doll, they compromised by buying a teddy instead. Fashion history had begun!

A young Gaultier cheerfully set about mutilating the poor bear – stabbing at him with sewing needles, performing “open-heart surgery” and, finally, creating the first ever version of the conical bra for him to wear – at just six years old. 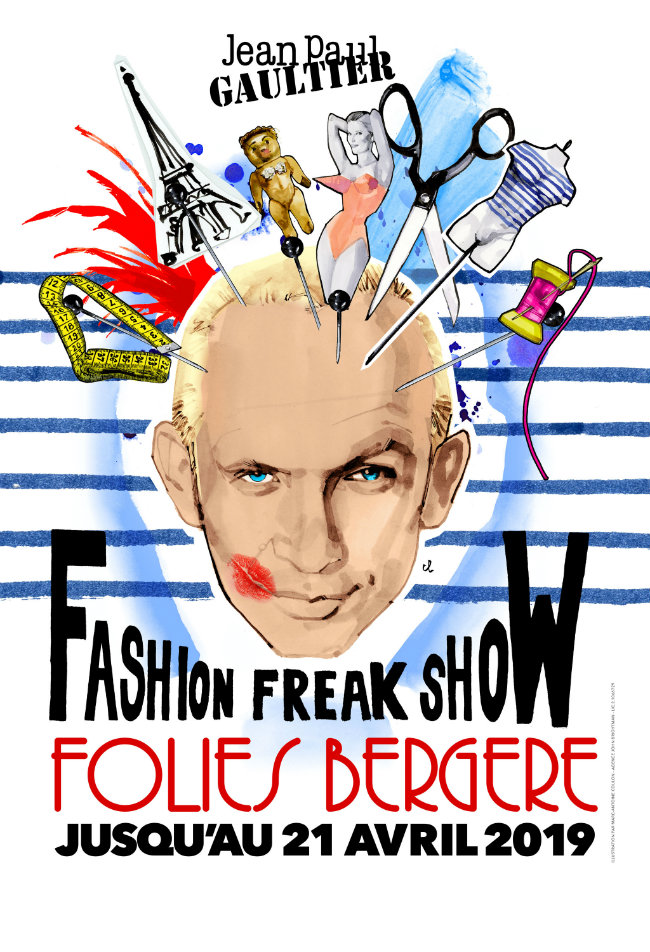 More than three decades later, he would earn worldwide success creating an identical costume for Madonna. Yet while she had made his creation famous, in Gaultier’s eyes, the bear had modeled it first! Even today, he will claim with a straight face that the proudest achievement of his career was dressing his teddy – not to mention daubing him with neon green eyeshadow.

This background explains the bizarre opening scenes, which include a parade of dancers dressed in fluffy bear costumes. Those without knowledge of the designer’s past might confuse it with a skit revisiting Miley Cyrus’s performance at the 2013 VMAs – but its origins are several decades older.

Next, the audience are taken on a journey back in time to Gaultier’s childhood classroom, where he is ridiculed by his disapproving teachers for surreptitiously drawing fashion illustrations at his desk. He is paraded through the school as a punishment, with his drawings taped to his back, as the other children chant and laugh at him. 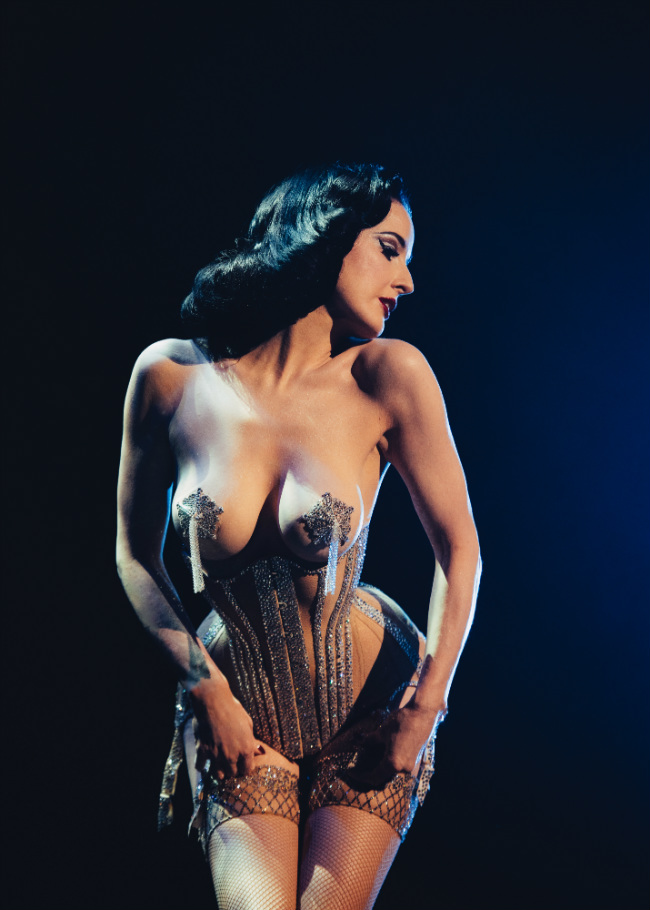 When I ask special guest star Dita Von Teese whether this type of mockery might actually be a compliment – an indicator of individuality – she laughs knowingly. “Exactly – pretty much every artist I know has had an experience like Jean Paul’s,” she muses. “To be different and to do the things that are interesting and celebrated, you have to take risks and you will inevitably be mocked… but I love that moment in Jean Paul’s story because of the way he reacted. It’s not like he ran away crying. His reaction was to do it more. He’s like, ‘I’m getting made fun of, people are laughing – I should make people laugh more!'” 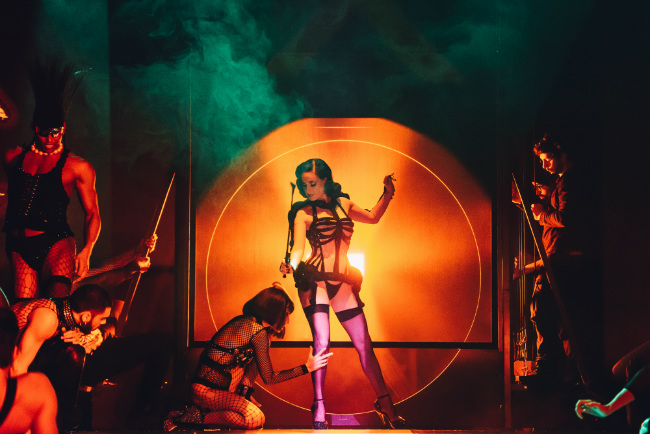 That vision sets the tone for the rest of the show. Gaultier’s self-deprecating humor is totally devoid of ego – and as if to prove that he is unconcerned about being mocked, he even makes a joke of himself. In one act, a conversation unfolds between women wearing counterfeit versions of his clothes. “Is it an original?” “No, but everyone thinks it is.”

Incidentally, in the past Gaultier has even been willing to sabotage his sales for the sake of some satire, joking, “People can dress well for not too much money – so why go and buy expensive clothes?” His recommendations for shoppers? High street brands Zara and H&M. 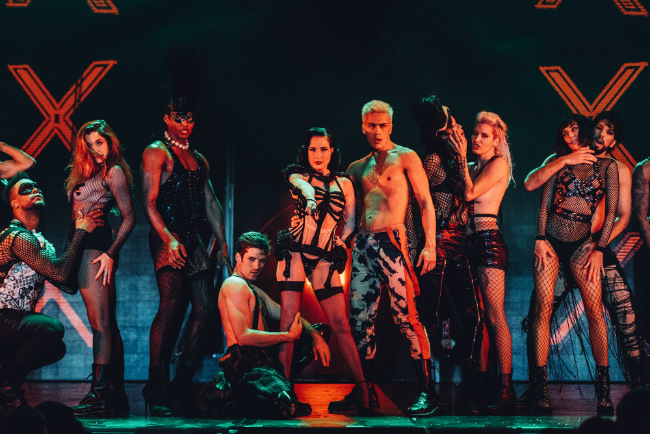 Joking aside, the show is also an opportunity to examine some of Gaultier’s best stylistic moments. Dita Von Teese is no stranger to the secret archive collections held in his Parisian atelier. She covets a former “Russian military themed collection” and still owns a dress from it today, “with beautiful braiding down the front” – but for the shows, she has been vamping it up in corsets and stockings. Anyone who is a fan of Gaultier’s quirky, off-beat fashions – or, for that matter, his more traditionally French Breton striped sailor shirts – will love the sartorial element of the show. 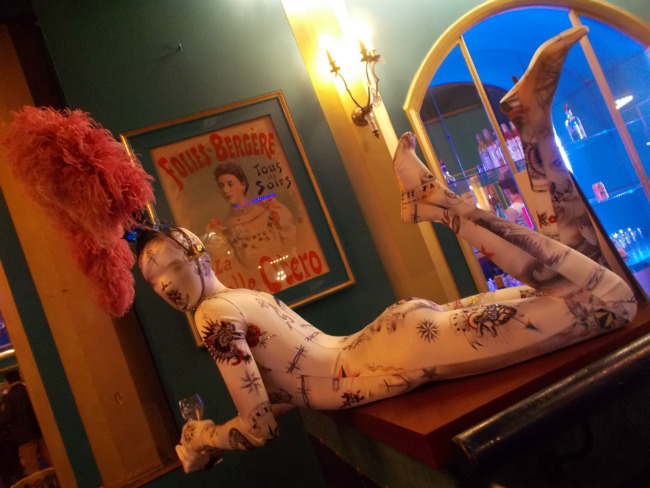 Other stars who play a part include Gaultier’s former Eurotrash co-presenter, Antoine de Caunes, who dresses as the Queen of England in drag, and Eurovision singer Conchita Wurst. Gaultier also pays homage to Josephine Baker, whose final performance at the Bobino he saw a week before she died, and the lustrous history of the Folies Bergère itself.

Musically, the show highlights the 70s, with hits including the original pre-Kanye West version of ‘Move On Up (Touch the Sky)’ by Curtis Mayfield and Chic’s irresistibly funky ‘Le Freak’. An amusing reworking of an 80s Cyndi Lauper classic then reminds us that ‘French Just Wanna Have Fun’. If you enjoy revisiting the nostalgia of retro disco music, it’ll be difficult to resist the temptation to spring out of your seat and dance. 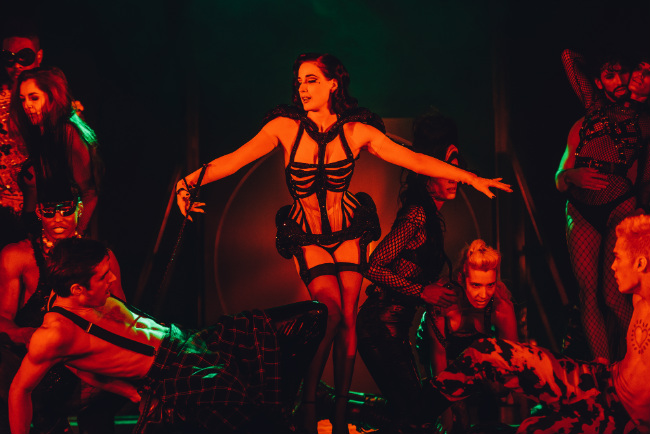 To sum up, guests can expect men in eyeliner, acrobats in chain swings, Josephine Baker inspired banana skirts on both genders and a feast of unapologetically camp music and costume. From the moment you step into the opulent entrance hall, with its huge Pegasus statues and figurines dressed in feathery mohawks and Gaultier corsets, until the moment you leave, the entertainment is electric. 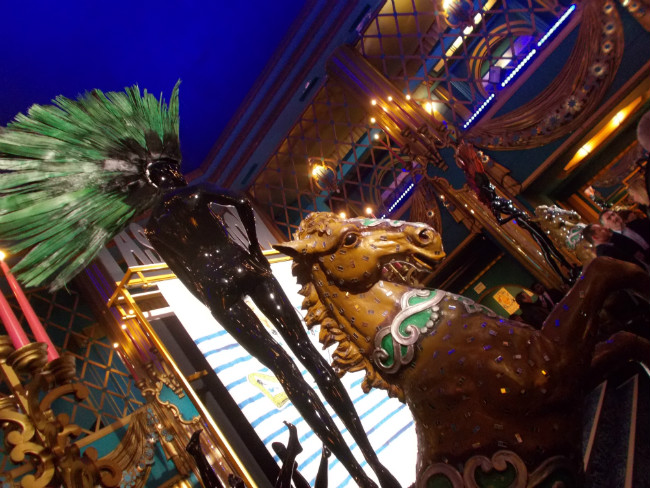 The over-arching highlight of the show, of course, is the reminder that “le freak – c’est chic“. Meanwhile, Gaultier has achieved a lifetime ambition held since the age of six – to create a revue starring Nana. Kitsch, fun and enormously uplifting, it’ll be a challenge to walk out of the show without a broad smile.