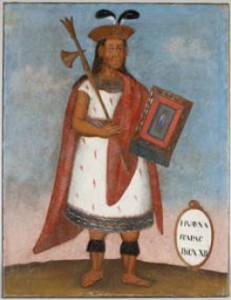 The Inca and the Conquistador

Under the Spanish empire of Charles I, with its great thirst for gold and conquests, continues the exploration of the Pacific Ocean and the South American coast, At the same time on the Amerindian coast, Atahualpa comes to power of the greatest Inca empire ever know, coinciding with the arrival of Pizarro and his conquistadores.
The exhibit illustrates the parallel courses and clash of these protagonists, through key events in the history of the South American continent. Presented in the form of a dialogue, the Inca and Hispanic objects, paintings, maps and engravings of the period highlight the clash between two radically different worlds, undergoing a profound political, economic, cultural and religious revolution.

Open every day 11am to 7pm. Thursday through Saturday until 9pm. Closed Mondays.