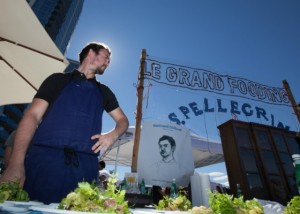 Le Fooding is pulling out all the stops to celebrate its 15th anniversary with a special event from June 5-7 in Paris. Not just any celebration for the famed organisation, which was founded in 2000 as a new culinary movement and publishes an annual guide. Le Fooding will be hosting a three-day food frenzy called La Revanche des Faubourgs, which aims to “highlight the shift in creative energy from strictly city centers to their surroundings.” They’ll be paying tribute to different faubourgs around the world—like Northeast Paris, Shoreditch, Brooklyn, Queens, San Francisco’s Mission District—where they’ve seen a surge in culinary creativity in recent years. Bref, some of the world’s hottest chefs—particularly those who have been “actors in the reinvention of their neighbourhoods”—will be participating in different events. Ticket prices start from 35 € for individual events, and a portion will be devoted to charity.

See event website for information on specific locations and dates.